He records the music you hear, trains the next generation of audio engineers, and, in his spare time, has mixed and mastered Grammy-nominated releases 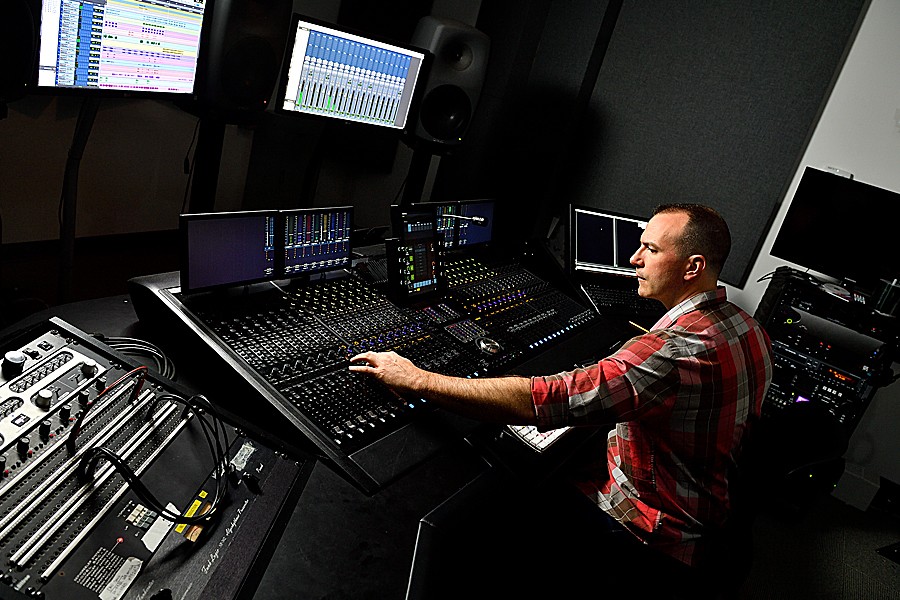 Image caption: Ed Tetreault, now in his 15th year as manager of Peabody's Recording Arts and Sciences Department, in the cutting-edge Studio A. "I pretty much feel like I work at Disneyland," he says.

Editor's note: This is the first in an occasional series of Q&As that we're calling Who Does That? It's your opportunity to meet the people who help make Johns Hopkins run and learn about the interesting work they do. Have a suggestion? Please email us at hubatwork@jhu.edu.

If you've ever tuned in to a livestreamed Peabody Conservatory performance or listened to a recording of Peabody musicians, you can be forgiven if you focused your attention and appreciation on the music itself (we get it, they're magical sounds!). But if you've never given a thought to the skill and effort that go into ensuring such sounds are reliably and faithfully captured, balanced, and recorded—not to mention archived and preserved for future audiences—here's your chance.

We sat down in Peabody's Studio A with Ed Tetreault, now in his 15th year as manager of the Recording Arts and Sciences Department at Johns Hopkins' Peabody Institute, to talk about managing the day-to-day work of a recording studio, what makes Peabody's recordings stand out, what he loves most about the job, and, well, read on ...

Can you give us a quick explanation of what the Recording Arts and Sciences Department is?

It's kind of unique here at Peabody because first and foremost we are an academic department, but we are also a service department for the school. We typically will record up to about 1,000 events a year, between concerts, recitals, and recording sessions. So our recording facilities get used for academic instruction but also get used to provide recording services for the Peabody Conservatory. It works out incredibly well because we meet the needs of the conservatory and at the same time give our students the hands-on experience that they need.

Busy! I have students working for me between 9 and 5, and we function as a full-fledged recording studio that serves the Hopkins community, so people will book time in the studio and my students staff those sessions and I oversee them. And right now I'm teaching three classes, as well as occasionally teaching at the JHU-MICA Film Centre. So I feel like I'm teaching all day, every day, which I love. But we're a recording studio, so we have all the day-to-day tasks—like the microphone inventory that's going on right now, or later today there will be video editing. Tonight there's going to be a concert by the Peabody Chamber Orchestra, and we'll be recording and livestreaming that as well.

Livestreaming is probably one of those things that wasn't even a thing when you started, right?

Yes, one of the major changes that I've seen in my job in particular is this transition to me being in more of an IT role. So we're still using an analog console like they did way back in the day, but now we have this other component, too—network-based audio and livestreaming feeds. It's kind of neat. It's been a bit of a challenge, but thankfully the IT department here is fantastic. We'll see more and more livestreaming, and next year we'll be implementing a network-based audio and video capture system.

Keeping up with technology is a constant challenge, but what I do that helps a lot is that I keep my ear to the ground, but also I listen to my students. They're out at internships, working at different places, and they'll come back and say, "Hey, here's how they're doing this where I was working." So I have feelers out there, even with alumni. We have an amazing network of alumni. A good example is Lawrence Manchester, who does all the live mixing for Jimmy Fallon. So when the audio engineering convention is in NYC, we've been able to arrange tours, which is fantastic. Another alum, Josiah Gluck, does all the live mixing for Saturday Night Live, so we're been able to tour there as well.

How do these facilities at Peabody compare to recording facilities in the real world?

A large part of my job is basically ensuring that the facilities that we have here are representative of the most current trends in the audio engineering world. So Studio A is centered around this Neve 88RS console. It's the same console that you would find in Abbey Road Studios or Skywalker Sound. It's pretty much the Rolls Royce of analog consoles, so our students are getting experience on a high-end console that would translate to using any other high-end console that they might encounter.

What makes the Recording Arts and Sciences program special?

What's interesting about our students is that they are doing a double degree. They have to make it into Peabody with an instrument or in composition, and then they can do this program. And they also take classes at the Whiting School of Engineering—we're looking for math and sciences—so it's a nice tie-in with the Homewood campus. That combination of high-level musical training along with high-level music engineering is really desirable to a lot of industries today. They're looking for students who do it all, and our students do.

What's your favorite thing in this studio?

I pretty much feel like I work at Disneyland. I'm incredibly lucky to come to work every day and do something that I love, which is recording music and teaching. I don't know if I can really pick one thing. One of the aspects of our audio engineering is that we always are on the cutting edge, but what's interesting is that a lot of today's equipment is inspired by equipment from many, many years ago. So we have a neat collection of gear that's vintage, from a 1914 Victrola to a 1960s plate reverb that was part of RCA Studios in New York. We have it and use it and teach our students to use it.

There's a lot of cool equipment here. Do you ever just come in and make crazy sounds or mixes, or jam out?

Well, I'm here using it every day. But one of my guilty pleasures is listening to Pink Floyd's Wish You Were Here in our control room with surround sound. If I need to relax, I'll put that on, and it sounds amazing.

You do freelance music engineering on the side?

Those sound like memorable career moments. What's another memorable moment or project for you?

Recently a jazz musician was talking to me about a CD and was saying, "This particular CD was completely the cause of me picking up my saxophone again," and as we were talking about it, I was like, "Wait a minute, what CD was that?" and he said it was Ellery Eskelin's Mirage that was recorded at Towson University, and I was like, "Wait a minute, I recorded that." He said it changed his life because it caused him to start playing again, and that to me felt really good. One of the most gratifying things is knowing that people are hearing the work that I'm doing.

What do you most want people to know about the work done here?

I guess I would love people to think about the Recording Arts and Sciences Department as being the sound of Peabody. I feel like a lot of the techniques that we teach, the [performance] halls we have here on campus, and our general approach to capturing sound has given our recordings a highly recognizable character over the years. That stems all the way back to 1983, when Alan Kefauver started this program. He was the one who hired me, and that was something I learned from him. We have a certain sound, and we represent Peabody to the outside world. I'd like to keep that up.