In addition, more than 64 percent of staff completed this year's survey, up from 55 percent

The results of the university's 2018 Employee Engagement survey are in—and the numbers are up. Staff members who responded to the survey, conducted in March, reported an overall increase in engagement: a "grand mean" of 3.88 on a five-point scale this year compared to 3.80 in 2015. Now, university leaders say, there is important work to be done to delve into the data and develop strategies to build on that momentum.

In the survey that it distributed to university and health system staff, Gallup used a combination of its core "Q12" questions, which were also used in 2012 and 2015, and several questions specifically written for Johns Hopkins. In addition, a series of open-ended questions on inclusivity and engagement gathered more than 1,500 comments.

Sixty-four percent of staff across the university completed the 2018 survey, up from 55 percent in 2015.

"As the Human Resources team continues to analyze the data and work with area managers to review their results, I would like to thank everyone who participated," said Heidi Conway, vice president for human resources, in an email to university employees. "We plan to use the results from the 2018 survey to build on successful initiatives that resulted from the 2012 and 2015 surveys, such as expanding leadership development and renewing our focus on clear goal-setting and skillful performance assessments. We will also begin new initiatives in areas where there are opportunities for growth."

Managers who have more than five employees who responded to the 2018 survey will receive an email from Gallup next week with a link to access their results. Human Resources representatives in each division are available to help managers access, read, and interpret the reports, and to develop action plans.

The Human Resources team has already taken action on one piece of data. Only one in three workers in the 2018 survey said they strongly agree that they had received recognition or praise for doing good work in the last seven days, which is consistent with national data reported by Gallup. In response, the university is introducing a new function in the SuccessFactors Performance system that allows employees to recognize co-workers with an electronic badge. When someone is recognized by a peer within SuccessFactors, a badge appears on their Performance homepage and a note is sent to their manager.

This new feature will support workplace recognition, which "motivates employees, provides a sense of accomplishment, and makes employees feel valued for their work," Conway said.

More information about the survey and employee engagement efforts at the university is on the Employee Engagement at JHU website. 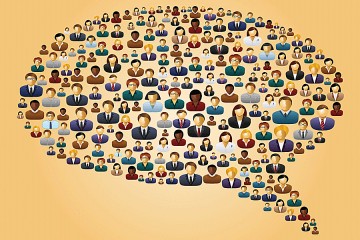 Published Feb 19, 2018
Here's how you can do your part in building a better Johns Hopkins