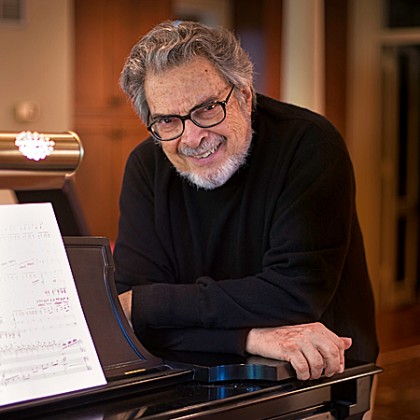 A near-capacity crowd filled New York City's Town Hall for the Peabody Chamber Orchestra's April 15 concert featuring Leon Fleisher as both conductor and pianist. Fleisher, who holds the Andrew W. Mellon Chair in Piano at Johns Hopkins' Peabody Institute, led the orchestra in a reprise of the all-Mozart program they had performed two nights earlier in Peabody's Miriam A. Friedberg Concert Hall: Mozart's Symphonies No. 1 and 41, and the Piano Concerto No. 12, which Fleisher led from the keyboard.

Presented by the People's Symphony Concerts of New York, the performance was a celebration of Fleisher's 90th birthday and nearly 60 years on the faculty at Peabody. It also marked the first appearance by a Peabody ensemble in New York since 2006.

Wycliffe Gordon, who has been named Jazz Journalists Association Trombonist of the Year for the 10th time, joins Johns Hopkins as a visiting artist in Jazz Studies for the 2018-19 academic year. Gordon will conduct lessons and master classes with Peabody students during his fall and spring semester residencies on campus. 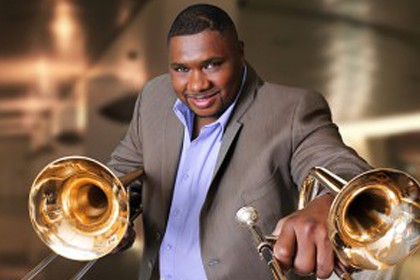 Gordon's successful performing career includes frequent critically acclaimed solo performances and tours leading his quintet-Wycliffe Gordon and His International All-Stars-at legendary jazz venues and performing arts centers throughout the world. He received the 2017 International Trombone Association Award, recognizing the highest level of creative and artistic achievement; recently accepted the Louie Award honoring his dedication and commitment to the music of Louis Armstrong; and has been named Best Trombone by the Downbeat Critics Poll four times. Commissioned frequently, he has an extensive catalog of original compositions that span jazz and chamber music, and his arrangement of the theme song to NPR's All Things Considered is heard daily across the globe. A former veteran member of the Wynton Marsalis Septet and the Lincoln Center Jazz Orchestra, Gordon has been a featured guest artist in Billy Taylor's Jazz at the Kennedy Center series. He is also a committed music educator and currently serves as artist-in-residence at Augusta University.

Under the Conservatory's new Breakthrough Curriculum-designed to help students gain skills in performance excellence, career development, and citizen artistry to meet the demands of today's ever-changing musical landscape-Jazz Studies is becoming increasingly integrated with other programs across the Conservatory and is expanding its connections to communities across the region.