Sixth annual Out of the Darkness Campus Walk raises $11,000 for the American Foundation for Suicide Prevention 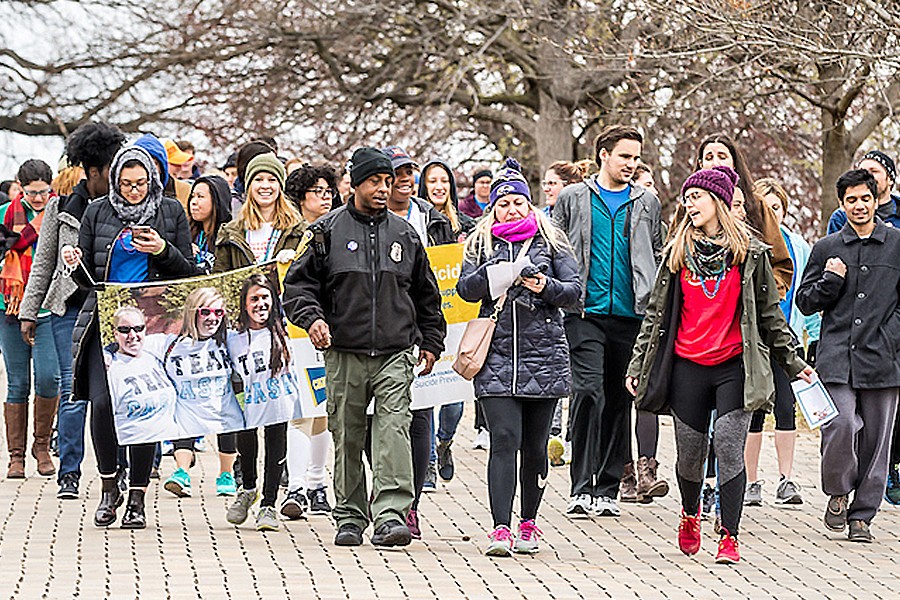 Image caption: Participants walk through Patterson Park during the Out of the Darkness Campus Walk

One hundred fifty Johns Hopkins students, staff, and faculty and community members gathered at the JHU School of Nursing on Saturday, April 7, to honor those lost to suicide, raise awareness about mental health, and raise funds for suicide prevention. The sixth annual Out of the Darkness Campus Walk, hosted by the Johns Hopkins Student Assistance Program, had the highest number of participants to date and raised more than $11,000 for the American Foundation for Suicide Prevention, or AFSP.

"Our partnership with JHSAP has been a very successful one," said Kathrin Olbrich of AFSP Maryland. "Not only in raising funds for the foundation but also in raising awareness for mental health and suicide prevention on campus and in the surrounding neighborhoods." 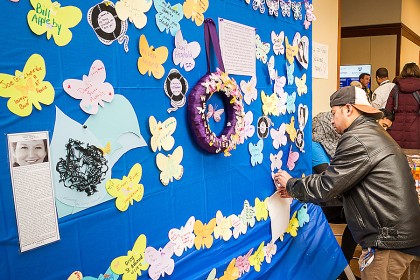 Image caption: The memorial board

Before taking to the streets for the 2.5-mile roundtrip walk to Patterson Park, participants donned colored beads that indicated their relationship with mental health struggles and suicide, added notes to a memorial board for lost loved ones, made posters at the craft table, commemorated the event in the photo booth, and warmed up with stretching and light yoga. Two student speakers shared their experiences with depression and efforts to build resilience, followed by a performance of Peter Gabriel's song "Don't Give Up" by Sabrina Scarborough, of the School of Nursing's Finance and Administration Office.

The 10th leading cause of death in the United States, suicide accounts for nearly 45,000 deaths a year. It most often occurs when stressors and health issues converge to create an experience of hopelessness and despair. Mental health conditions such as depression, anxiety, and substance problems increase the risk, especially if not treated.

"To be part of this community whose members are all impacted by suicide created an intense atmosphere of support," said Megan Barrett, director of student affairs at the School of Nursing. "The walk portion of the event evoked a sense of pride because we were physically 'walking out of the darkness and into the light' by spreading awareness about depression and suicide, and diminishing stigma together."

Since 2013, the Johns Hopkins Student Assistance Program has raised more than $50,000 for the American Foundation for Suicide Prevention, which raises awareness, funds scientific research, and provides resources and aid to those affected by suicide. The 2018 walk is accepting donations through June 30. Individuals interested in participating next year may join the listserv by emailing sympa@lists.johnshopkins.edu and writing "Subscribe out-of-the-darkness-walk@lists.johnshopkins.edu paul.dobbyn@gmail.com" in the subject line.

Mental health issues and suicide impact many individuals, workplaces, and families through experiences with friends, loved ones, colleagues, or personal struggles. If you or someone you know is struggling with suicidal thoughts, help is available here: