Hae-Ra Han and Nancy R. Reynolds to be inducted into International Nurse Researcher Hall of Fame

Hae-Ra Han, a professor in the Department of Community-Public Health, and Nancy R. Reynolds, associate dean of global affairs, have been selected for induction into the Sigma Theta Tau International Honor Society of Nursing's International Nurse Researcher Hall of Fame. They were chosen for their significant international achievement and research that has improved communities and the profession, and they will be recognized in July at the STTI 29th International Nursing Research Congress to be held in July in Melbourne, Australia. 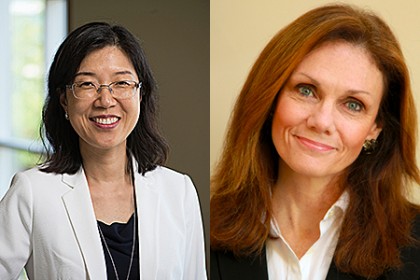 As an advocate for underserved populations, Han researches health literacy interventions to reduce disparities in chronic care, particularly among ethnic minority and immigrant populations. She has studied breast and cervical cancer among Korean-Americans and women living with HIV, and cardiovascular health promotion among Korean and Latino immigrants and low-income African-Americans. She is an adjunct professor at the University of Technology, Sydney; co-director of the JHSON's Center for Cardiovascular and Chronic Care; and associate director for implementation of the Center for Innovative Care in Aging.

Reynolds focuses on the complexities of self-care behavior, treatment engagement, and medication adherence among people living with chronic illnesses. Through numerous interdisciplinary trials, she has tested interventions that use low-cost cellphone technology to bring health care services to vulnerable populations affected by HIV, and she has led NIH-sponsored studies in India, Ghana, and the United States to enhance treatment adherence and health outcomes of vulnerable HIV-positive women and children.

Kamila Alexander, an assistant professor in the Department of Community-Public Health, was selected as one of five finalists for the Society for Adolescent Health and Medicine's 2018 New Investigators Award for her abstract "'Having a Child Meant I Had a Real Life': Childbearing Motivations and Reproductive Coercion Among Urban Socioeconomically Disadvantaged Black Young Men."

Yovan Gonzalez, a student in the Doctor of Nursing Practice program, received the 2018 Substance Use Disorders Evidence-Based Practice Training Award from the American Association of Critical-Care Nurses and the National Institute on Drug Abuse. The funding will help his project "Advancing Nurses' Knowledge and Skills to Address Substance Use in an Ambulatory Care Center." In his own practice, Gonzalez has worked to provide brief interventions, treatment, and referrals for all his patients based on risk level; he is also approved to prescribe buprenorphine.

Elizabeth Sloand, an associate professor in the Department of Acute and Chronic Care, has been selected as a 2018 fellow of the American Association of Nurse Practitioners. Sloand will join a group of leaders whose scholarly and forward-thinking contributions have led to meaningful improvements in health care and the nurse practitioner role. She will be inducted at a special ceremony in June. Her work as a nurse educator, researcher, and community care provider focuses on uninsured and underinsured children and youth in East Baltimore and Haiti, and in other Caribbean nations. Her medical missions in rural southwest Haiti have enabled SON students to provide episodic direct primary and preventive health care to impoverished families as part of their training in community health nursing.

Three School of Nursing students were selected to serve as Advocacy Leaders with the Graduate Student Nursing Academy, a program launched by the American Association of Colleges of Nursing. The Advocacy Leaders group consists of two representatives from each state plus Washington, D.C., and Puerto Rico. Doctor of Nursing Practice student Emerald Rivers and Master of Science in Nursing Entry Into Nursing Program student Jenna Oien will represent Maryland. Master of Science in Nursing student Jung Amaral will represent her home state of Washington. Advocacy Leaders participate in quarterly conference calls to develop their advocacy skills and become informed on the latest health policy discussions.