Joseph Silk honored for his 'lifetime of eminence in astronomical research'

Joseph Silk, the Homewood Professor of Physics and Astronomy in Johns Hopkins' Krieger School of Arts and Sciences, has been named the recipient of the 2018 Henry Norris Russell Lectureship by the American Astronomical Society. The award recognizes a "lifetime of eminence in astronomical research" and honors Silk for his "lifetime contributions to our understanding of the early universe and galaxy formation." 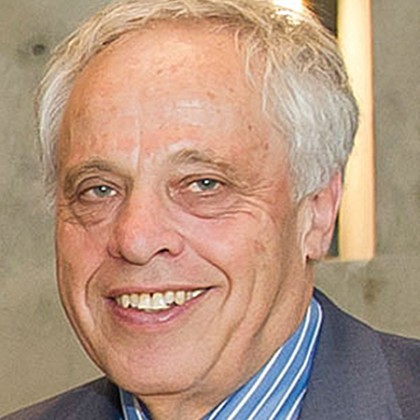 The author of more than 800 refereed articles and eight books, Silk conducted important early work on homogeneities in the cosmic microwave background and how they are influenced by density fluctuations in the matter of the early universe, in particular by a damping effect that bears his name. These were decisive contributions that helped transform cosmology into a high-precision science. He also has made pioneering advances in understanding the nature of dark matter and explored novel indirect methods for its detection. The latter have inspired very large experiments with new types of telescopes. His studies of galaxy formation and his work on the dynamics of mass loss and the feedback mechanisms from star formation and evolution have formed a very significant basis for subsequent work in this important field.

In 2011, Silk was awarded the Balzan Prize for his pioneering work on the infant universe; the $950,000 award is given annually to people or organizations that have made outstanding achievements in the fields of the natural sciences, humanities and culture, as well as for peace-promoting endeavors

More from the Krieger School of Arts and Sciences

Aaron Hyman, an assistant professor in the Department of the History of Art, has been awarded the 2018 Arthur Kingsley Porter Prize from the College Art Association for his article "Inventing Painting: Cristóbal de Villalpando, Juan Correa, and New Spain's Transatlantic Canon." The prize is awarded for a distinguished article published in The Art Bulletin during the preceding year.

Lawrence Jackson, a Bloomberg Distinguished Professor in the departments of English and History, has been nominated for the Mystery Writers of America's 2018 Edgar Allan Poe Award for his book Chester B. Himes: A Biography. These awards honor the best in mystery fiction, nonfiction, and television published or produced in 2017.

Yumi Kim, an assistant professor in the Department of Biology, is the recipient of the David B. Larson Fellowship in Health and Spirituality at the Kluge Center in the Library of Congress for 2018. The fellowship seeks to encourage the pursuit of scholarly excellence in the scientific study of the relation of religiousness and spirituality to physical, mental, and social health.

Christopher Lakey, an assistant professor in the Department of the History of Art, has received the College Art Association's Millard Meiss Publication Fund grant for his book, Sculptural Seeing: Relief, Optics, and the Rise of Perspective in Medieval Italy. The CAA awards grants through the Millard Meiss Publication Fund to support book-length scholarly manuscripts in the history of art, visual studies, and related subjects that have been accepted by a publisher on their merits but cannot be published in the most desirable form without a subsidy.

Erin Rowe, an assistant professor in the Department of History, was selected as the Edwin C. and Elizabeth A. Whitehead Fellow at the Institute for Advanced Study at Princeton for 2017-18. While at IAS, she will complete a book that examines the circulation of devotion to black saints from the 16th to the 18th century.

Sara Thoi, an assistant professor in the Department of Chemistry, was selected as a Scialog Fellow by the Research Corporation for Scientific Advancement. The fellows meet yearly to discuss new strategies to enhance energy storage technology and build collaborations among young investigators in the field.