Acclaimed violinist Judith Ingolfsson has been appointed to the Conservatory's faculty. She will begin studio teaching at Peabody in the fall 2019 semester but in the prior academic year, 2018-19, she will visit campus several times as a guest artist with the Duo Ingolfsson-Stoupel. 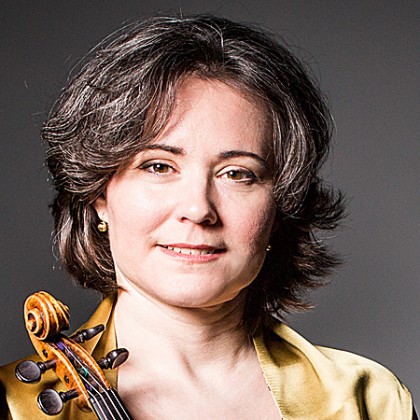 Recognized for her intense, commanding performances, uncompromising musical maturity, and charismatic performance style, Ingolfsson performs regularly as a soloist and chamber musician, and in recital as the Duo Ingolfsson-Stoupel, with pianist Vladimir Stoupel. Enjoying a global career, she has collaborated with conductors such as Wolfgang Sawallisch, Raymond Leppard, Gilbert Varga, Jesús López-Cobos, Rico Saccani, Gerard Schwarz, and Leonard Slatkin, and appeared with the Philadelphia Orchestra, the National Symphony Orchestra, the Indianapolis Symphony Orchestra, the St. Louis Symphony Orchestra, the Royal Chamber Orchestra of Tokyo, the Budapest Philharmonic Orchestra, and the Brandenburgisches Staatorchester Frankfurt (Oder).

Ingolfsson joins a diverse roster of faculty artists charged with implementation of the Conservatory's new Breakthrough Curriculum in Music Leadership, a model at the forefront of arts training in the United States. The Breakthrough Curriculum is designed to help students develop skills in performance excellence, career development, and citizen artistry to meet the demands of today's ever-changing musical landscape. This includes a reimagined instrumental ensembles program in which students move through a rotation of varied ensemble experiences to ensure musical flexibility and training across a range of performing contexts, musical styles, and ensemble configurations.

Faculty artist Du Yun, Composition, was a co-curator of and participant in the annual Spring Revolution festival in early March at National Sawdust in Williamsburg, New York. Seeking to question and challenge the public's ideas about what it means to be Asian and a woman, she programmed the festival with a focus on new works from Asian composers and a strong presence of female composers and musicians. Every night of this festival featured a female artist or curator.

Mónica López-González, an adjunct faculty member in Musicology, participated as a Salzburg Global Fellow of the Salzburg Global Seminar during Session 593: "The Shock of the New: Arts, Technology, and Making Sense of the Future." As part of the seminar, she also was invited to write an op-ed, "A Scientist-Artist's Address to Today's Future."

Joseph Montcalmo, director of academic technology and instructional design, co-authored an article titled "Constructing 'Authentic' Science: Results from a University/High School Collaboration Integrating Digital Storytelling and Social Networking," which was recently published in the journal Research in Science Education. Also, Montcalmo was interviewed for an article titled "Innovative Online Education Improves Classroom Education," appearing in the issue "Expanding Educational Opportunity" of Mighty Guides. Last spring, he was a featured panelist for the Future of Learning Panel: "Next Generation Multi-literacy Centers Complete the Picture of 21st Century Learning Commons" at the Next Generation Learning Spaces conference in San Diego.

Liberal arts faculty member Hollis Robbins published an Inside Higher Ed story titled "Black Panther, History and the Future." In it, she writes about the implications of considering the film only in historical ways and advocates for a more forward-looking analysis.