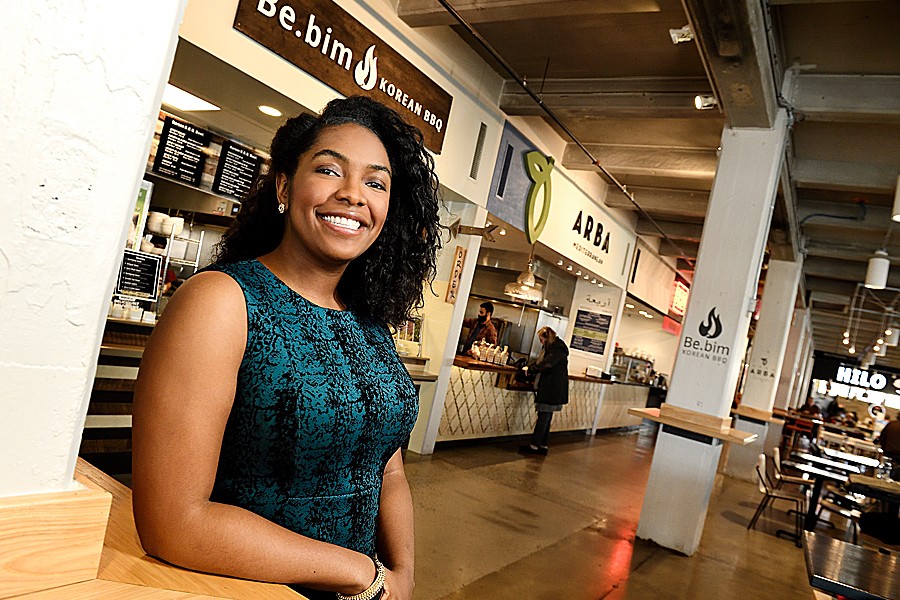 Image caption: Kylie Patterson at R. House, a food hall near the Homewood campus whose vendors are all local businesses. Among them is Be.bim, a participant in the Goldman Sachs 10,000 Small Businesses Program.

When Kylie Patterson arrived in Baltimore in August 2017 to head the HopkinsLocal initiative—which aims to leverage Johns Hopkins' economic power to build, hire, and buy locally—she was already well-acquainted with Baltimore's challenges of economic inequality and disinvestment.

As senior program manager for the Washington, D.C.-based Racial Wealth Divide Initiative at Prosperity Now, San Diego native Patterson had worked on wealth equality efforts tied to Baltimore, giving her insight into the city's history and the challenges it faces.

When the Hopkins job—her official title is senior adviser for local economic inclusion—opened up, "I was excited not only to get to impact a city I had grown to love but also to work within an institution that has its own economic power and is able to get others to commit to similar investments," she says. That's especially important given what Patterson sees as the urgency of the need for change and the extent of the efforts required. "I think we're coming to a point now as a society where we understand our challenges, and we have to take the opportunity today to address them," she explains. "That's what I'm most excited about."

To that end, she and accountable leaders from the university and health system continue the efforts of HopkinsLocal, which was launched in 2015 to expand the participation of local, minority-owned, and women-owned businesses in Hopkins' construction opportunities; increase the hiring of city residents, especially those from neighborhoods in need of job opportunities; and boost economic growth, employment, and investment in Baltimore by encouraging the purchasing of goods through city-based vendors.

But as Patterson points out, those efforts go deeper than just giving jobs or business to locals. In hiring locally, for example, "really what we're trying to do is support Baltimoreans in not only finding employment but in building wealth so they can choose their own futures," she says. Similarly, when it comes to spending money—whether it's Hopkins' or an individual's—Patterson would love to see more people make a habit of thinking about purchasing locally. "I'm not saying that every time you have to choose the local option, but think about it," she says.

Patterson says she expects each of the components of HopkinsLocal to continue to grow in the coming years. Currently the program's goal is to have 40 percent of new hires for certain entry-level positions coming from neighborhoods with high poverty and unemployment. But given that HireLocal actually exceeded its goal in FY2016 by reaching 43 percent—and that soon-to-be released numbers for FY2017 are looking good, too—"there may be some opportunity to do more in [coming years]," Patterson says. She also hopes to further support efforts to help employees advance their careers beyond entry-level positions and take full advantage of Hopkins' existing employee benefits and career-coaching services.

Goals for BuyLocal will also increase, from $10 million above baseline in FY2017 to $15 million in FY2018. And in BuildLocal, targets for minority, women, or disadvantaged business enterprises' participation increase by 1 percent each year above the original FY16 goal of 16 percent. Additionally, though the program always focused on inclusion, "we have since added an additional data point, and that is local," Patterson says.

In addition to her stewardship of HopkinsLocal, Patterson has a role in other efforts to boost local employment and business opportunities.

One is BLocal, an initiative sparked by Johns Hopkins' board of trustees leadership in an effort to engage established Baltimore businesses in outreach similar to Hopkins'. BLocal's 27 business partners all have committed to local purchasing, construction, hiring, and direct investment (which is primarily through philanthropic) efforts, Patterson says. The results so far: Though the initial three-year goal was to invest $69 million, the BLocal partners' combined efforts resulted in a whopping $86 million in its first year alone. Additionally, the partners exceeded their three-year goal of hiring 162 local employees, collectively hiring 470.

With these three complementary initiatives, Patterson sees great potential to effect real, lasting change and improve her new hometown's prospects for the future. "This city has everything it needs to be excellent and to be economically viable," she says. "And also to be a place where people want to be." 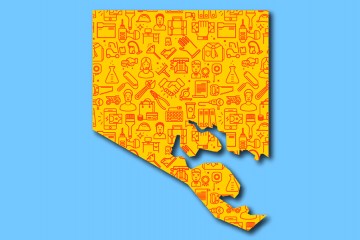 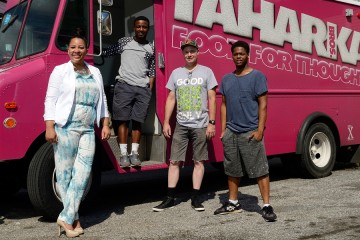 Published Aug 24, 2016
When it comes to purchasing goods and services, Crystal Burns advocates a close-to-home approach