Sherita Hill Golden named to board of American Diabetes Association

Sherita Hill Golden, the Hugh P. McCormick Family Professor of Endocrinology and Metabolism and executive vice chair of the Department of Medicine, has been named a 2018 member of the board of the American Diabetes Association. 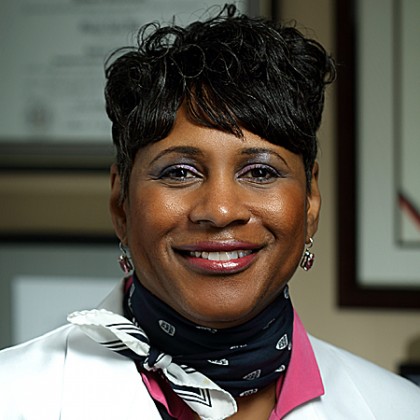 Golden was a member of the ADA Scientific Sessions Planning Committee and chair of the Epidemiology and Biostatistics Interest Group from 2011 to 2013, and she has also been active with the Behavioral Medicine and Psychology Interest Group. From 2011 to 2015, she served as associate editor for the ADA's peer-reviewed scientific journal, Diabetes Care. She recently was appointed to the ADA's Research Policy Committee.

John N. Aucott, an assistant professor in the Division of Rheumatology and director of the Johns Hopkins Lyme Disease Clinical Research Center, has been named a member of the U.S. Department of Health and Human Services' new Tick-Borne Disease Working Group. The group was established by the 21st Century Cures Act to improve federal coordination of efforts related to tickborne diseases. The 14 members of the group will review all HHS efforts related to tickborne diseases to provide expertise and help ensure interagency coordination and minimize overlap, examine research priorities, and identify unmet needs.

Joseph A. Carrese, a professor in the Department of Medicine and a core faculty member of the Johns Hopkins Berman Institute of Bioethics, has been elected a fellow of the Hastings Center, a long-standing bioethics research institute. The center, which addresses fundamental ethical and social issues in health care, science, and technology, chooses for election each year individuals whose body of work has informed scholarship and/or a public understanding of complex ethical issues. Over the course of Carrese's career, his work has focused on bioethics and cultural diversity, as well as clinical ethics and professionalism education. He joins a community of 200 Hastings Center fellows who are committed to examining and teaching about the ethical issues challenging society.

Graham Diering, a postdoctoral student in the Department of Neuroscience, was a finalist for the 2017 Eppendorf and Science Prize for Neurobiology. This international prize, established in 2002, encourages the work of promising young neurobiologists by providing support in the early stages of their careers. It is awarded annually for the most outstanding neurobiological research by a young scientist, as described in a 1,000-word essay based on research performed during the past three years. Diering's essay, "Sleep on it," was based on research in which he characterized changes in synapse composition that occur during sleep and was published on Science online. The winner and finalists were recognized at the prize ceremony held Nov. 12 in Washington, D.C., in conjunction with the Annual Meeting of the Society of Science.

Elliot K. Fishman, a professor of radiology and radiological science, won a record-breaking three awards in separate categories from AuntMinnie.com, a comprehensive community Internet site for radiologists and related professionals in the medical-imaging industry. Fishman's three 2017 awards-for Best Radiology Educator, Best Radiology Mobile App, and Best Radiology Image-were the most won by an individual in a single year in Aunt Minnie's 18-year history of giving out the awards, called the Minnies. Nominations for the 15 categories in the 2017 awards were submitted by members of AuntMinnie.com.

David Herzfeld, a research fellow in biomedical engineering, has received the Donald B. Lindsley Prize in Behavioral Neuroscience from the Society for Neuroscience. The $2,500 prize, which is given annually in recognition of an outstanding doctoral thesis in behavioral neuroscience, was presented at Neuroscience 2017, the society's annual meeting. The society's president, Eric Nestler, cited the novel methodology by which Herzfield has approached problems in motor function and his significant contributions to the understanding of motor learning and control. Using mathematical formulations, Herzfeld has shown how the brain systematically controls the way it learns from error.

Felicia Hill-Briggs, a professor of medicine, has been named the American Diabetes Association's president for health care and education. Read more.

Michelle Horner, an assistant professor of child and adolescent psychiatry, is one of 10 award recipients of the first year of the Epic Faculty Scholars Program sponsored by the Office of Faculty of the Johns Hopkins University School of Medicine. The awardees are faculty members who are predominantly clinicians and who proposed research projects based on electronic medical record sources of data. Each principal investigator leads a team of at least two other faculty collaborators in their submission. The program will provide data acquisition, storage, and analysis services as well as statistical and manuscript support to the grantees.

Donna Magid, a professor of radiology and radiological science, has been named 2017 Medscape Mentor of the Year by WebMD and Medscape. The annual honor is given to a medical professional who improves the medical community by serving as both a teacher and role model for young physicians, residents, and/or medical or nursing school students. Magid's nominator described her as a mentor who has dedicated "the entirety of her academic life to those building their own." Magid is profiled as a Health Hero in the January/February 2018 issue of WebMD magazine.

Nisa Maruthur has been promoted to associate professor of medicine in the Division of General Internal Medicine. Maruthur has a national reputation as an expert on the epidemiology of diabetes and cardiovascular disease, comparative effectiveness research and individualized medicine for diabetes. She also has led national efforts to implement the National Diabetes Prevention Program in communities at highest risk.

Olurotimi Mesubi, an electrophysiology fellow in the Heart and Vascular Institute, received the Melvin L. Marcus Young Investigator Award in Basic Cardiovascular Sciences at the annual American Heart Association meeting in November. The prestigious national award recognizes an outstanding young physician-scientist and encourages young investigators to continue research careers in cardiovascular or circulatory physiology. In his recent work, Mesubi found that two proteins-calmodulin kinase II and O-GlcNAc-are critical to the increased risk for atrial fibrillation for patients with diabetes mellitus.

Henry Michtalik, an assistant professor in the Division of General Internal Medicine, has been inducted as a senior fellow in hospital medicine by the Society of Hospital Medicine. Those so honored have demonstrated a commitment to hospital medicine, system change, and quality-improvement principles.

Peter Pronovost, senior vice president of Patient Safety and Quality and professor of anesthesiology and critical care medicine, has received the David E. Rogers Award from the Association of American Medical Colleges. The award is granted annually to a member of a medical school faculty who has made major contributions to improving the health and health care of Americans. Pronovost was among those honored during the AAMC's annual meeting in November.

Andrew Satin, director of the Department of Gynecology and Obstetrics, has been elected president of the American Board of Obstetrics and Gynecology. His four-year term begins in June.

Elise Weerts, a professor of behavioral biology in the Department of Psychiatry and Behavioral Sciences, is the new president-elect of the College on Problems of Drug Dependence, the oldest and largest organization in America devoted to advancing a scientific approach to substance use and addictive disorders.

Stephen Wegener, a professor of physical medicine and rehabilitation, has been awarded the Donlin M. Long Award by the Blaustein Pain Research Fund. The award honors those who have served the Johns Hopkins community by advancing the standards of pain care and embodied the institution's dedication to alleviating suffering and pain associated with illness. Wegener's extensive research and practice focus on improving patients' function and quality of life and reducing disability following injury or illness, such as burns, amputation, and back pain.

Antonio Wolff, a professor of oncology and a Komen Scholar, has received a Susan G. Komen research grant of $200,000 to run a pilot clinical trial aimed at improving communications between breast cancer patients, caregivers, and doctors in an outpatient setting. The main goal of the trial is to determine whether improving this communication leads to better management of the patient's care and improves the patient's quality of life.

Jessica Yeh, an associate professor of medicine and core faculty member at the Welch Center for Prevention, Epidemiology, and Clinical Research, has been selected to join the American Diabetes Association's National Health Disparities Committee, which serves as an advisory and steering committee for the association's work on reducing inequities facing populations disparately affected by diabetes. The committee provides expert guidance in the areas of effective community support, program criteria and evaluation, and trends in health-equity strategies. Yeh's appointment is for two years.