Sean Jones, an internationally acclaimed trumpeter, bandleader, composer, and educator, has been appointed the Richard and Elizabeth Case Chair in Jazz Studies at the Peabody Conservatory of the Johns Hopkins University. Jones will officially assume his duties as chair with the beginning of the 2018–19 academic year, and will make several introductory visits to Peabody during the spring 2018 semester to hear auditions, conduct master classes, and work with student jazz ensembles. His appointment is the result of a monthslong search that produced an outstanding field of diverse and competitive candidates from throughout the world. 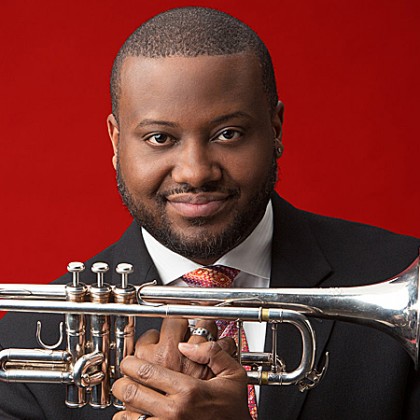 Jones comes to Peabody from the Berklee College of Music, where he has served as chair of the Brass Department since 2014. He is artistic director of the Pittsburgh Jazz Orchestra, artist-in-residence at San Francisco Performances, and a member of the SFJAZZ Collective. In addition, Jones serves as a member of the Jazz Education Network's board of directors and was recently appointed artistic director of Carnegie Hall's NYO Jazz, which makes its Carnegie Hall debut and inaugural European tour in the summer of 2018.

"Jazz is a deep and important aspect of the Baltimore story, and an essential contemporary American art form," says Fred Bronstein, dean of the Peabody Institute. "Peabody's strong commitment to jazz and its critical points of intersection with many different aspects of musical creation and performance, along with our focus on citizen artistry, make this an ideal time and place to mark a new chapter for jazz at Peabody and in Baltimore. Sean Jones—an inspiring artist, engaging leader, and dedicated teacher—is the perfect choice to lead this effort for our jazz students and all our Conservatory musicians, as well as in the broader community. We are thrilled to welcome him to Peabody and eagerly anticipate his leadership."

Jones joins a diverse roster of artist-faculty colleagues charged with implementation of the Conservatory's new Breakthrough Curriculum in Music Leadership, a model at the forefront of arts training in the United States. The Breakthrough Curriculum is designed to help students develop skills in performance, career development, and citizen artistry to meet the demands of today's ever-changing musical landscape. This includes a reimagined instrumental ensembles program in which students move through a rotation of varied ensemble experiences to ensure musical flexibility and training across a range of performing contexts, musical styles, and ensemble configurations.

"Peabody is at a crucial point in its history as a beacon of music education and curator of American music," notes Jones about his appointment. "It has the unique opportunity to support the codification and curation of America's indigenous art form not just in word but in deed. Although I will miss my wonderful colleagues at the Berklee College of Music, I am thrilled to be afforded the opportunity to help lead this storied institution into the future of American music education."

A highly respected and in-demand musician, Jones has performed and/or recorded with major figures, including Joe Lovano, Chico O'Farrill, Illinois Jacquet, Jimmy Heath, Frank Foster, Nancy Wilson, Dianne Reeves, Gerald Wilson, and, in the 2011 Tribute to Miles Tour, Marcus Miller, Herbie Hancock, and Wayne Shorter. He holds a master's degree from Rutgers University and was lead trumpeter with the Lincoln Center Jazz Orchestra, where until 2010 he worked closely with Wynton Marsalis. He has recently released his eighth recording, Live from Jazz at the Bistro, on Mack Avenue Records. In addition to Berklee, Jones has taught at Duquesne University and the Oberlin Conservatory of Music, while regularly offering master classes and clinics around the world.

Faculty artist Tony Arnold, soprano, was joined by pianist Gábor Csalog for a rare performance of György Kurtág's cantata for soprano and piano, The Sayings of Péter Bornemisza, op. 7, on Dec. 19, when the Zeneakadémia in Budapest commemorated the 500th anniversary of the Reformation with a concert featuring this notoriously difficult song cycle in the composer's native Hungary.