KT Ramesh, the Alonzo G. Decker Jr. Professor of Science and Engineering, director of the Hopkins Extreme Materials Institute, and a professor in the Department of Mechanical Engineering, has been named by the American Academy of Mechanics as its 2017 fellow. 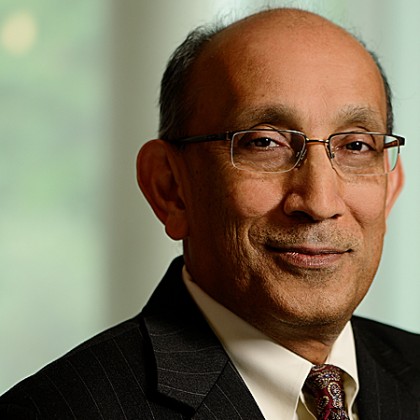 The honor society, which selects a single new fellow each year, is home to all disciplines engaged in the study of the response of inanimate and animate matter to forces and environmental effects. New AAM fellows are elected by current fellows from among the organization's members in good standing on the basis of their significant contributions to the field of mechanics.

Ramesh was recognized for his research into the impact and failure of materials under extreme conditions. His current investigations focus on protection materials, the massive failure of brittle solids, impact processes in planetary science, and impact biomechanics.

David Gracias, a professor in the Department of Chemical and Biomolecular Engineering, has received a Friedrich Wilhelm Bessel Research Award from the Alexander von Humboldt Foundation in Germany. Award winners are invited to conduct a research project of their own choice in Germany in close collaboration with fellow experts at a research institution in Germany. Award winners—who must be from abroad and internationally renowned in their fields, and who completed their doctorates less than 18 years ago—are honored for their outstanding record and the expectation that they will continue to produce cutting-edge research. The Humboldt Foundation gives about 20 Bessel research awards annually, each valued at about $53,000.

Gregory Hager, the Mandell Bellmore Professor of Computer Science and director of the Malone Center for Engineering in Healthcare, has been named a 2017 fellow of the Association for Computing Machinery. This honor recognizes those who have made transformative contributions to, and are advancing technology in, areas ranging from artificial intelligence and bioinformatics to cloud computing and software engineering. Hager was recognized for contributions to vision-based robotics and to computer-enhanced interventional medicine. He is one of 54 new fellows, who come from universities, companies, and research centers in Canada, China, Denmark, Germany, Hong Kong, Switzerland, the United Kingdom, and the United States. He will be formally recognized at ACM's annual Awards Banquet, to be held in San Francisco in June.

Howard Katz and Russell Taylor have been elected fellows of the National Academy of Inventors and will be formally inducted at NAI's seventh annual conference, to be held in April in Washington, D.C. They bring to 11 the number of Johns Hopkins faculty members who have been recognized in this way.

Katz, a professor in, and former chair of, the Department of Materials Science and Engineering and a member of the Institute for NanoBioTechnology, holds a secondary appointment in the Department of Chemistry in the Krieger School of Arts and Sciences. In 2008, he was named an inaugural fellow of the Materials Research Society. Katz's body of work comprises research in areas ranging from organic semiconductors and organic electronics for chemical sensing to thermoelectric polymer blends; applications include organic and printed electronics and health care.

Taylor is the John C. Malone Professor in the Department of Computer Science, director of the Laboratory for Computational Sensing and Robotics, and a member of the Johns Hopkins Malone Center for Engineering in Healthcare, and he is widely considered the father of medical robotics. He began working in robotics research more than 40 years ago and became focused on medical robotics about 25 years ago, when the field was virtually nonexistent. His election as an NAI fellow recognizes his ongoing role as a global leader in efforts to enhance medical treatment through the expanded use of robotic devices and computer-integrated tools. In 2015, Taylor became the 36th recipient of the Honda Prize.