Retiring director of the Osher Institute leaves a legacy of learning

Mary Kay Shartle Galotto came out of her own retirement to lead Osher, and to provide others with a place to learn

Mary Kay Shartle Galotto, who has led the Osher Lifelong Learning Institute at Johns Hopkins for retirees since 2011, is stepping into retirement herself. And it's not the first time: She retired from Montgomery College in 2009.

"I really wasn't finished when I retired the first time," Shartle Galotto says. "Osher gave me the opportunity to use all those skills I had before in a totally new environment." 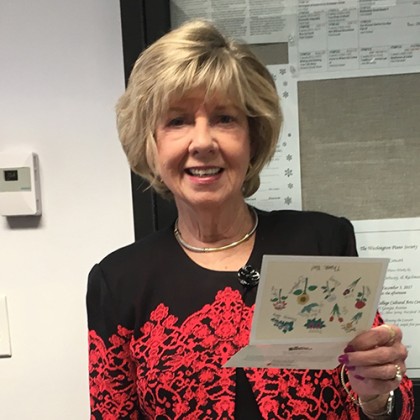 This time, though, she says she is really retiring.

"She's been a guiding light to me, a mentor," says Susan Howard, the current program supervisor, who will become the director when Shartle Galotto steps down Jan. 15.

Shartle Galotto began her career as a secondary English and special education teacher in Maryland public schools. She eventually went on to Montgomery College, where she worked in various positions until she retired in 2009 as executive vice president for academic and student services. She received accolades along the way, including being named one of Maryland's Top 100 Women by the Maryland Daily Record.

During her two-year retirement, Shartle Galotto taught online classes for University of Maryland University College and oversaw graduate students working on their dissertations. She also was able to help out her daughter, who had a baby.

"It was a good two years to be out," Shartle Galotto says. "But it wasn't really enough to keep me busy."

She heard about the Osher director position from Dianne Scheper. She and Scheper had worked together at Montgomery College, and Scheper had gone on to work at Johns Hopkins as a senior lecturer and program coordinator for the Master of Liberal Arts program in the Krieger School's Advanced Academic Programs. Osher is also part of Advanced Academic Programs, and the position was a good fit for Shartle Galotto, who became director in 2011.

Osher is a noncredit academic program for retired and semiretired adults. Courses include literature, opera, science, history, politics, and religion, among others. Of the nearly 1,300 senior citizens who are Osher at JHU members, nearly 1,000 take classes in Montgomery County.

When Shartle Galotto started at Hopkins, though, approximately 800 seniors were members, with another 500 on a waiting list. "The reason was there was nowhere to put them."

One of her significant achievements, she says, was finding additional places to hold Osher courses. Now, along with the university's Montgomery County and Columbia campuses and Grace United Methodist Church in Baltimore, courses are held at Asbury Methodist Village and Ingleside at King Farm, two retirement communities in Montgomery County. "It worked well," she says, quick to add that identifying new locations was a team effort with her colleagues.

With enrollment hitting the 1,000 mark, Osher at JHU was eligible to apply for grants from the Bernard Osher Foundation. It was successful, receiving several $50,000 bridge grants and two $1 million grants. Shartle Galotto says she is proud she was able to take "a great program and move it forward. It wasn't just me. It was the staff."

Today, Osher offers more courses at more locations, and does more special events, such as day and overnight trips, cruises, and themed luncheons.

Shartle Galotto recognizes how much Osher means to its members.

"People love this program," she says. "People come up to me and say, 'Osher saved my life.' When people are professionals and career-oriented, to just suddenly stop isn't a lot of fun."

In her second retirement, Shartle Galotto plans to travel with her husband and enjoy their condo in Naples, Florida. She has Italy, Russia, and Switzerland in mind as travel destinations, and she loves cruises. "We're both at this point healthy, and I want to take advantage of it," she says. She also looks forward to spending more time with her four grandchildren.

She says she has enjoyed working with Osher members, whom she describes as bright, interested, and loving learning. "Members had a fit when there was a snow day, rather than cheering," she says. "I'll miss it."

"In a way, we were a Hopkins family, and it was always parts of our lives," she says. "It was fun to work here and be a part of it."