Nancy Glass, a professor in the Department of Community-Public Health and associate director of the Johns Hopkins Center for Global Health, has been named to the Independence Foundation Chair in Nursing Education. 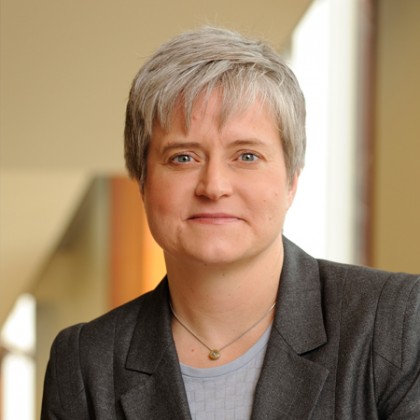 Given in 1989 by the Independence Foundation of Philadelphia, the endowment was intended for an academic chair that could help nursing programs engage in long-term planning and support programs for education.

At JHSON, Glass has helped further excellence in education by serving as director of the MSN/MPH Public Health Nursing program and coordinator of the Coverdell Peace Corps Fellows program. She has a joint appointment in the Johns Hopkins Bloomberg School of Public Health.

Cheryl Dennison Himmelfarb, a professor in the Department of Acute and Chronic Care and associate dean for research, is a co-author of the newly released 2017 Hypertension Clinical Guidelines, a comprehensive resource for the clinical and public health practice communities.

Martha Hill, dean emerita, received the 2017 Emeritus Membership Award of the American Association of Colleges of Nursing. The honor is given to those who continue to further nursing education or health care after their deanship.

Sandy Swoboda, a senior research nurse associated with the schools of Medicine and Nursing, was selected as a recipient of the 2018 Star Research Achievement Award by the Society of Critical Care Medicine.

At the sixth annual An Evening with the Stars—which celebrates the excellence, innovation, and community impact of Hopkins Nursing—the following people were honored. Deborah Gross, the Leonard and Helen Stulman Endowed Professor in the Department of Acute and Chronic Care, was named Faculty Shining Star; Lou Bartolo, a student in the Entry into Nursing Practice Program, was named Student Shining Star; Raphe Reggie, a multimedia services supervisor, received the Staff Excellence Award; and Deborah Baker, a clinical instructor, received the Heritage Award.