Zaver Bhujwalla, a professor of radiology and radiological science, has received an NCI Outstanding Investigator Award R35 Grant from the National Cancer Institute. 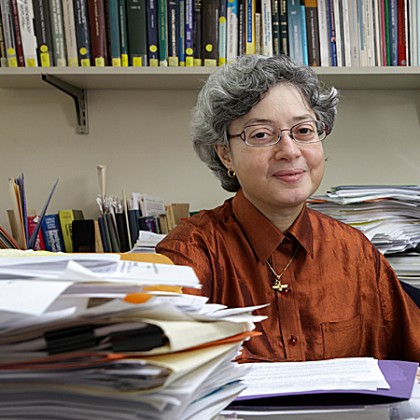 The grant supports investigators with outstanding records of productivity in cancer research by providing extended funding stability and encouraging recipients to continue or embark on projects of unusual potential in cancer research. It provides up to $600,000 in direct costs per year for seven years, allowing substantial time for funded investigators to take greater risks and be more adventurous in their research.

Bhujwalla's grant will aid her as she works to expand the understanding of cancer through the applications of molecular and functional imaging.

John Cameron, a professor of surgery, has been given a 2017 Giants of Cancer Care award by OncLive, an oncology information network and community. This national award celebrates the exceptional achievements of leading researchers and educators in oncology research and clinical practice. Cameron was presented with two commemorative plaques: one in recognition of his place among the top pancreatic surgeons in the world, the other in recognition of the integral role Johns Hopkins Medicine plays in the treatment of complex hepatopancreatobiliary surgical cases.

James C. Harris, founding director of the Developmental Neuropsychiatry Program at Johns Hopkins and the Kennedy Krieger Institute, and professor of psychiatry and behavioral sciences and of pediatrics, received the Catcher in the Rye Advocacy Award from the American Academy of Child and Adolescent Psychiatry. The award honors Harris for being a "steadfast advocate" who has "worked tirelessly on behalf of children, adolescents, and their families."

Argye Hillis, a professor of neurology and director of Cerebrovascular Neurology, was awarded the ninth annual Vice Dean's Award from the Office of Women in Science and Medicine for commitment to recruiting, mentoring, and advancing women faculty at the school.

Karen M. Horton, a professor in the Russell H. Morgan Department of Radiology and Radiological Science, has been named director of the department. She had been interim director and also chairman of the board of Johns Hopkins Medical Imaging since February 2016. Horton joined the radiology faculty as an assistant professor in 1998 and was promoted to professor in 2008. She is a leading authority in the radiology community on body CT imaging, 3-D post-processing of CT data, and virtual colonoscopy.

Lauren M. Jansson, an associate professor of pediatrics, has been awarded $3 million over a five-year period for research titled "Maternal buprenorphine-naloxone treatment in the perinatal period: Fetal and infant effects." The award comes from the National Institutes of Health and the National Institute on Drug Abuse. The goal of the study is to explore the effects of buprenorphine-naloxone, a medication used to treat opioid dependency, by evaluating maternal and fetal physiology in the second half of pregnancy.

David Newman-Toker, a professor of neurology, ophthalmology, and otolaryngology and director of the Armstrong Institute Center for Diagnostic Excellence at Johns Hopkins Medicine, has been named president-elect of the Society to Improve Diagnosis in Medicine. He will serve a one-year term as president beginning in November 2018.

Ben Ho Park, a professor of oncology, has received a Susan G. Komen research grant of $600,000 to design a treatment strategy to target abnormal proteins that are found only in cancer cells and result from a mutation in a gene called SF3B1. The goal of this research is to help develop new therapies for breast cancer patients with this gene mutation.

Michael Paulaitis, a professor of ophthalmology at the Wilmer Eye Institute, has received a $160,000 grant for his research on macular degeneration from Maryland-based nonprofit BrightFocus, a leading source of funding and support for scientific research to defeat Alzheimer's, glaucoma, and macular degeneration. The study is investigating small molecules called microRNAs to see what they can tell us about mitochondria disorders in cells of the retina, with the goal of understanding how age-related macular degeneration develops in order to provide new treatments.

Peter Pronovost, senior vice president for patient safety and quality and professor of anesthesiology and critical care medicine, has received the David E. Rogers Award from the Association of American Medical Colleges. The award is granted annually to a member of a medical school faculty who has made major contributions to improving the health and health care of Americans. Pronovost was among those honored during the AAMC's annual meeting on Nov. 5.

Michelle Rudek, an associate professor of oncology at the Johns Hopkins Kimmel Cancer Center, is the 2017 recipient of the Michaele Christian Oncology Development Award and Lectureship given by the Cancer Therapy Evaluation Program. The award was established by the program in 2007 to honor Christian's 20-year-career at the National Cancer Institute. Rudek has been a leader in oncology clinical translational research, with a focus on clinical pharmacology in early-phase trials and special populations in oncology. She also has been committed to mentoring and encouraging young translational investigators throughout her career.

Leticia Manning Ryan, director of research in the Division of Pediatric Emergency Medicine and an assistant professor in the Department of Pediatrics, has been selected to join Interdisciplinary Research Leaders, a leadership development program led by the University of Minnesota with support from the Robert Wood Johnson Foundation. She will be a member of one of 15 three-person teams chosen to participate in this national program. Ryan and the other members of this diverse group of researchers and community leaders—including directors of nonprofits, psychologists, and community organizers—are charged with collaborating and innovating to solve persistent health challenges facing communities.

Heather Sateia, an assistant professor of medicine, has been chosen as the associate program director in the Osler Medical Training Program. She will focus on equity, diversity, and culture, with the goal of enhancing the resident experience. Sateia is a full-time member of the Division of General Internal Medicine with clinical expertise in internal medicine, preventive medicine, and primary care.

Paul Sponseller, a professor of orthopedic surgery and chief of the Division of Pediatric Orthopaedics, has been named vice president of the Scoliosis Research Society, an international organization with a world-renowned leadership and a commitment to research and education in the field of spinal deformities.

Pranita Tamma, an assistant professor of pediatrics, has received the 2017 Pediatric Scholarship Award from the Society of Healthcare Epidemiology of America for her contributions to the study of antimicrobial resistance and for her antimicrobial stewardship, under the mentorship of Sara Cosgrove, associate professor of medicine and epidemiology and director of the Antimicrobial Stewardship Program. Tamma's research focuses on the diagnosis and treatment of multidrug-resistant gram-negative infections in children and adults.

Joshua Y. Yang, an MD student and also a PhD candidate in the Department of Bioengineering, was the first-place winner of a 2017 IDT Synthetic Biology Grant Program award given by Integrated DNA Technologies. The program seeks to empower the next generation of world-changing companies by providing vital reagents to early-stage companies working in the fields of human health and sustainable manufacturing or on humanitarian causes. Yang received the grant through his diagnostics assay company, Helispot, which was spun out of technology at Johns Hopkins. He plans to use the grant to develop novel functions in helicase enzymes to enable low-cost diagnostics in point-of-care and low-resource settings.

Feng-Quan Zhou, an associate professor of orthopedic surgery and neuroscience, has received a $150,000 grant for his research on glaucoma from Maryland-based nonprofit BrightFocus, a leading source of funding and support for scientific research to defeat Alzheimer's, glaucoma, and macular degeneration. Zhou's study aims to investigate two novel approaches for promoting long-distance (i.e., eye to brain) optic nerve regeneration.