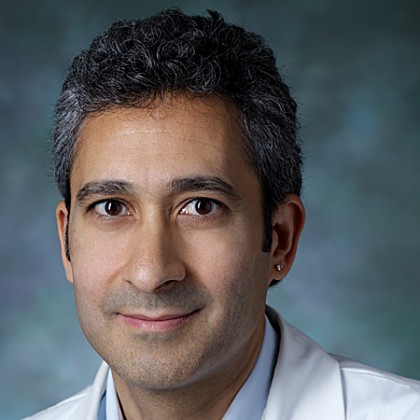 Martin Brodsky, an associate professor of physical medicine and rehabilitation, has been elected a fellow of the American Speech-Language-Hearing Association. The award is one of ASHA's highest forms of recognition of an individual's professional achievements.

Theodore DeWeese, a professor and director of the Department of Radiation Oncology and Molecular Radiation Sciences, and a professor of urology, has become president-elect of the 10,000-member American Society for Radiation Oncology, the world's premier radiation oncology society. DeWeese also serves as Johns Hopkins Medicine's vice president for interdisciplinary patient care.

Eloiza Domingo-Snyder, director of diversity, inclusion, and cultural competency for Johns Hopkins Medicine and the Johns Hopkins Health System, has been named to the 2017 VIP list—Very Important Professionals by 40—compiled by The Daily Record, Baltimore's legal and business newspaper. She also has received a Women Worth Watching award from the Profiles in Diversity Journal.

Marlis González-Fernández, an associate professor and medical director of the outpatient physical medicine and rehabilitation clinics, has been named vice chair for clinical operations in the Department of Physical Medicine and Rehabilitation.

Krishnaj Gourab, an assistant professor of physical medicine and rehabilitation, has been appointed director of the Department of Physical Medicine and Rehabilitation at Johns Hopkins Bayview. He joined the department in 2013 and has served as its interim director since September 2016. His contributions have played a crucial role in growing the PM&R program.

Mahadevappa Mahesh, an associate professor of radiology and cardiology and chief physicist at Johns Hopkins Hospital, has been elected to the United States National Council on Radiation Protection and Measurements. Chartered by the federal government, the 100-member NCRP seeks to formulate and widely disseminate information, guidance, and recommendations on radiation protection and measurements.

Erica Shelton, an assistant professor of emergency medicine, has been appointed by Gov. Larry Hogan to a four-year term on the Maryland Community Health Resources Commission. She will provide guidance to the state about resource allocation for community-based health programs.

Seamus Whelton, an internal medicine fellow in the Division of Cardiology, has received the 2017 PJ Schafer Cardiovascular Research Fund Award. Named in memory of Paul "PJ" Schafer III, who died of premature heart disease while playing college lacrosse in 2003, the $20,000 award will fund Whelton's research into the prevention of heart disease and sudden cardiac death.

John Wong, a professor of radiation oncology and molecular radiology and head of the Division of Medical Physics, has received the American Association of Physicists in Medicine's 2017 Edith Quimby Lifetime Achievement Award. Wong developed the technology that gives radiation oncologists the ability to create CT images at the same time the patient receives radiation, transforming how radiation therapy is delivered to patients in clinics around the world.

Jonathan Zenilman, a professor of medicine, dermatology, and obstetrics and gynecology, and chief of the Division of Infectious Diseases, has been named director of the Armstrong Institute for Patient Safety and Quality at its new location, Hopkins Bayview. The institute's expansion will support and strengthen its mission to eliminate preventable harm, improve patient outcomes and experiences, and reduce waste in health care.