Ron Luman, chief of staff at APL, has been selected as an INCOSE Fellow by the International Council on Systems Engineering. Luman and three others formally accepted the honor at the 27th annual INCOSE International Symposium, held in July in Adelaide, Australia.

INCOSE Fellows are individuals with significant, verifiable contributions to the art and practice of systems engineering in industry, government, or academia. 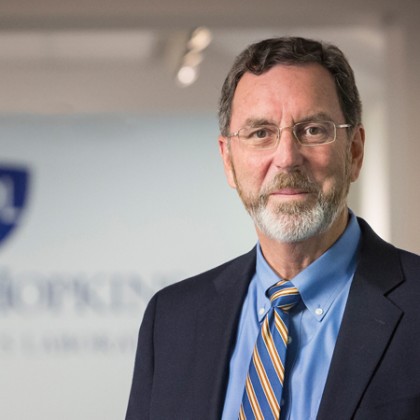 Luman was cited for "significant contributions to [the] advancement of systems thinking in fields ranging from homeland security to major military development programs, providing guidance to the U.S. government, the military services, the intelligence community, and academia."

Luman arrived at APL in 1978 as an associate staff mathematician, conducting modeling and analysis of submarine navigation systems in what is now the Strategic Deterrence Mission Area. Prior to being named chief of staff in 2013, he served in a variety of leadership positions at APL, including assistant director for strategy, and head of the National Security Analysis Department.

His focus on systems engineering has led to critical APL contributions to a variety of national security challenges facing the Navy, the Missile Defense Agency, the National Security Agency, and the National Infrastructure Advisory Council.

Luman has been an active member of INCOSE since 1994, serves on the INCOSE Corporate Advisory Board, and is a member of the Naval Studies Board, the National Research Council, and the National Academies of Sciences, Engineering, and Medicine.

"APL's systems engineering approach has been critical to our ability to provide solutions in all of our mission areas, spanning naval force projection, air and missile defense, asymmetric operations, and space exploration," Luman says. "It is an honor to be recognized by an organization that champions the art, science, discipline, and practice of systems engineering."

Luman is the second INCOSE Fellow from APL after former Director Alexander Kossiakoff (2004), and he also follows his dissertation adviser from the George Washington University, Howard Eisner (2006). With the inclusion of this year's cohort, 90 individuals have been selected as INCOSE Fellows.

Emelia Probasco has been named chief communications officer. In that role, she leads organizationwide communication efforts to support and drive APL's strategic vision. She also oversees the Lab's Office of Communications and Public Affairs.