Nitish Thakor, a professor in the Johns Hopkins Department of Biomedical Engineering, has received the 2017 IEEE Engineering in Medicine and Biology Society's Academic Career Achievement Award. 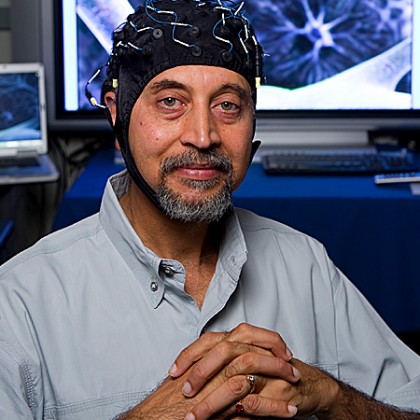 The honor is given annually to an individual with a distinguished career of 20 years or more for outstanding contributions and achievements in the field of biomedical engineering as an educator, researcher, developer, or administrator.

Thakor is being recognized for "lifelong achievements in the fields of biomedical instrumentation and signal processing, neuroprosthesis, and neuroengineering, demonstrated through awards, publications, translational activities, and leadership in the society's conferences and editorial activities."

He received the award during the opening ceremony of the 39th Annual International Conference of the IEEE Engineering in Medicine and Biology Society, which was held this month on Jeju Island, Korea.

Joelle Frechette, an associate professor in the Department of Chemical and Biomolecular Engineering, has been elected to the American Chemical Society's 2017 Class of Fellows. The ACS Fellows Program recognizes and honors members for outstanding achievement in, and contributions to, science, the profession, and the organization. Frechette was one of 65 members named as fellows this year. She is being recognized for her significant contributions in the measurement and manipulation of surface forces and adhesion to understand and design the behavior and properties of nanomaterials and soft matter. She will be officially inducted in August during the ACS national meeting in Washington, D.C.

Timothy P. Weihs, a professor in the Department of Materials Science and Engineering, has been elected a fellow of ASM International. Fellows are recognized for making significant contributions to the field of materials science and engineering. Weihs was selected for "fundamental understanding, development, invention, and successful commercialization of reactive metallic materials and structures and for innovation in mentoring and educating future materials engineers and entrepreneurs." He will receive the honor formally at an ASM awards dinner during the Materials Science & Technology Conference & Exhibition to be held in October in Pittsburgh.