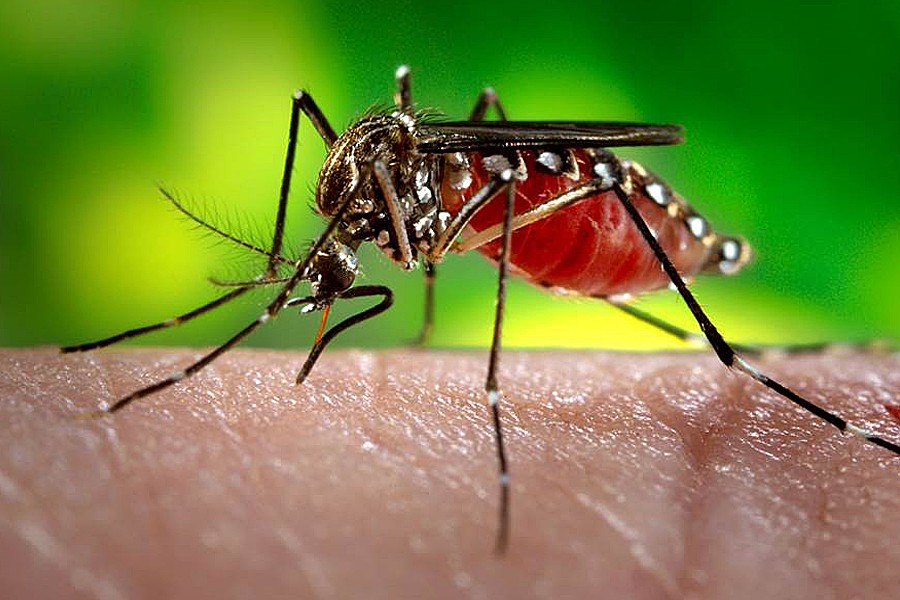 Image caption: The Aedes aegypti species of mosquito, which is found in tropical and subtropical regions, can transmit the Zika virus, yellow fever, dengue, chikungunya, and the West Nile virus. It often bites during the day.

Summer is back, and so are the mosquitoes. Several diseases can be spread through mosquito bites. If you've watched the news, you've likely heard of Zika, a mosquito-borne disease, but there are also several other mosquito-transmitted viruses, known as arboviruses, that include malaria, chikungunya, yellow fever, West Nile virus, and dengue. Depending on the virus, many people do not develop symptoms after being bitten by a mosquito carrying one of these pathogens. Others have a mild short-term illness or, in some cases, develop a serious or long-term illness that can even lead to death.

Different species of mosquitoes can carry different diseases, and they vary depending on geographic location and are active during different times of the day. For example, the Aedes aegypti species of mosquito is found in tropical and subtropical regions in the U.S. and around the world. This type of mosquito, which often bites during the day, can transmit the Zika virus, yellow fever, dengue, chikungunya, and the West Nile virus.

Here are descriptions of a few mosquito-borne illnesses:

West Nile virus: Transmission of West Nile, the most common virus transmitted by mosquitoes to humans in the United States, has been found worldwide. Most infected people have no symptoms. About one in five people who are infected will develop a fever along with other symptoms. Rarely, those infected can develop a serious, sometimes fatal, neurologic illness. No vaccine or treatment presently exists for this virus.

Zika virus: Most people who contract the Zika virus do not show symptoms. Zika has been found in countries around the world. To date in the continental U.S., Florida and Texas are the only two states where local transmission of Zika has occurred. Local transmission has also been reported in Puerto Rico. In addition to being transmitted by mosquitoes, Zika can be spread through sex with an infected person and from a pregnant mother to her unborn baby. Zika is usually a mild illness that requires no specific treatment, but it can cause serious birth defects—such as microcephaly—or other neurological conditions in both children and adults. There is no vaccine or treatment for Zika.

Chikungunya: This virus has been found worldwide, including in the U.S. states of Florida and Texas, and in the Caribbean. Most people infected with the chikungunya virus will develop some symptoms, most commonly fever and joint pain. Symptoms can be severe but rarely lead to death. There is no vaccine or medicine to treat chikungunya.

Malaria: Malaria is caused by the bite of an infected Anopheles mosquito. Symptoms are flulike, including fever and chills. If untreated, patients can develop complications and die. Most malaria cases and deaths occur in Africa, but dozens of other tropical and subtropical areas are also at risk. According to the Centers for Disease Control and Prevention, 429,000 people died of malaria in 2015. About 1,700 cases are diagnosed in the U.S. each year, almost all travel-related. While treatment exists, no effective malaria vaccine is currently on the market.

Dengue: The dengue virus is believed to be a leading cause of illness and death in tropical and subtropical locations worldwide. Although dengue rarely occurs in the continental United States, it is prevalent in Puerto Rico and other popular tourist destinations, as well as in more than 100 countries. Research estimates about 390 million dengue infections occur each year. Possible symptoms are a high fever, severe headache, eye pain, and more. There is no vaccine available against dengue, and there are no specific medications to treat this type of infection.

If you think you or a loved one may have a mosquito-borne disease or have symptoms of one of the illnesses after returning from an affected area, it's important to see a doctor right away.