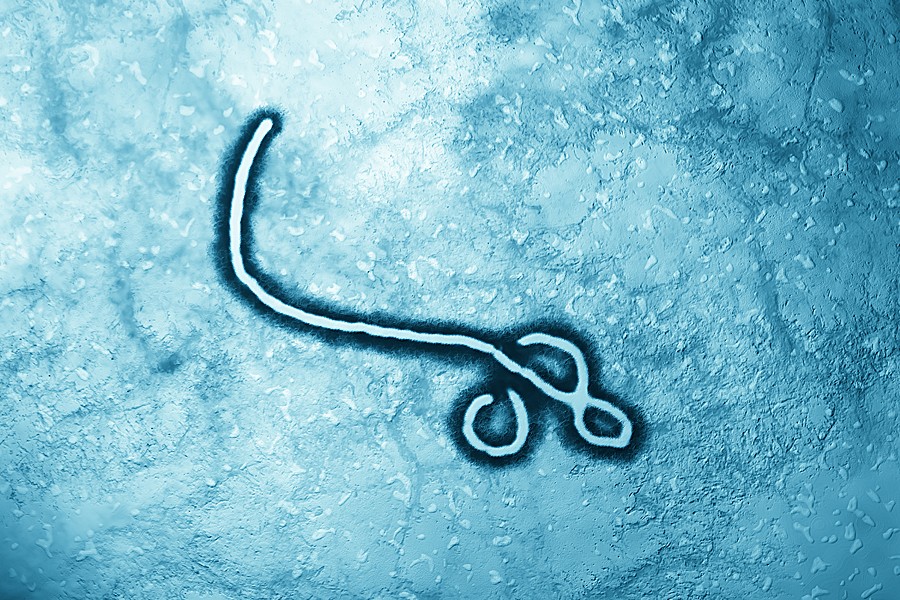 Image caption: Ebola virus can spread from person to person through direct contact with the blood, secretions, organs, or other bodily fluids of those who are infected and from contact with infected surfaces and materials, such as bedding and clothing.

The most recent outbreak of Ebola in the Democratic Republic of Congo has ended, according to the World Health Organization. In May, the WHO was notified about potential cases in the country's Bas-Uele province. According to the WHO, four people died, and four people survived the disease. Five cases were laboratory-confirmed.

Just before the outbreak, the Johns Hopkins Hospital had participated in a federal multiagency overseas exercise designed by the Department of State and the Department of Health and Human Services' Office of the Assistant Secretary for Preparedness and Response. The hospital was chosen as one of five medical centers throughout the U.S. to receive two simulated patients with Ebola from Africa as part of the exercise.

About 100 Johns Hopkins faculty and staff members took part in the drill by either planning or carrying out the exercise, including participants from the biocontainment unit, Hospital Epidemiology and Infection Control, Lifeline, and the Johns Hopkins Office of Critical Event Preparedness and Response.

The goal of the drill was to assess the readiness of federal, state, local, and private partners to respond to an outbreak overseas and to validate the federal government's sustained capability to safely evacuate and care for multiple highly infectious disease patients at once.

During the drill, a total of 11 simulated patients were flown to the U.S. from Africa on five planes equipped with special containment systems for highly infectious patients. Johns Hopkins Lifeline team members traveled at 4:30 a.m. to Washington Dulles International Airport, where they picked up two of the mock patients and transported them to Johns Hopkins Hospital.

Upon arrival at the hospital, the two drill patients were taken to the biocontainment unit, where the team practiced admitting them simultaneously, and carried out essential care protocols such as patient assessment, laboratory testing, and waste transport.

"The drill was a tremendous success," says Brian Garibaldi, medical director of the biocontainment unit. "Each time we participate in a live exercise we learn new ways to improve our current practices and protocols. We have come so far since we began conducting BCU drills a little over 18 months ago. It is such a privilege to work with talented people from across the health system who are devoted to keeping our staff, patients, hospital, and community safe and prepared for whatever infectious diseases or biologic threats may lie ahead."

The most recent Ebola outbreak followed the epidemic between 2014 and 2016 in West Africa, which the WHO called the largest and most complex Ebola outbreak since the virus was discovered in 1976.

Ebola virus disease is a serious and often deadly illness caused by an infection. Ebola can spread from person to person through direct contact with the blood, secretions, organs, or other bodily fluids of those who are infected and from contact with infected surfaces and materials, such as bedding and clothing.