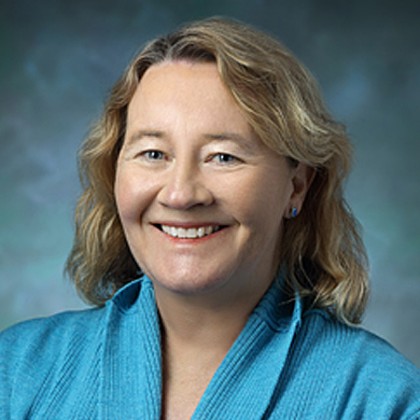 Bloomberg Distinguished Professor Carol Greider, the Daniel Nathans Professor and Director of the Department of Molecular Biology and Genetics, and a professor of molecular biology and genetics, has received an Outstanding Investigator Award from the National Cancer Institute. The award was established in 2015 for principal investigators who have achieved significant research accomplishments. It provides funding of up to $600,000 in direct costs per year for seven years, allowing the awarded investigators to continue or begin projects of unusual potential in cancer research. Greider, a Nobel laureate, directs a group of scientists studying the role of short telomeres in both age-related disease and cancer.

Kofi Boahene, an associate professor in Otolaryngology–Head and Neck Surgery, was named the 2017 winner of the Maureen Hannley Award by the American Academy of Otolaryngology–Head and Neck Surgery for his triological thesis titled "Free Functional Transfer of the Omohyoid Muscle Tendon Unit: Flap Dissection, Biomechanical Modeling, Excursion, and Potential Application in Facial Paralysis." The award is given annually to the candidate whose thesis represents an outstanding contribution in the alternative science category of Technology/Procedure Development, Otolaryngology Status and Trends, Health Services Research, or Historical Perspective.

Leonard Feldman, an associate professor of pediatrics and director of the Medicine-Pediatrics Urban Health Residency Program, has received an Educational Scholarship Award from the School of Medicine's Institute for Excellence in Education. The award is designed primarily for a faculty member who has a notable body of educational scholarship work, which can include publications, workshops, and other means of disseminating information, and contributions to other institutions.

Judith Goldstein, an associate professor of ophthalmology and rehabilitative medicine and chief of the Low Vision and Vision Rehabilitation Service at the Wilmer Eye Institute, was awarded the 2017 Humanitarian of the Year Award by the Lions Multiple District 22-C. Goldstein received the award for her landmark research in vision rehabilitation and her commitment to extending low-vision services to a population in need.

David Levine, a professor of medicine in the General Internal Medicine division, and director of the Office of Postdoctoral Fellowship Programs in the Department of Medicine, has received the highest honor given by the School of Medicine's Institute for Excellence in Education—the Martin D. Abeloff Award for Lifetime Achievement in Medical and Biomedical Education. Levine studies community-based prevention of cardiovascular disease and the behavioral aspects of prevention.

Rab Razzak, an assistant professor of medicine and director of Outpatient Palliative Medicine, has received an Educational Program Award for the Osler Wellness Program from the School of Medicine's Institute for Excellence in Education. The award recognizes a noteworthy medical or biomedical teaching program that has been implemented for no more than five years. Programs are judged on their impact on learners, including learner satisfaction, educational outcomes attained, and scholarship and recognition.

Heather Sateia, an associate professor of medicine, has received the Lisa J. Heiser Award for Junior Faculty Contribution in Education from the School of Medicine's Institute for Excellence in Education. The annual award, which accepts only peer nominations, is given to one junior faculty member—on faculty for no more than five years—who has made an outstanding contribution in medical/biomedical education and shown great promise for future meaningful contributions.

Gordon Tomaselli, a professor of medicine and chief of the Division of Cardiology, was named the next editor-in-chief of the Journal of Clinical Investigation at the American Society for Clinical Investigation/Association of American Physicians' joint meeting in Chicago in April. Tomaselli will serve a five-year term with an editorial board of peer scientists based at Johns Hopkins.