Three Johns Hopkins University faculty members will receive the Provost's Award for Excellence in Faculty Mentoring for their commitment to helping early- and mid-career faculty develop their skills.

The winners of the award are:

The award is accompanied by a $5,000 honorarium. 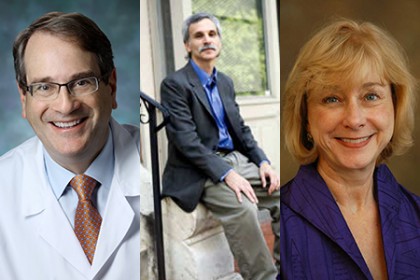 "Henry Brem, Cynthia Rand, and Carl Latkin embody in their mentoring a set of key ideas: we are stronger as a university when we work together, when scholars new to a field are helped and brought along in their work, and when we look out for each other," said Christopher Celenza, vice provost for faculty affairs. "Henry, Cynthia, and Carl consistently do well by doing good. What a pleasure it is to recognize them for their work and to see the way their examples will radiate outward to the rest of our university community."

As neurosurgeon-in-chief at the School of Medicine, Brem leads the department in the treatment of brain tumors.

"His committed leadership empowers our department's continued growth in teaching, innovative clinical and basic research efforts, and excellence in patient care," wrote Judy Huang, a professor of neurosurgery, in a letter nominating Brem for the award. "[His mentorship] transcends rank and department to include faculty members at all career stages, residents, colleagues from other disciplines, investigators, and students."

In a nominating letter, Latkin is described as mentoring more than 30 individuals at the School of Public Health.

"These mentoring experiences are not merely impressive numbers; … [they demonstrate] the profound impact that he has had on the professional growth of the new generations of scholars both in and outside of Hopkins," wrote Xiangrong Kong, an associate scientist in the departments of biostatistics and epidemiology at the Bloomberg School.

"Dr. Rand has built an extraordinary reputation for mentoring students, fellows, and faculty at Johns Hopkins and around the globe. She has touched scores of lives and careers through her patience, wisdom, and keen insight both as a mentor and ultimately as a friend," read Rand's nominating letter, written by Jonathan Orens, director of the Division of Pulmonary and Critical Care Medicine.

Selected from 27 nominations, the three winners exemplify the spirit of the award, which was established in 2015 to recognize excellence, generosity, and dedication to mentoring junior faculty.

"Our task force reviewed these nominees very carefully, because it's a difficult process—we have so many amazingly gifted faculty," said Jennifer Haythornthwaite, a professor of psychiatry and behavioral sciences and director of the Center for Mind-Body Research who led the selection committee of 11 faculty members from across the institution. "The mentors who have stood out two years in a row are those who go beyond their specialties and disciplines, and who have an impact on a number of different faculty members.

"Mentoring makes a difference in people's lives," Haythornthwaite added. "It contributes to job satisfaction and career progression. It is one of those generally thankless tasks that we really want to recognize our faculty for, and thank them." 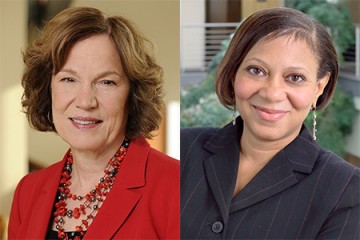