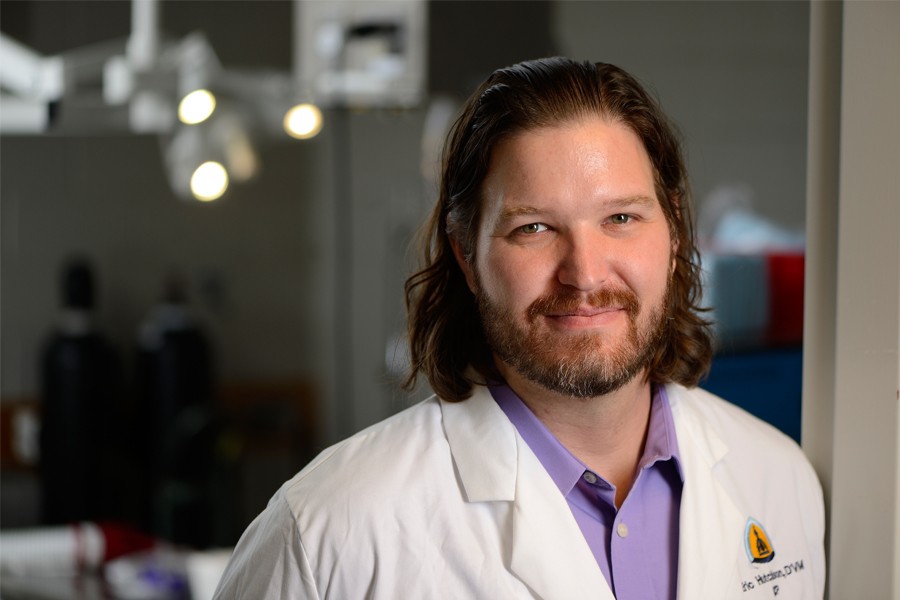 Like humans, monkeys each have their own innate temperament. For some, if you introduce a new toy into their living space, they'll react with curious delight. But for other monkeys, the more hesitant ones, a new toy could bring an afternoon of anxiety.

"It's not a one-size-fits-all proposition," says Eric Hutchinson, the new associate director of Research Animal Resources at Johns Hopkins.

It's these types of issues that Hutchinson spends his time exploring—the best ways to keep animals happy and healthy. You could almost think of him as an animal psychiatrist.

In the new role he took on this fall, Hutchinson focuses on the treatment and enrichment of animals used for research testing across Johns Hopkins. Those include not only the mice and rats that could be expected but also owls, bats, rabbits, fish, frogs, chicken, pigs, and a variety of primates, including marmosets, macaques, and baboons.

Hutchinson's program, Research Animal Resources, is staffed with veterinarians and technicians who oversee clinical care, surgical support, and husbandry of these animals. It's one part of the structure at Hopkins that ensures compliance with animal welfare laws, alongside the Animal Care and Use Committee.

In recent years, the program—like similar ones across the country—has matured beyond a primary focus on reducing pain for research animals. There's increased emphasis now on creating quality environments for the animals, to maintain their normal behavior and mental well-being, Hutchinson says.

"It's one thing to treat their pain; it's another thing to keep them happy and comfortable," he says.

Beyond enhancements to their living spaces—such as socialization for animals that need it, new toys or treats, or appropriate bedding or nesting materials—Hutchinson says he'll be working on the science of "refinement." This involves active research on animals' very particular preferences and tendencies. "It's looking scientifically at questions like 'Do they prefer this task or that task?' 'Do they prefer this toy or that toy?" he says.

This specialty area with research animals is known as "behavior management," and Hutchinson is an expert at it.

While earning his doctorate in veterinary medicine at Colorado State University, he worked as an enrichment coordinator for lab animals, researching cage environments for mice. He then completed his laboratory animal medicine residency at the Johns Hopkins School of Medicine, studying unexplained weight loss in marmosets. He's now an assistant professor in the Department of Molecular and Comparative Pathobiology, which maintains a strong affiliation with Research Animal Resources.

This path first tugged at Hutchinson as an undergrad, after a visit to an NIH field station where he became intrigued by the science behind monkeys' living spaces. He later returned to NIH, in 2014, to lead its behavioral management program within the Division of Veterinary Resources. There, he worked to treat animals' behavior problems, using psychological techniques or drug therapies when appropriate.

The drug therapies are an area of expertise for Hutchinson that will continue at Johns Hopkins, he says. For example, he's working now on treatments to help monkeys that develop a habit of plucking out their own hair. The disorder has a human equivalent with established drug treatments, which may be beneficial for the monkeys, or vice versa—the research on monkeys could lead to new findings for humans.

With all his work, Hutchinson says, his main interest is upping the standard of care. "We're looking at how to make these animals happy and lead as normal a life as possible within the confines of a research setting," he says.