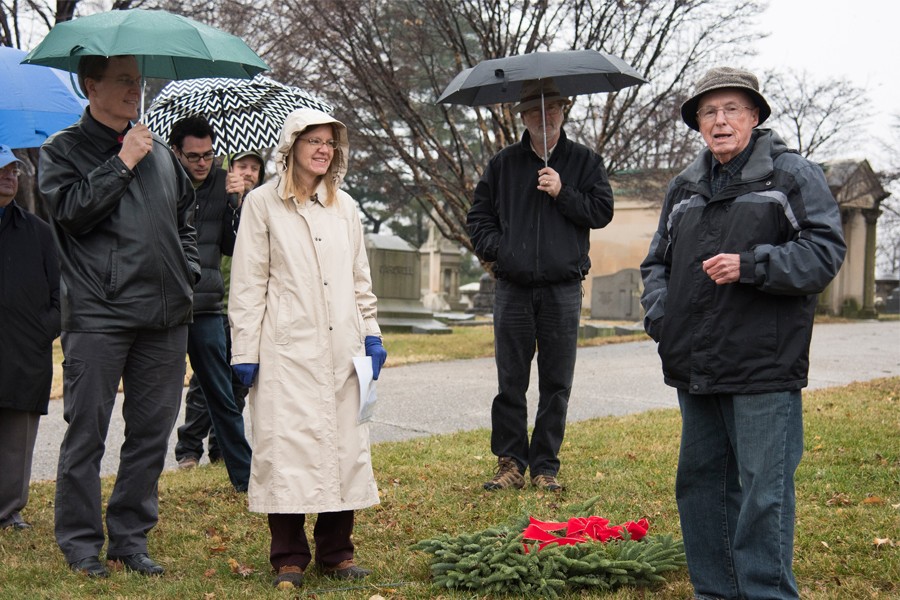 In what has become a Christmas Eve tradition for many Johns Hopkins employees, they gather each year to express gratitude at the graveside of the founder of the university and hospital along with other Baltimoreans who have benefited from his largesse in myriad ways.

Johns Hopkins died on Christmas Eve 1873, bequeathing $7 million to establish the institutions that now bear his name. What many don't know is that Hopkins' instructions to his trustees included a provision to form a training school for nurses. In doing so, the forward-thinking merchant created one of the first nursing schools in the United States.

At this year's Dec. 24 gathering at Green Mount Cemetery, the history of that pioneering directive was shared by Phoebe Evans Letocha, collections management archivist for the Alan Mason Chesney Medical Archives of the Johns Hopkins Medical Institutions.

As 2016 comes to a close, we gather to honor the life and legacy of Mr. Johns Hopkins on this 143rd anniversary of his death. Let us pay special attention to his legacy for nursing education.

1873, the year of Mr. Hopkins' death, was also a momentous year for the birth of professional nursing in America.

On March 10, 1873, Johns Hopkins instructed his trustees, "I desire you to establish, in connection with the hospital, a training school for female nurses. This provision will secure the services of women competent to care for the sick in the hospital wards, and will enable you to benefit the whole community by supplying it with a class of trained and experienced nurses."

These instructions mark the first instance in which a school of nursing was established as part of the founding of a hospital. Where did Mr. Hopkins get his inspiration? What was the state of nursing education in 1873?

Mr. Johns Hopkins was born on May 19, 1795, into a Quaker family in Anne Arundel County, a community of faith that taught him that women have equal right to speak as men. In 1807, Quakers declared ownership of slaves morally unjustifiable, so his family freed the hundred slaves [1] on their tobacco plantation when Johns Hopkins was 12 years old. While his family's fortune dwindled without the forced labor of slaves, Johns Hopkins made his own fortune in Baltimore as a merchant, financier, and railroad investor, as part of the new American economy of the 19th century. He never married, and amassed a huge fortune.

Ethel Johns, author of the early history of the Johns Hopkins School of Nursing, concluded [in the book] that Mr. Johns Hopkins' "interest in hospitals and in nursing obviously stemmed from his personal experience during a terrible epidemic of cholera that broke out in Baltimore in 1832 when he contracted the disease and nearly died of it." The Crimean War in the 1850s and U.S. Civil War in the 1860s also likely demonstrated the need of having skilled nurses to care for the sick and injured.

We also know that Mr. Johns Hopkins served as member of governing boards of several charitable organizations where he witnessed investigations into the operation of institutions established to care for vulnerable populations.

In 1867, Johns Hopkins, Francis King, and Judge George Dobbin served as members of the board of visitors of the Maryland Hospital for the Insane, where an investigation of its nursing service revealed that "the nurses did not possess either method, order, invention, or energy, or are insufficient in number or intelligence, to discharge their duties."

Johns Hopkins made his bequest at the same time that professional nursing schools were being established. After Florence Nightingale's success in reforming nursing care during the Crimean War, she established the Nightingale Training School for Nurses at St. Thomas' Hospital in London in 1860, and its curriculum was based on her 1859 book, Notes on Nursing. Her ideas inspired the United States Sanitary Commission during the U.S. Civil War, and after the war her school was an English model for later American nursing schools.

In September 1872, the New England Hospital for Women and Children, founded by female physicians Drs. Marie Zakrzewska and Ednah Dow Cheney, opened the Training School for Nurses. Linda Richards enrolled as the first of five women in the inaugural training class, who entered the women's hospital for a one-year course of instruction to learn nursing at the hospital. Richards officially became America's first trained nurse when she graduated in September 1873.

In 1871 and 1872, an investigation into the conditions at the Bellevue Hospital by the New York State Board of Charities, led by Louisa Lee Schuyler and other women, prompted the opening of the Bellevue Hospital Training School for Nurses in May 1873. They found that the condition of the public hospitals of the city and county of New York was unacceptable where much of the nursing care was done by pauper women, and that having trained nurses would improve the care in hospitals and diminish patient suffering.

Mr. Johns Hopkins' letter to his trustees in March 1873 comes directly from this same reform movement to establish a professional nursing class in the United States, and his death on Dec. 24, 1873, put that plan into motion in Baltimore. His instruction to establish a nursing school in association with the hospital and university that bore his name proved a lasting legacy that contributed toward the success of the institutions as a model of its kind.

Between 1874 and 1889, his trustees carefully and deliberately went about planning and building the Johns Hopkins Hospital. Trustees hired John Shaw Billings to help plan the hospital, and they consulted with Florence Nightingale and Florence Lees in England as to how to organize the nursing school, adapting that model to the American situation. While the English nursing schools attracted women who might otherwise be employed as domestic servants, the American nursing schools attracted women who might otherwise be teachers and who were searching for a profession open to women.

In early 1889, the leaders of the hospital had the task of selecting the first superintendent of nursing. William Osler told a story of Isabel Hampton being selected because she presented herself as a Greek goddess when being interviewed for the position. In addition to her commanding Athena-like presence, Isabel Hampton came to Hopkins with excellent skills and qualifications.

In 1881, Isabel Hampton had entered the Bellevue Training School for Nurses, the first Nightingale nursing school in the U.S., graduating in 1883. She had gained valuable leadership experience starting in 1886 as the superintendent of the Illinois Training School for Nurses at Cook County Hospital in Chicago. Hampton would go on to be the founding superintendent at Johns Hopkins in 1889, assisted by Lavinia Dock, a fellow Bellevue graduate from 1886. The very same nursing school that may have influenced Mr. Johns Hopkins to designate the founding of a Johns Hopkins School of Nursing also supplied its first leaders.

In May 1889, the Johns Hopkins Hospital opens, and in October 1889, the Johns Hopkins Hospital Training School for Nurses opens, with Isabel Hampton as principal. Adelaide Nutting is among the first class of students. Nutting would succeed Hampton as superintendent of the nursing school when Hampton left to marry Hunter Robb. While she left Hopkins, she did not leave the profession of nursing.

Nutting and Isabel Hampton Robb would go on to lead the nursing profession in America and establish Johns Hopkins at the forefront of nursing excellence and leadership. They established the American Nurses Association and the National League for Nursing Education, The American Journal of Nursing, and the first graduate program in nursing administration, at Columbia Teachers College, for which Nutting left Hopkins in 1907 to become the first professor of nursing.

Hopkins nurses would go on to head other schools of nursing and lead the effort to bring skilled nursing to the U.S. military in the Spanish American War, World War I, and World War II. Hopkins nurses were active in the suffrage movement and demanded that women would be empowered to set policies that would affect the public health. They led public health campaigns to prevent childhood blindness and the spread of tuberculosis and other communicable diseases. They brought the Hopkins model of nursing education to all the corners of the globe wherever they traveled, whether it be Alice Fitzgerald in the European countries ravaged by World War I, or Anna Wolfe at Peking Union Medical College in China in the 1920s, or Grace Alt in Japan after World War II.

Today, the Johns Hopkins University School of Nursing carries on that legacy as a globally recognized leader in nursing education, with advanced-degree programs for both women and men. In Saudi Arabia, under a partnership with Johns Hopkins that kingdom's first-ever Doctor of Nursing Practice program is beginning to revolutionize its health care. Meanwhile, Johns Hopkins nurse researchers—women and men—lead the way on addressing violence against women in war-torn Africa as well as the United States. Nursing interventions developed at Johns Hopkins have improved cardiovascular and dementia care across the planet.

The influence of Hopkins nurses has been profound and continues to prove the vision of Mr. Johns Hopkins' legacy, not just to the benefit to his hospital and university but to the city of Baltimore, state, nation, and the world. For this, we humbly gather here today to thank Mr. Johns Hopkins and honor his legacy.