Mayor Stephanie Rawlings-Blake's proposed changes to Charm City Circulator routes have many Baltimore City residents seeing red—among them, those who ride the Green and Purple routes to commute to work.

Under the mayor's plan, the Green route that connects Johns Hopkins' East Baltimore campus with Fell's Point and downtown would be eliminated, and the Purple route's northward expansion to Charles Village, which provides access to the university's Homewood campus, would be shut down. The Banner route between the Inner Harbor and Locust Point also would be eliminated.

The Office of Government and Community Affairs encourages Johns Hopkins employees who would be affected by the changes to attend one of the four public meetings that have been scheduled by the city's Department of Transportation. The first is at 6 p.m. on Monday, Aug. 29, at St. Philip and James Catholic Church at 2801 N. Charles St. The complete schedule is posted on the Charm City Circulator website. 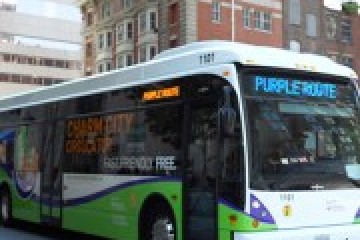