How to eat your way through the workday 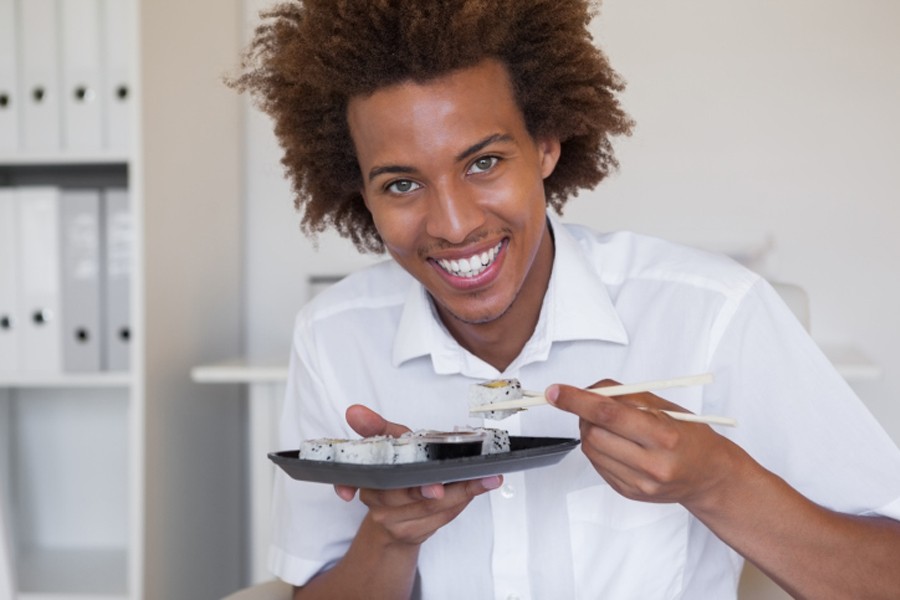 The taco Tuesday lunch tasted yummy and powered you through that 1 p.m. conference call, but now you're running on fumes. All you can think about is taking a nap. And that mental sharpness you had at 10 a.m. has long since deserted you and been replaced by brain fog. Wait, is there a blueberry muffin left in the break room? If so, salvation awaits.

Sound familiar? Many workdays have been derailed by the dreaded 3 p.m. crash, which in your case might have hit midmorning. Ah, the day started so well, so what went wrong? Christine McKinney, a clinical dietictian at Johns Hopkins Bayview Medical Center, says the afternoon slump is often a result of what we previously ate—and what we didn't.

"Many processed foods contain excessive amounts of sugar and carbs, which increase your insulin levels and leave you feeling fatigued," McKinney says. "Or maybe you're dehydrated, and that's why you're a bit cloudy and sleepy."

To avoid this trap and sustain energy levels throughout the day, McKinney suggests combining mindful eating and smarter food choices, a mixture that begins with a good breakfast.

"I know it's become a cliché, but breakfast is really the most important meal of the day, and I advise all my clients to not skip this meal," she says.

But don't think that scarfing down a bagel and cream cheese will get the job done. McKinney says you want to craft a meal that contains a mixture of protein, carbs, and healthy fats. Yes, fats. "We've been ingrained with this notion that all fat is bad, but it's OK and part of a healthy diet."

She says look for foods with unsaturated (monounsaturated and polyunsaturated) fats, which can be found in nuts, oils, and fatty fish like salmon and tuna. McKinney suggests thinking beyond the typical bowl of cereal. Consider instead some eggs and avocados in a whole-grain wrap.

The next big decision of the day is what to pack for lunch and snacks. McKinney says that bringing meals with you puts you in control, in terms of both quality and quantity.

Here, too, make sure to include protein and healthy carbs and fats. Also, consider what you ate for breakfast. Did you have two slices of toast with your eggs, or add a doughnut? If the answer is yes, maybe think of going lighter on the carbs throughout the rest of the day.

A growing list of nutrition experts recommend six minimeals per day to help curb your appetite and stabilize blood sugar, but McKinney says there's nothing wrong with the traditional three square meals with snacks as needed. "It's all down to individual preference and what you're comfortable with," she says.

For snacks, avoid chips and candy, which are high in calories and saturated fats. Pretzels might seem like a healthier alternative, but they're high in sodium. Instead, consider these healthier options: a few pieces of cheese, apple slices with peanut butter, plain Greek yogurt with blueberries, or hummus and veggie sticks. Or get creative. "There's nothing wrong with a baked potato and some salsa," she says.

As for when to eat, McKinney says go with your gut, literally. "Eat when you're hungry. If you had breakfast at 6 a.m. and now it's 10:30 and you're hungry, that's normal. It means your metabolism is working," she says. The general rule of thumb is a meal every four hours, although many people push dinner to a later time because of work and commutes.

And don't forget to drink.

McKinney says she can't stress enough the importance of staying hydrated to help with mental alertness and feeling satisfied. Avoid the temptation for soda, juice, and sweetened teas, which are high in calories and can have added colorings and artificial ingredients. Diet drinks sound like a good option, but the artificial sweeteners may leave you craving more sweets. Too many cups of coffee might leave you jittery. So stick with water, McKinney says, maybe with some lemon or frozen fruit dropped in to add some flavor. Hot tea is also a good alternative, she says; just don't load it up with cream and sugar.

"You should have a water bottle on your desk the whole day," she says. "The bottle itself will remind you to drink." For how much water to consume, think half your body weight: A 160-pound person, for example, should drink 80 ounces of water per day.

McKinney also tells her clients to practice mindful eating. Too often we shovel down our food and blindly eat what is in front of us. She recommends actually using your lunch break to eat rather than carving out five minutes while working at your computer. "Slow down your rate of eating. Let the food register in your body," she says. "Chew purposefully and think about what you're eating and how it makes you feel."

If a meal or specific food item left you hungry and tired, she says, maybe think twice next time about choosing that option.

The benefits of mindful eating go beyond the joys of actually tasting your meals, she says, as you might also shed some pounds. And who doesn't want that?