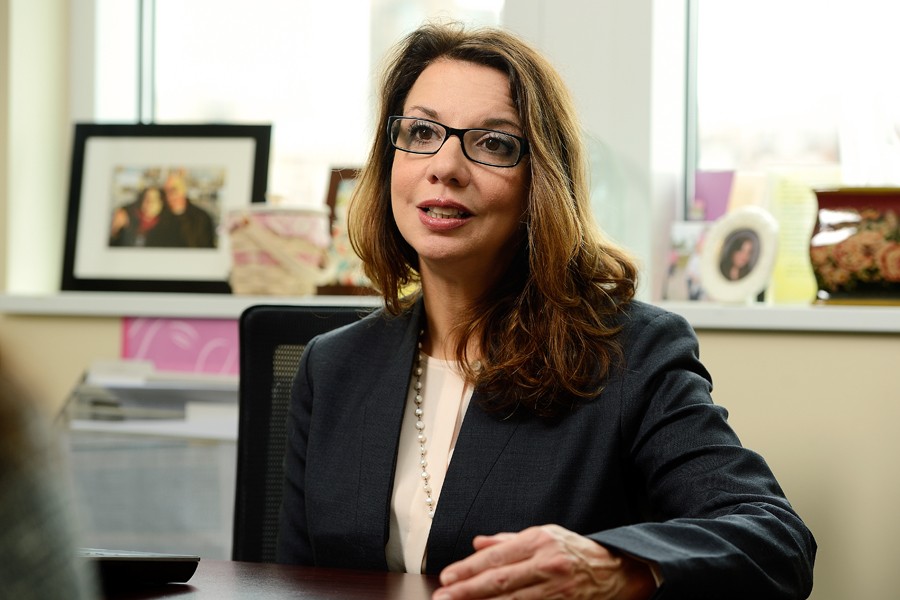 Image caption: As oncology nurse navigator, Marie Borsellino is literally Ms. Everything for the Managing Cancer at Work program now being used by hundreds of employees

Two years ago, around Halloween, Raymond Smith was plagued by symptoms of fatigue, such as headaches and loss of appetite, and dismissed those like a tough guy refuses an umbrella in the rain. But when his back inexplicably began to ache, and simple acts like getting in and out of a car became chores, the research specialist for the School of Medicine's Department of Psychiatry and Behavioral Sciences made an appointment at the Johns Hopkins Outpatient Center, assuming he'd be prescribed pain medicine and sent on his way.

Smith would stay at the hospital the next seven days. Doctors diagnosed him with chronic lymphocytic leukemia, a type of cancer that starts in the bone marrow and then goes into the blood. The leukemia cells often build up slowly over time, and many people don't show symptoms for years.

After he started responding to medication, Smith had to take a month off. But he did it grudgingly. "I'm an active person, so it drove me crazy," says Smith, a 55-year-old who regularly goes to the gym and plays softball.

He would gradually acclimate himself to the workplace, where he received generous support and understanding from colleagues. However, he found talking about his cancer awkward, and not just with co-workers but family and friends who wanted regular updates on his health. Some questions were harmless and well-meaning; others left him dumbfounded. What do you say to someone who asks, So, how much time did the doctors give you to live?

Smith's supervisor encouraged him to look into Managing Cancer at Work, a new program created at Johns Hopkins to meet the needs of employees dealing with a cancer diagnosis or caring for someone with the disease. The program, launched in January 2015, also provides information designed specifically for supervisors on how best to support employees through a cancer journey.

"My supervisor told me, 'We all know what you have, but we don't know what you're going through,'" Smith says.

Managing Cancer at Work hosts a monthly support group where employees can discuss their cancer, workplace-related issues and concerns, and adjusting to a "new normal." Smith agreed to go, and has yet to miss a meeting. "I'm glad I did it," he says. "Until I started coming to these sessions, I didn't know how to handle talking about my cancer."

Smith says the group helped him open up to friends, like his softball teammates, and a brother he felt was avoiding him because of his unease about confronting the diagnosis. The group also proved invaluable when Smith was diagnosed this summer with prostate cancer and needed even more positive encouragement. He successfully completed eight weeks of radiation therapy in the fall.

Marie Borsellino, the oncology nurse navigator and heartbeat of Managing Cancer at Work, says the program was designed for people, like Smith, who need guidance, support, and empathy at a difficult and vulnerable time in their lives.

"I think the program has helped Ray find his voice," says Borsellino, who joined Johns Hopkins in September 2014 after 14 years at the Sarasota Memorial Health Care System in Florida, most recently as breast health navigator.

A common theme in group sessions, Borsellino says, is the importance of having open lines of communication. "Once the employee opens the dialogue, they put everyone at ease," she says. "Because of HIPAA and privacy, a supervisor may not even ask the employee what's going on, and that has a chilling effect as it leads the employee to think Does anyone even care? Cancer sometimes is something you can't hide. One day you walk in with hair, the next day you don't. How can you ignore that? So we talk about what is safe and what is not to promote a successful workplace experience."

According to the American Cancer Society, one in two men and one in three women will face cancer in their lifetimes. By 2024, there will be an estimated 19 million cancer survivors in the United States. For millions nationwide, a cancer diagnosis disrupts not only their personal lives but also their work lives. In 2015, approximately 600 employees at the Johns Hopkins Hospital and Johns Hopkins Bayview Medical Center alone were diagnosed with cancer, with an estimated 1,300 university employees undergoing some form of cancer treatment or care. Thousands of other employees serve as caregivers for spouses, children, or parents who have the disease.

Many employees affected by cancer want and need to continue working, says Terry Langbaum, chief administrative officer of the Johns Hopkins Kimmel Cancer Center and co-creator of Managing Cancer at Work, along with Lillie Shockney, University Distinguished Service Associate Professor of Breast Cancer and administrative director of the Johns Hopkins Breast Center and the Johns Hopkins Cancer Survivorship Programs. The two women, both cancer survivors, developed the unique three-part program—education, advocacy, and navigation—over two years to aid employees who are at risk for cancer, have cancer, or are caring for someone with the disease. In 2015, the program was piloted at Johns Hopkins and Connecticut-based Pitney Bowes, and is now being actively marketed to other companies nationwide.

The program, which is free to all Johns Hopkins University and Health System employees, features a website that serves as a catchall for cancer-related questions and concerns. The site, for example, features real-life stories and role-playing videos to suggest ways for an employee to tell supervisors and colleagues about his or her diagnosis. It also contains hundreds of links to information about the most common cancers, their treatments, and necessary resources such as hospital policy/health insurance. A separate portal supports Johns Hopkins managers by offering advice on how to respond appropriately upon learning that a staff member has cancer, and how best to manage work accommodations.

The program also focuses on cancer risk prevention and the early signs of disease. Website users can enter their age, family medical history, and other details and receive a summary of what cancers they might be at high risk for, and a list of screening tests they should ask for at their annual physicals.

All employee interactions with the program are confidential.

Frequently, employees are concerned about revealing their cancer status to an employer, or struggle with work and treatment schedules, Shockney says. Many, she says, need to better understand their benefits and rights so they feel more at ease asking for time off or to rearrange their work schedule to undergo therapy or care for someone in treatment.

Shockney knows that confusion and anxiety come with the territory.

"I come from two perspectives, as an employee who was diagnosed with breast cancer and as a clinician who's had people come through my doorway crying," Shockney says. "The program helps people get through the candid questions like, How much time will I miss from work or If I'm up for a supervisor role, will this mean I get derailed? Life can get chaotic after a diagnosis, and not just for the person who is sick. A manager is trying to figure out what she can or can't say. Everyone is trying to make reasonable accommodations. It's a fluid situation."

As oncology nurse navigator, Borsellino is literally Ms. Everything for Managing Cancer at Work. Employees and supervisors interact with her through email, phone calls, or face-to-face meetings. She frequently reaches out to department managers and shows up at Johns Hopkins health fairs to remind employees about the program. She also facilitates the support group meetings, where she provides a calm and reassuring voice, and writes down matters she needs to follow up on. If needed, she can advocate on behalf of an employee if an accommodation is not being made. In addition to her own wealth of knowledge on cancer, Borsellino has access to a network of more than 5,000 nurse navigators in other states so she can assist employees caring for someone outside the area.

Jeffrey Nguyen, an assistant administrator with the Department of Gynecology and Obstetrics at the Johns Hopkins Hospital, used the program after his mother in North Carolina was diagnosed with an aggressive stage IV uterine cancer. "It's overwhelming to learn of a diagnosis like this, especially when you're so far way," Nguyen says. "Marie helped me learn about what to expect from [my mother's] surgery and treatment. And she helped my mother connect with a cancer care navigator at the hospital in North Carolina, who helped guide my parents through the process."

Nguyen, who attends the support group for caregivers, says the program helped him prepare mentally for how to interact with his mother, and let him know what his rights as an employee were in terms of how to approach his supervisor for time off.

Borsellino says that more than 200 Johns Hopkins employees have contacted the Managing Cancer at Work program to date, and a steady stream of them have participated in the support groups. She considers her work a joy.

"I truly believe in what we're doing," she says. "The goal is to get people back to work, back to normalcy. It's been a privilege to be part of this."

Smith says he's doing his best to return to his normal. He continues to work, has his red blood cell count checked every two weeks, and takes medication to manage his condition. He's also back in the gym and on the softball field, where he doesn't mind talking about his cancer as much anymore. It's part of his identity now.

To speak with the oncology nurse navigator, Marie Borsellino, email managecancer@jhmi.edu or call 410-955-6229. 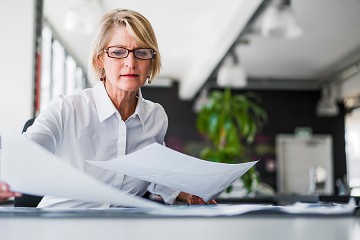