David J. McConkey has been appointed director of the Johns Hopkins Greenberg Bladder Cancer Institute, whose members include experts from the Sidney Kimmel Comprehensive Cancer Center, the James Buchanan Brady Urological Institute, and the School of Medicine's departments of Radiation Oncology and Molecular Radiation Sciences, Surgery, and Pathology. 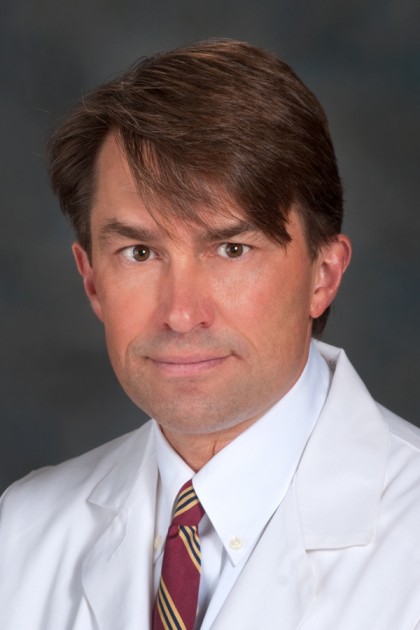 The institute was established in 2014 with a $15 million gift from Baltimore-area commercial real estate developer Erwin L. Greenberg and his wife, Stephanie Cooper Greenberg, and a $30 million investment from Johns Hopkins University. Its faculty, which already has drawn $500,000 in research grants, is dedicated to advancing the scientific understanding of bladder cancer and improving its treatment.

"We are thrilled to bring David on board," says William Nelson, the Marion I. Knott Professor and director of the Johns Hopkins Kimmel Cancer Center. "He brings a wealth of knowledge about the biology of bladder and genitourinary cancers, and has proven leadership skills in a top-notch institution."

McConkey comes to Johns Hopkins after serving as director of urological research at the University of Texas MD Anderson Cancer Center in Houston, where he played a leadership role in the multidisciplinary bladder cancer research program and served as co-principal investigator of the MD Anderson Specialized Program of Research Excellence in Bladder Cancer, now in its third continuous cycle of funding from the National Cancer Institute. He also is chair for translational medicine for the Genitourinary Cancers Committee of the Southwest Oncology Group and has been involved in setting agendas for the Bladder Cancer Advocacy Network's clinical initiatives.

Alan W. Partin, a professor and chairman of the Department of Urology and the Jakurski Family Director of the James Buchanan Brady Urological Institute, says, "David's recruitment is an outstanding example of high-impact philanthropy. Because of the generous support of Erwin and Stephanie Greenberg, who have been tireless advocates for this and other important causes, we are poised to set new standards for innovation, treatment, and discovery in the field of bladder cancer."

McConkey says that he is "firmly convinced that team science is the most rapid path to progress."

"I look forward to serving as the hub of an institutional and international community of researchers who share a commitment to advancing the scientific understanding of bladder cancer and improving its treatment," he says.

McConkey, a faculty member at MD Anderson for over 20 years, has published more than 200 articles in peer-reviewed journals, served on 90 advisory committees at MD Anderson, and won numerous teaching awards. "David's research, teaching, and leadership talents will be instrumental as we continue to grow our bladder cancer research program," says Paul B. Rothman, dean of the medical faculty and CEO of Johns Hopkins Medicine. "He is committed to focusing our research efforts on questions that will have substantial impact for our patients."

McConkey earned his bachelor's degree in biochemistry and American history from Brown University in 1986 and his PhD in biochemical toxicology from the Karolinska Institutet in Stockholm in 1989. He completed a research fellowship in the Laboratory of Immunobiology at Dana-Farber Cancer Institute in Boston.

McConkey's appointment at Johns Hopkins follows what Theodore DeWeese, the Sidney Kimmel Professor and director of the Department of Radiation Oncology and Molecular Radiation Sciences, describes as "a very thorough recruiting process where we evaluated the best, most highly qualified candidates in the country." McConkey, he says, "stood out to us as someone with both the experience and the collaborative spirit to direct the Greenberg Bladder Cancer Institute to its greatest level of success."

William Isaacs, the William Thomas Gerrard, Mario Anthony Duhon & Jennifer and John Chalsty Professor of Urology and a professor of oncology at Johns Hopkins, served as interim director of the institute from its inception in May 2014.

"We are especially grateful to William Isaacs for serving as interim director these past 19 months," Nelson says. "He led the team through two rounds of competitive grant awards, the establishment of a national external advisory board, and a series of outreach initiatives to physicians nationwide."