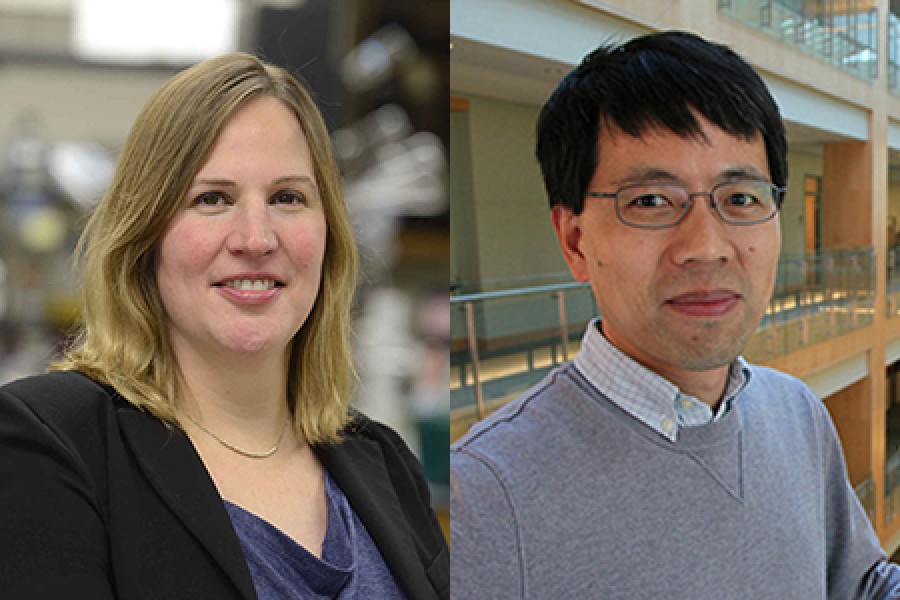 The Johns Hopkins Institute for NanoBioTechnology recently announced that Sharon Gerecht and Hai-Quan Mao have been appointed as associate directors, effective Jan. 1, 2016.

"The addition of Gerecht and Mao to the institute's leadership team will be crucial in developing new research areas," says Peter C. Searson, director of the institute and the Joseph R. and Lynn C. Reynolds Professor in Materials Science and Engineering at the Whiting School of Engineering.

Gerecht and Mao are both engaged in collaborative projects with investigators in the university's schools of Medicine, Public Health, and Arts and Sciences, and Applied Physics Laboratory.

Gerecht, the Kent Gordon Croft Investment Management Faculty Scholar and an associate professor of chemical and biomolecular engineering, has been a member of the INBT since she arrived at Johns Hopkins in 2007. Her research interests include stem cell differentiation, biomaterials development, and tissue engineering approaches for regenerative medicine and cancer. In 2015, Gerecht received the inaugural President's Frontier Award from Johns Hopkins University, in recognition of her scholarly achievements and exceptional promise.

Mao, a professor of materials science and engineering, has been active in the INBT since its inception in 2006. He holds joint appointments in the Translational Tissue Engineering Center in the School of Medicine and the Whitaker Biomedical Engineering Institute. His research focuses on creating nanofiber matrix platforms to direct stem cell expansion and differentiation, nanomaterials to modulate the immunoenvironment and promote neural regeneration, and developing nanoparticle systems to deliver plasmid DNA, siRNA, vaccines, and other therapeutic agents.

"INBT has been instrumental in advancing science and engineering in critically important areas of research," says Ed Schlesinger, the Benjamin T. Rome Dean of the Whiting School. "An additional manifestation of the INBT's success and growth is the astonishingly talented faculty who are part of the institute and who are willing and able to take on leadership roles. I have no doubt that in their new roles Sharon and Hai-Quan will help advance the INBT's mission and its stellar reputation."

INBT was launched in 2006 with support from U.S. Sen. Barbara Mikulski to promote multidisciplinary research at the interface of nanotechnology and medicine. With more than 250 affiliated faculty members from the Johns Hopkins schools of Engineering, Arts and Sciences, Medicine, and Public Health and scientists from APL, the institute is home to several center grants and numerous education, training, and outreach programs.