Anthony D. So, a leading expert in access to health technologies, innovation, and public health practice, has been named director of the Johns Hopkins Center for a Livable Future and will be the inaugural Robert S. Lawrence Professor in the Department of Environmental Health Sciences at the Johns Hopkins Bloomberg School of Public Health. So will assume full-time leadership of the CLF on Jan. 1. 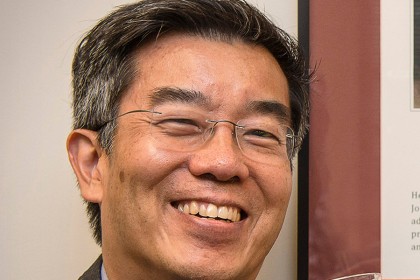 He succeeds the center's founding director, Robert S. Lawrence, who is stepping down. Lawrence will remain involved in the CLF as an adviser and will retain joint faculty appointments with the Bloomberg School's departments of Environmental Health Sciences and International Health.

"We are delighted that Anthony So is joining us to lead the Center for a Livable Future. He is a leader with an outstanding track record of research and policy work," says Michael J. Klag, dean of the Bloomberg School. "The center has made tremendous contributions to our understanding of the food system and its relationship to public health and the environment. Dr. So brings a wealth of experience that will enhance the center's research, education, communication, and policy activities to address some of public health's most pressing issues."

So is currently a professor at Duke University's Sanford School of Public Policy, where he directs the Program on Global Health and Technology Access. His work addresses issues of globalization and health equity, from innovation and access to health technologies to tobacco control in low- and middle-income countries.

He also leads the strategic policy program of ReAct, a global network dedicated to meeting the challenge of antibiotic resistance, and has served on the Lancet Infectious Diseases' Commission on Antibiotic Resistance and the Institute of Medicine's Committee on Accelerating Rare Disease Research and Orphan Product Development. He has chaired a World Health Organization expert working group on fostering innovation to combat antimicrobial resistance and was part of the Antibiotic Resistance Working Group of the President's Council of Advisors in Science and Technology. He also studies antibiotic innovation as a current recipient of the Robert Wood Johnson Investigator Award in Health Policy Research.

Throughout his career, So has worked to mentor a generation of future leaders in global health. Since 2005, he has directed Duke's Global Health Fellows program, which exposes students to global health policy course work and internships in Geneva. He has served on a diverse range of nonprofit boards and is currently on the boards of Public Citizen, one of the nation's most prominent consumer groups; and Community Catalyst, a leading national organization that works to ensure quality affordable health care for all.

Before joining Duke, So was associate director of Health Equity at the Rockefeller Foundation, where his strategic approach to grant making improved access to HIV/AIDS medicines in low- and middle-income countries and where he also worked to establish regional tobacco control in Southeast Asia. As a senior adviser, he oversaw activities at the Agency for Health Care Research and Quality's Liaison Office and served as a White House Fellow. During his time working for the government, he received the Secretary's Distinguished Service Award three times.

"The parallels between Dr. So's approach to improving public health policies and our work at the CLF make him uniquely suited to take over the helm," Robert Lawrence says of his successor. "Dr. So brings to the CLF a wealth of experience assessing strategic points of intervention along the value chain, applying interdisciplinary research and working closely with governmental agencies and NGOs to develop and improve policies."

"Much of my work has focused on two tales of globalization—one where the expectations of lifesaving medicines cross borders but the access to these drugs lag behind, and the other where tobacco readily crosses borders but consumer protections lag behind," So says. "Out of these asymmetries in globalization come significant health inequities. Food systems are even more complex and challenging, but what could be more basic and fundamental to health? I am excited to grow the remarkable work of the center, and it is such an honor to build upon the extraordinary legacy left by Bob Lawrence."

Marsha Wills-Karp, chair of Environmental Health Sciences, says, "The leadership and contributions of the Center for a Livable Future to our understanding of the food system and its relationship with the environment are significant. Dr. So brings an impressive body of research and policy experience addressing a range of issues, including antibiotic resistance, tobacco control, and improving access to medicines. The Department of Environmental Health Sciences welcomes Dr. So and looks forward to his contributions advancing our work in environmental health."