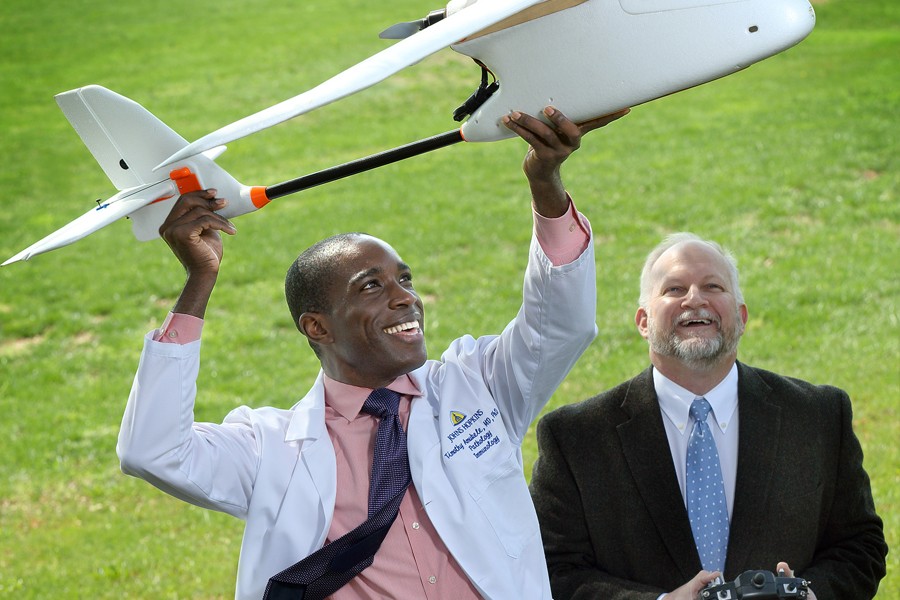 Image caption: Timothy Amukele, left, of the School of Medicine is teaming with Robert Chalmers and other APL engineers to create a courier system that will use unmanned aerial vehicles to transport blood to diagnostic laboratories in Africa.

A web of innovative new research has just started to unspool across Johns Hopkins University and beyond it, at sites across the world. Sixty faculty-led projects, their topics ranging from climate change and HIV to ancient ceramics, psychedelic mushrooms, and the symphony, have launched this fall from the Discovery and Catalyst awards programs.

On Sept. 3, a celebration at the university's George Peabody Library will honor the dozens of faculty members undertaking the diverse projects, which together benefit from some $5 million in funding through the awards this year.

For this inaugural round, the Catalyst Award is providing up to $75,000 to 37 early-career scholars to support their research endeavors, while the Discovery Award is granting 23 cross-divisional faculty teams up to $125,000 for collaborative projects.

One collaboration expanding through the Discovery Award this year is that of Timothy Amukele, an assistant professor of pathology in the School of Medicine, and his partners at the Applied Physics Laboratory, who are working to develop a system of drones that can deliver blood samples to health clinics across the otherwise tough-to-traverse terrain of Kenya's Nzoia district. Amukele, who spent the summer in Kenya preparing for a pilot of the system, is working with APL to develop simulations and "smarter, safer" small civilian drones, he says.

If the concept succeeds, he says, "it will likely spread and be widely adopted" in other parts of the world where biological sample transport is difficult. Without the Discovery Award, Amukele says, "this novel, game-changing idea would have never seen the light of day."

An equally ambitious idea comes from a six-member team that's looking—very big picture—at climate change and its impact on the global food system. While most previous research on climate change and agriculture has focused mainly on temperature and precipitation, this new large-scale study will use mathematical models to consider broader societal, economic, and political factors, such as conflict and migration.

In keeping with the Discovery Awards' interdisciplinary focus, the faculty research team fuses together backgrounds in science, engineering, public health, and the social sciences—a diversity that's "absolutely needed in order to solve these big global environmental problems," says Cindy Parker, an assistant professor in Occupational and Environmental Health in the School of Public Health and associate director of the JHU Environment, Energy, Sustainability and Health Institute. "To do interdisciplinary work well, you need to spend a lot of time together, brainstorming about different people's skills, methods, and approaches to the problem," she says.

The Catalyst Awards, meanwhile, are targeted specifically at professors within their first decade at Johns Hopkins, who are "at a critical moment in their careers when startup funds and external support can be challenging to secure," as JHU President Ronald J. Daniels has described it.

For Matthias Matthijs, a Catalyst Award means he can spend the next year researching and writing his second book, which will focus on the gradual erosion of established democratic legitimacy in the United States, the United Kingdom, and France. The funding will allow Matthijs, an assistant professor of international political economy at SAIS, to travel to Paris and London to conduct research and interviews with political party officials, technocrats, and lobbyists of the financial sector.

Matthijs praised the award for giving young professors the signal that "Johns Hopkins is investing in our careers early on, giving us a significant boost in pursuing new research."

Another benefit of the Catalyst, as recipient Lauren Hersch Nicholas describes it, is "the chance to meet new people from all over campus" through both mentoring and peer events.

Nicholas, who is an assistant professor in Health Policy and Management at the School of Public Health and in Surgery and Oncology at the School of Medicine, is studying how trends in consumer credit data might be used for a positive health use: catching warning signs of cognitive impairment or physical decline. The Catalyst Award, she says, offers a bridge to launch her research before she goes after a larger grant through an agency such as the National Institutes of Health.

The increasing lack of access to that type of traditional government grant was one impetus to establish both the Catalyst and Discovery awards, which provide an internal funding stream for faculty. Over three years, the awards will grant $15 million total to support innovative research.

The Office of the Provost provides a full list online of both the Discovery and Catalyst winners who will be honored Sept. 3.