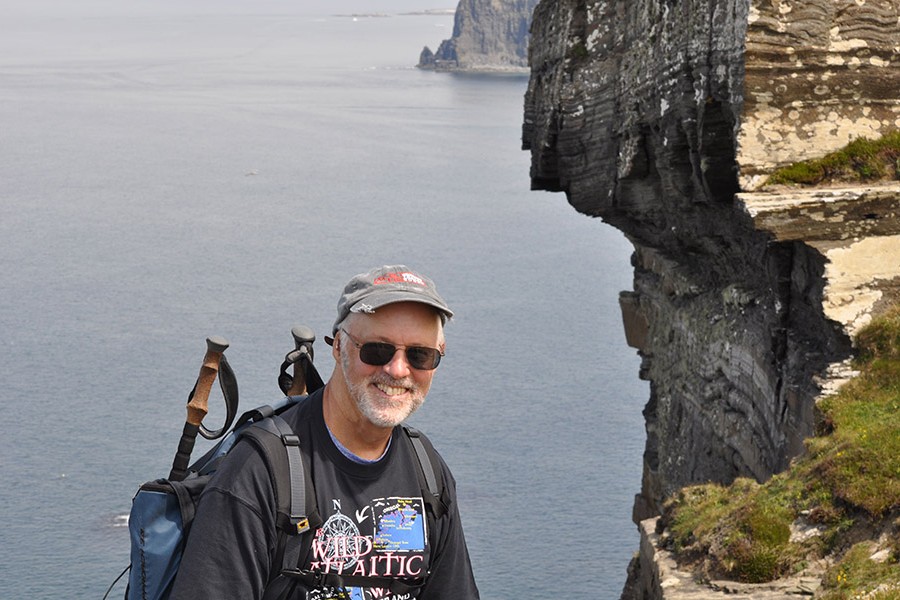 Image caption: Gerard Anderson, a professor in Health Policy and Management, on the west coast of Ireland, the place from which the Vikings left to go to Iceland and begin their journey to the New World.

"During my sabbatical, I was able to write several papers, prepare a grant, and do considerable media work for a published paper. I also followed the path of the Vikings from Scandinavia to the New World.

"My paternal grandparents came from a small farming town in central Sweden, where we can trace their ancestry back to the 1600s. However, in my mind, my distant relatives were Vikings in the ninth and 10th centuries, exploring the world.

"After going to the family homestead, I went to Dublin, a town founded and named by the Vikings. The Vikings first came to Dublin to pillage but decided it was very nice and wanted to stay. First, they were expelled—surprising that people who pillaged the land were not welcomed initially—but then they returned and were integrated into society.

"Continuing their voyages, they moved on to Iceland. A study of the genealogy of Iceland suggests that while nearly all the male genes came from Scandinavia, 70 percent of Icelandic descendants had genes from women who came from Ireland. I guess it was difficult to persuade a Scandinavian woman to go to Iceland.

"Erik the Red was someone born in Iceland and was an all-around bad guy; he was banished from Iceland for killing someone and was sent farther west. He named the place Greenland in the hopes of attracting more settlers. Greenland became a major Viking settlement for several centuries. However, it has a very short growing season, and when you visit, you will see that even during the summer there are icebergs floating all over.

"Leif Erikson, the son of Erik the Red, in an attempt to escape his father went even farther west and landed in L'Anse aux Meadows at the top of Newfoundland. It is the only verified European settlement in North America before Christopher Columbus. If you go, you can see the brooch that was left behind that proves that they landed.

"The trip from Sweden to L'Anse aux Meadows can be easily done in a short sabbatical. However, for the Vikings it required almost three years because they needed to winter in Iceland and then in Greenland. A look at the ships they used makes you wonder how they ever made it.

"On my next sabbatical, I will examine why the Vikings decided that North America was not hospitable. They lasted only 10 years in North America."