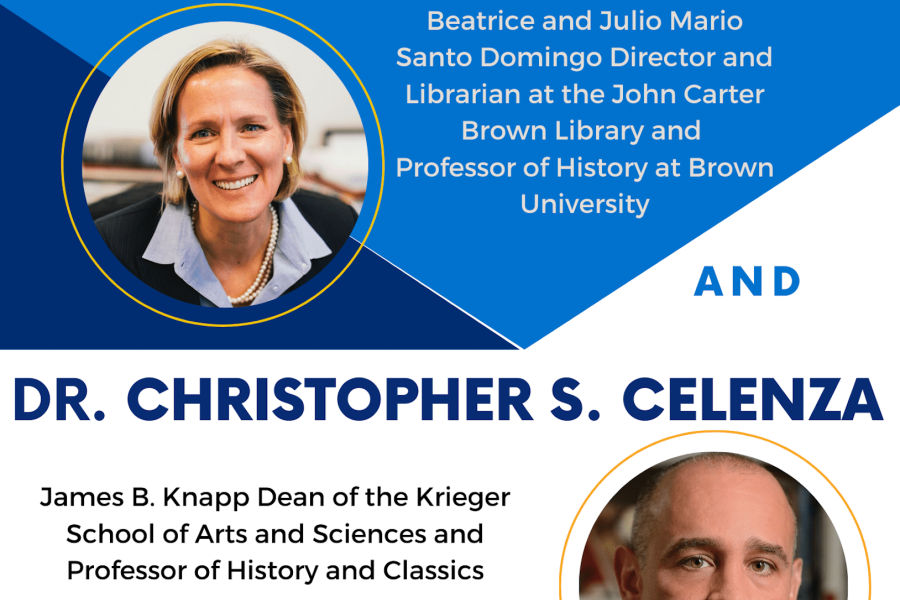 PHutures welcomes all students, staff, and faculty to the upcoming Fireside Chat, "Scholar, Teacher, and Leader: a Career Within and Beyond Academia." On Monday, November 15th at 12pm EST, the chat will highlight the career of JHU alumna Dr. Karin Wulf, the newly appointed Beatrice and Julio Santo Domingo Director and Librarian at the John Carter Brown Library and Professor of History at Brown University.

Dr. Wulf will join Dr. Christopher S. Celenza, the James B. Knapp Dean of the Krieger School of Arts and Sciences and Professor of History and Classics, in a conversation about the robust career she has led within and beyond academic circles.

For this intimate conversation, Associate Director of PHutures, Dr. Christine Kelly, is excited to give students an example of a woman in academia striving to put identity and inclusivity at the forefront of their careers while navigating both academic and academic-adjacent circles: "We're hoping that Dean Celenza's conversation with Dr. Wulf introduces attendees to an accomplished historian whose work has not only made significant inroads within the discipline of history, but whose career has transcended the boundaries of traditional academic work."

Dr. Wulf has been introducing a strategic vision for the library's priorities and identifying opportunities for growth while guiding its regular programs and operations since taking the helm as Director of the John Carter Brown Library in August 2021. She strives to always champion her commitment to diversity and inclusion as evident through in her recently held role as Executive Director of the Omohundro Institute, where she dedicated herself to expanding the field of early American history to include more practitioners and perspectives. Dr. Wulf co-founded "Women Also Know History," a media and curriculum tool that promotes the work of professional women historians and connects them to one another, and co-chaired the Neurodiversity Initiative at William & Mary to support neurodiverse students.

A dedicated scholar and teacher, Dr. Wulf also served as the Book Review Editor for the William and Mary Quarterly and directed the undergraduate studies program for American Studies at William & Mary. An early American historian, she has written about women, gender, and political culture in eighteenth-century British America.

"Dr. Wulf's career -- her excellent scholarly work, creative administrative leadership, and her broad vision for how to communicate in the realm of the humanities -- shows that doctoral degrees in the humanities lead to multiple career outcomes, all of which have validity and importance," said Dean Celenza.

In addition to attending this chat, audiences can also submit their own questions to a post-discussion Q&A for Dr. Wulf as well as Dean Celenza. Click here to register for this Fireside Chat