A program that covers the cost of attending Johns Hopkins University for high-achieving public-school students in Baltimore and Washington, D.C. will be renamed to honor the late U.S. Rep. Elijah Cummings.

The highly impactful Baltimore Scholars Program, established in 2005, and its recently created D.C. counterpart will become the Cummings Scholars, linking an effort to empower young people to an inspirational leader whose life embodied what's possible with opportunity and who spent years in service fighting to bring those same chances to his constituents. 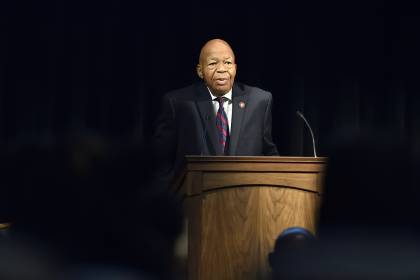 "My late husband was a staunch supporter of Johns Hopkins University and development programs for youths and young adults," said Dr. Maya Rockeymoore Cummings. "Elijah would have been ecstatic to have a scholars program with such a fabulous mission established in his name at Hopkins."

"Congressman Cummings fought tirelessly throughout his career to create educational opportunities for young people in Baltimore and across the nation because he believed in the power of education to change lives, transform communities, and invigorate democracy," said Johns Hopkins President Ron Daniels. "The Cummings Scholars are living embodiments of Congressman Cummings' legacy, and we look forward to all that they will accomplish in the years ahead."

In choosing a name that would add to the rich legacy of the Baltimore and D.C. Scholars, the university wanted an individual who would represent the best of Baltimore and the nation's capital, and whose name would resonate with young people dreaming of attending college. With Rep. Elijah E. Cummings, they had both of those elements, as well as a strong, meaningful connection to the Johns Hopkins community, Baltimore, and Washington.

Cummings, a Baltimore native, represented the 7th Congressional District of Maryland for 23 years until his death in 2019. His many leadership roles included serving as chair of the Congressional Black Caucus and the House Oversight and Reform Committee. Throughout his legislative career, he advocated passionately for policies to help poor and working-class Americans, once proclaiming that, "The true measure of our union is the state of the least among us."

Before serving in the U.S. Congress, Cummings served for 14 years in the Maryland House of Delegates, where he was the first African-American in Maryland history to be named Speaker Pro Tempore.

In 2015, the university presented him with one of its highest awards, an honorary degree recognizing his years of public service to his country and his hometown and his commitment to the well-being of his constituents through access to high-quality health care and education, clean air and water, and a stronger economy. 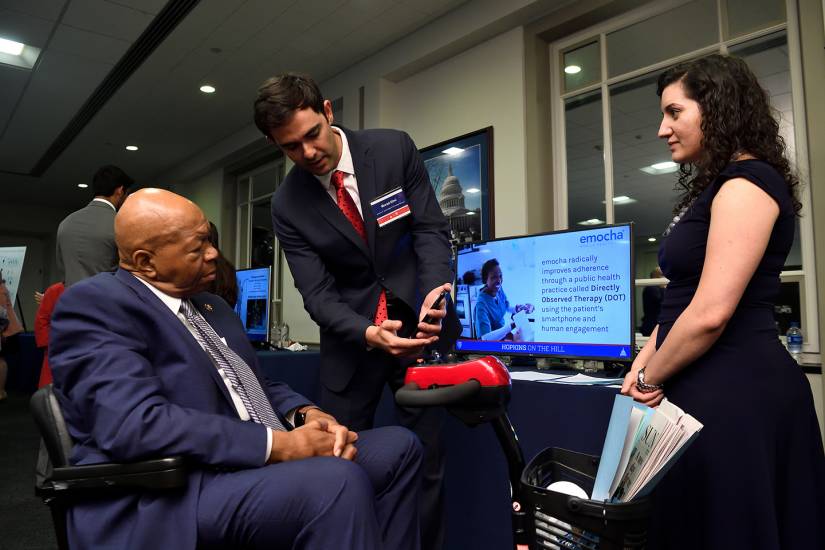 Image caption: U.S. Rep. Elijah Cummings (left) was a steadfast supporter of Johns Hopkins. Here, he attends a presentation of Hopkins research to Congressional staffers during the annual Hopkins on the Hill event in 2019.

During his years in service Cummings steadfastly supported Johns Hopkins' community work in Baltimore. The projects closest to his heart were those that supported the city's children, such as the Henderson-Hopkins School in East Baltimore and the Baltimore Scholars. Programs like the Baltimore Scholars "have the potential of going a long way in helping a frequently underserved population come closer to realizing their college dreams," Cummings wrote when the program launched in 2004.

The Baltimore Scholars Program and recently launched D.C. Scholars Program recognize the best and brightest students from the two communities with generous financial support. Eligible students from public schools and public charter schools receive full cost-of-attendance scholarships, including tuition, fees, and room and board, if their families earn less than $80,000 a year. For families that earn between $80,000 and $150,000, college expenses are capped at 10% of income.

The programs also include extensive enrichment opportunities through paid internships, peer and faculty mentoring, career networking, and connections with alumni.

Baltimore Scholars has to date been able to attract more than 200 of the city's brightest minds to the university's Homewood campus and the Peabody Institute. The first D.C. Scholars entered the university this fall.

"It's been a real privilege to work with the Baltimore Scholars Program as a faculty mentor. In addition to their many impressive academic achievements, the richness and diversity of experiences these students bring to the Hopkins community produces the energy that fuels our intellectual journey together," said political science Professor Adam Sheingate, a longtime faculty adviser to the program. "I look forward to working with students in the expanded Cummings Scholars Program in ways that forge stronger connections with our city so that all Hopkins students consider Baltimore home regardless of where they're from."

The name change stems from the ongoing work of Johns Hopkins' Diverse Names and Narratives Project, which aims to more visibly celebrate remarkable people with ties to the university, focusing on those from historically marginalized and underrepresented groups. The recommendation to honor Cummings, approved by the board of trustees of Johns Hopkins University, resulted from extensive deliberations by a cross-institutional task force of students, faculty, staff, alumni and community members.

Earlier this year Johns Hopkins announced the first program to be renamed after consideration from the Diverse Names and Narratives Project: the Gaston-Johansson Faculty of Excellence Program in honor of the university's first African American woman to become a tenured professor, Fannie Gaston-Johansson. Several facilities are also being renamed for trailblazing figures: the Scott-Bates Commons for Frederick Scott and Ernest Bates, the Undergraduate Teaching Laboratories for Florence Bascom, and the Johns Hopkins Outpatient Center in East Baltimore for Levi Watkins.

The renaming of the Cummings Scholars program will be celebrated with a special event for alumni and students in 2023. 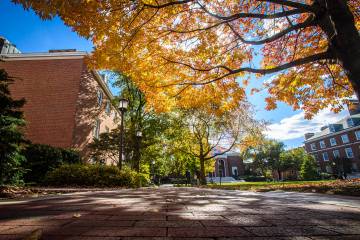 Published Feb 11, 2022
The D.C. Scholars Program will offer financial aid, other benefits to graduates of D.C. public schools and public charter schools beginning in the fall of 2022