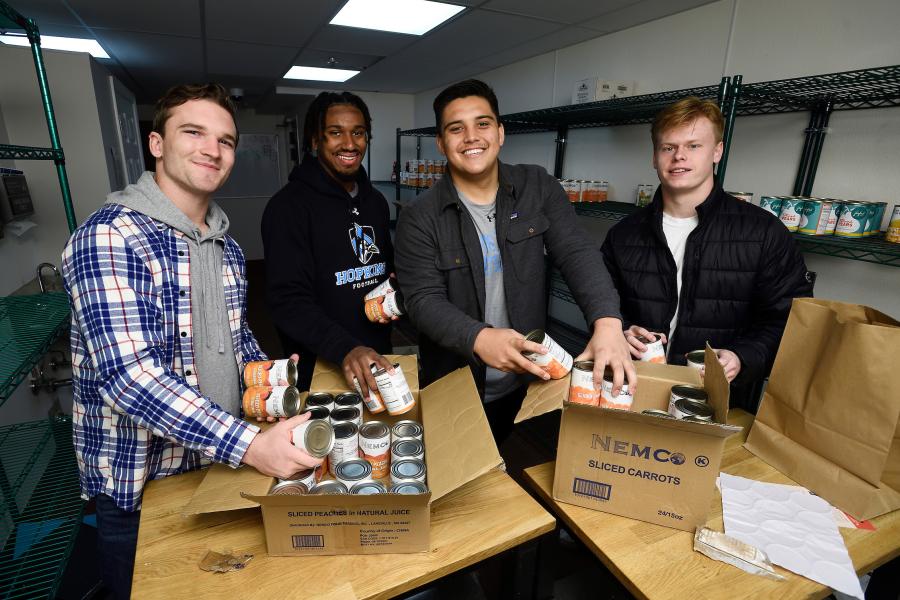 Graduate student Alan Gorny and more than 30 other members of the JHU football team have volunteered their time over the past nine months to help revitalize the food pantry, which has distributed nearly 13,000 pounds of food since March to help address food insecurity on the Homewood campus

The concept of a food pantry at Johns Hopkins began with students.

Originally developed and founded by alums Nemo Keller, WSE '16; Ivory Loh, KSAS '18; and Emma Zeng, KSAS '19, and funded by a grant to address food insecurity and reduce food waste on the Homewood campus, the initial, student-run iteration of a food pantry opened in spring 2018. However, when campus effectively shut down due to the COVID-19 pandemic in 2020 and 2021, the pantry became inoperable without student staffers, and what had become a vital resource for many members of the Hopkins community was lost for two years.

In March 2022, however, the concept was revitalized, and the Johns Hopkins Food Pantry opened its doors inside The LaB. Bolstered by a partnership with the Maryland Food Bank, the food pantry is now operated by the Office of Student Outreach and Support—situated within Student Affairs—providing more structure and ensuring consistent operation throughout the year.

The pantry, geared toward students but open to anyone with a JHED ID, currently has 559 registered shoppers and has distributed nearly 13,000 pounds of food since March. Student involvement remains vital to its success.

"Our staff oversees many of the high-level logistical operations" says Elizabeth Winberry, senior director of student outreach and support, including the registration component, student communication, ordering and managing food orders, and other high-level logistics. "But that still leaves the day-to-day matters of taking inventory, unpacking boxes, stocking and restocking shelves, and keeping the space clean, and with all we have going on in SOS, I knew we would need help."

Help would come, as it turns out, from the JHU football team.

Looking for volunteers to assist with all of those vital day-to-day matters, Winberry contacted Alan Gorny, an offensive lineman on the Hopkins football team, classically trained pianist, and recent Krieger School graduate currently pursuing a master's degree in health care management. Gorny, having worked with Winberry and SOS since his sophomore year, both signed on for the task and set out to recruit his fellow football players.

"It was a pretty small group of us at first, me and about six or seven other guys," Gorny says. "Once the summer came around, there were only two or three of us here, which was a little more difficult, but we got it done." 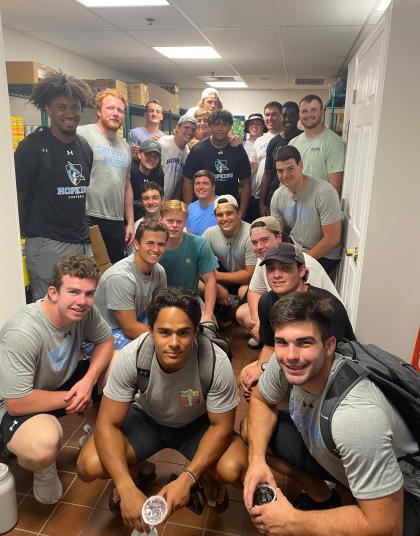 Image caption: Thirty-four members of the Hopkins football team have volunteered regularly at the food pantry this fall.

At the start of the 2022–23 school year, Gorny got back in touch with Winberry, and the two worked together to enlist more players. Now roughly half the football team is involved—34 players to be exact—rotating weekly and monthly duties and pitching in on the first Friday of every month, when deliveries arrive from the Maryland Food Bank.

This is not the first time Hopkins football has lent its time and energy to support a meaningful initiative—several players were involved in the unveiling of the new track and turf field at the Henderson-Hopkins school in East Baltimore.

"We got to know some of the kids, and they show up at some of our games, which is pretty cool," Gorny says with a smile. "We also have a partnership with Be the Match, which is a bone marrow drive. Every year, we set up multiple stands around campus and go around for the whole day recruiting people to sign up as bone marrow stem cell donors."

Gorny has been individually recognized for his service work as well. In September, he was named to the 2022 Allstate AFCA Good Works Team, an honor that celebrates collegiate football players who have made outstanding contributions to their communities both on and off campus.

This spirit of service is one that Gorny says pervades all of Hopkins Athletics, reinforced by the coaches and directors who guide them.

"Our late coach, Jim Margraff, who passed when I was a [first-year student], had in his office what's called the Hopkins Creed," Gorny says. "Basically, it was a list of values that we as a team aspire to uphold all the time. One that stuck out to me was, 'We are good citizens.' Our new coach, Greg Chimera, who worked under Margraff, demonstrates these values to us every single day, and the Creed still hangs up in our locker room."

Says Chimera: "Alan has done a tremendous job leading multiple efforts, including the food pantry, which is vital to many students. As a football team, we want to connect with different organizations across campus and in the Baltimore community to make a positive impact on others."

This sentiment is shared by Jen Baker, director of Athletics and Recreation:

"Within Athletics, we emphasize the importance of being of service to others—after all, life is a team sport," she says. "I am so proud of the leadership and selflessness our football players continue to demonstrate across campus. They don't hesitate to help their fellow students and our campus partners anytime they're asked to do so, and the example they set for others is admirable."

Beyond setting an example, student athletes taking part in initiatives such as the food pantry helps raise awareness that these initiatives exist.

"To be honest, I didn't even know about it until I was a senior," Gorny says. "I think it's important that people know we have resources on campus that aren't always talked about and that everyone can use, not just the food pantry but also mental health resources. It's helpful for us to spread the word."

Anyone interested in getting involved with the Johns Hopkins Food Pantry or in running a food drive should contact studentoutreach@jhu.edu. 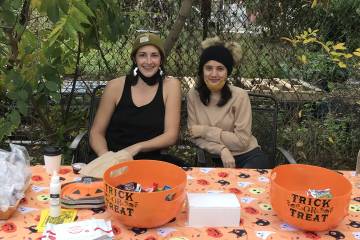 A fridge full of love