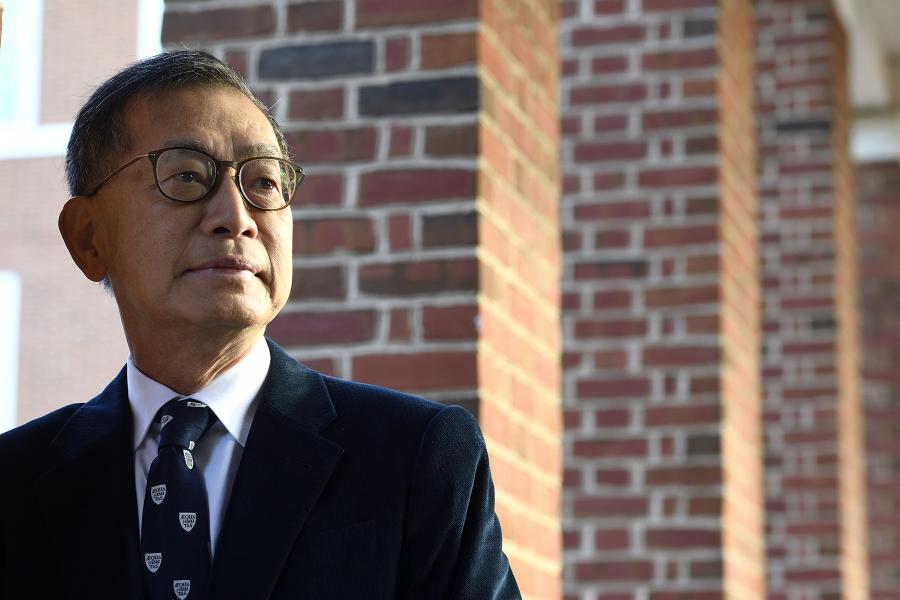 For celebrated cancer researcher Chi Van Dang, scientific director of the Ludwig Institute for Cancer Research, joining Johns Hopkins marks both the next chapter in his career as well as a homecoming.

"When I was first approached about returning to Johns Hopkins, I thought, 'Wouldn't it be great to come home?'" recalls Dang, who completed both his medical training and residency at Johns Hopkins, and later served on the faculty for more than two decades, during which time he helped establish new fields of cancer research. "This move gives me a blank slate to really draw whatever I want on it, and it is an incredible honor to be given this opportunity for creativity. Coming back to where I started my career as an assistant professor feels like being reborn and will certainly reinvigorate my research program. I am also very excited to once again contribute to the community."

Dang, a renowned cancer biologist and hematologist-oncologist, is returning to Johns Hopkins as a Bloomberg Distinguished Professor of Cancer Medicine and will hold primary appointments in the Department of Oncology in the School of Medicine and the Department of Biochemistry and Molecular Biology in the Bloomberg School of Public Health, as well as an appointment in the Sidney Kimmel Comprehensive Cancer Center. Dang is also the scientific director of the Ludwig Institute for Cancer Research where he oversees the organization's strategy to advance the prevention, diagnosis, and treatment of cancer through the organization's international network of research laboratories at prominent academic institutions.

Dang is best known for defining the function of the first cancer gene that is known to act as a switch, turning on metabolic pathways and mechanisms that are advantageous for cancer cells. The MYC gene produces a transcription factor, a protein that controls the expression of genes—like a switch that turns certain genes on or off to make them active or inactive. Dang showed that MYC alters the metabolic pathways in cancer cells, and tumor cells become addicted to certain nutrients. Disrupting these pathways could be a powerful approach for treating many types of cancer.

Dang likens the cancer cell to a broken car that has no brakes and whose accelerator is stuck.

"It bothers me that we have such great intellect in cancer research, and yet there are so many problems we have not been able to solve. When I get up in the morning, I have to think of something new to do to make a difference."
Chi Van Dang

This landmark finding from 1997 has since opened up the field of cancer metabolism. Now, Dang aims to exploit this knowledge for therapy by targeting the cancer cell metabolism. If the fuel sources that cancers become addicted to can be identified and cut off, or if drugs can block the cancer cells' ability to process the nutrients, this could be a practical way to kill cancer cells.

For Dang, the hope of clinical impact is a driving force behind his research, inspired by years of clinical work as an oncologist. Although he is no longer practicing medicine, his interactions with patients continue to inspire his research.

"I once treated a patient with aggressive large cell lymphoma," Dang remembers. "We caught it early and treated her, and she went into complete remission. It has been 17 years now, and every holiday season, I still get a card from her, and every year I look forward to it. The relationships you build with patients are very special, and they are a reminder that this research makes an incredible difference to patients, and all the people around them. It bothers me that we have such great intellect in cancer research, and yet there are so many problems we have not been able to solve. When I get up in the morning, I have to think of something new to do to make a difference."

Dang's recent work has begun to focus on how the circadian clock affects tumor biology, and how these clocks can be manipulated for therapeutic purposes. Just like our bodies have biological clocks that have daily sleep and wake cycles, all of our cells also have molecular clocks that control the behavior of the cells. These clocks regulate genes in a 24-hour cycle—certain genes get switched on during the day, off at night, and back on the next day, in precisely 24 hours.

"The circadian clock regulator orchestrates the genes, like the conductor of a symphony," Dang says. "If you genetically knock out the circadian clock in an animal, they age much faster, because everything goes awry if it is no longer synchronized. We found that when MYC is activated in some types of cancer cells, it actually destroys the clock—essentially, the cancer cells don't have to sleep. If tumor cells have no clock, they are always running, and because of this, they grow very rapidly. Our non-cancerous cells, on the other hand, have a clock that regulates their functions. We may be able to manipulate this and spare side effects by administering chemotherapy at the right time of day, when healthy cells are inactive and won't react to the chemotherapy, while cancer cells could still be killed off."

Meanwhile, there are other cancers that actually require the circadian clock in order to grow, and makes the cells resistant to therapy. Researchers are just starting to uncover the molecular mechanisms behind these processes, and why different types of cancers react in these opposite ways. Dang hopes that by finding a way to adjust the clock, cancer cells could be made more sensitive to therapy.

Dang feels this extensive leadership experience has led him to build an interdisciplinary framework for his research, which he also strives to encourage in his students and mentees.

"I try to stimulate people thinking in different fields and bringing together diverse teams with different specialties, having engineers think about biological problems and vice versa," says Dang. "My studies on circadian clocks depend heavily on collaborations with bioinformaticians to crunch large sets of data and reveal patterns that biologists then make sense of. The practice of bringing disciplines together allows us to follow questions that we believe are important to answer without being limited by the technology available in our lab. We can go to wherever that technology is, and collaborate with people who have the expertise and the willingness to help us answer these crucial questions and, ultimately, save lives."

"Chi Van Dang is continuously striving to innovate and push the boundaries of research," says Sunil Kumar, Johns Hopkins provost. "By looking for new interdisciplinary avenues to apply and extend his scholarship, he exemplifies the true spirit of the Bloomberg Distinguished Professorships program. We are excited for his return to Johns Hopkins."

"The practice of bringing disciplines together allows us to follow questions that we believe are important to answer without being limited by the technology available in our lab. We can go to wherever that technology is, and collaborate with people who have the expertise and the willingness to help us answer these crucial questions and, ultimately, save lives."
Chi Van Dang

"What a pleasure it is to welcome Dr. Dang back to Johns Hopkins," says Theodore DeWeese, interim dean of the Johns Hopkins University School of Medicine and interim CEO of Johns Hopkins Medicine. "Dr. Dang is an internationally recognized expert in cancer biology. The thought that his research program as well as his mentorship and guidance of others involved in cancer research makes his return to Hopkins particularly exciting. That Chi is returning to us as a Bloomberg Distinguished Professor is most appropriate because he naturally seeks to link people and programs across departments and divisions. That kind of collaboration will fuel the next wave of discoveries in the long fight against cancer."

"Dr. Dang is a groundbreaking researcher with a passion for problem-solving. He promises to be an extraordinary asset to the school's Department of Biochemistry and Molecular Biology," adds Ellen MacKenzie, dean of the Bloomberg School of Public Health. "As we work toward the next great discovery in understanding and preventing cancer, we are grateful to have his expertise, drive, and creativity at the Bloomberg School."

As a Bloomberg Distinguished Professor, Dang joins an interdisciplinary cohort of scholars working to address major world problems and teach the next generation. The program is backed by a gift from Michael R. Bloomberg, a Johns Hopkins alumnus, founder of Bloomberg LP and Bloomberg Philanthropies, World Health Organization Global Ambassador for Noncommunicable Diseases, United Nations Secretary-General's Special Envoy for Climate Ambition and Solutions, and 108th mayor of New York City.