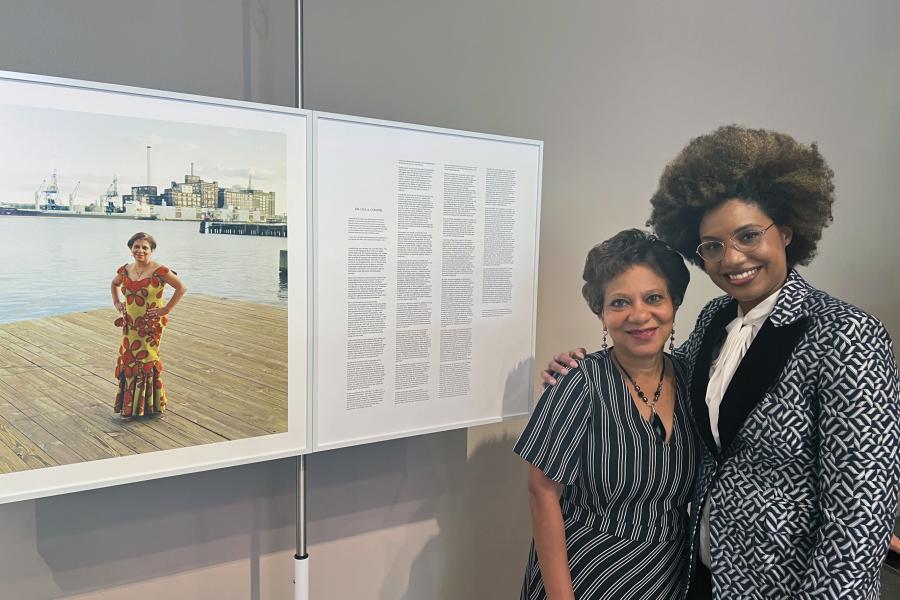 Award-winning photo series was inspired by the work of Johns Hopkins physician-researcher Lisa Cooper, her colleagues, and the community health workers who supported and served Baltimore neighborhoods during the pandemic

Lisa Cooper met LaToya Ruby Frazier in 2015 at The Contemporary, a nomadic, Baltimore-based non-collecting museum that engages audiences through subject-oriented projects and educational programming. During that dialogue on creative approaches to improve society, the Liberian-born physician-researcher and the artist from Braddock, Pennsylvania, realized they were working on similar problems, using approaches informed by their unique professional and lived experiences. And Frazier became inspired by Cooper's observation that her photographic installations could be valuable to health professionals and public health researchers working to advance health equity.

One of the nation's leading researchers on health disparities and the creator of interventions that empower patients from socially marginalized groups to take more active roles in their care, Cooper saw in Frazier's photography (including a series centered on Frazier's own family) the health implications of economic distress and social inequities. Frazier captured in the series, for example, her community's failed plight to save their local hospital from closure in 2011.

"Her art gives voice to people from marginalized groups in society who experience poor health as a result of that marginalization," says Cooper, a Bloomberg Distinguished Professor at Johns Hopkins who founded and leads the Center for Health Equity. "And I've used my expertise and platform as a physician and public health scientist to shed light on those same kinds of issues."

Cooper also noted the similarities between Frazier's artwork and "photovoice," a storytelling technique used by the public health field that places cameras in the hands of participants to document their daily lives.

"People seemed to understand the role of doctors and nurses in the pandemic, but not CHWs. They weren't heard, or seen as the heroes they are."
Lisa Cooper
Founder, Johns Hopkins Center for Health Equity

Cooper and Frazier, both MacArthur Fellows, crossed paths over the years as Frazier continued highlighting communities on the brink: families suffering through the Flint, Michigan water crisis, auto production workers laid off in Lordstown, Ohio, former coal mine workers in Belgium. When Frazier's mother faced a health crisis, their relationship took a more personal turn as Cooper navigated the family toward one of her colleagues in Pittsburgh.

During the COVID-19 pandemic, the two friends found their first opportunity to work collaboratively. Cooper pointed Frazier's attention to an unsung group in Baltimore: the community health workers who were on the ground helping residents with critical resources and information about preventing the spread of coronavirus. "I didn't think their stories were getting told enough," Cooper says. "People seemed to understand the role of doctors and nurses in the pandemic, but not CHWs. They weren't heard, or seen as the heroes they are."

For Cooper and her colleagues, these workers—trained citizens who bridge the gap between health care systems and local communities—had become essential in gaining trust at the neighbor-to-neighbor level, especially when it came to increasing the uptake of life-saving vaccines when they became available in 2021. 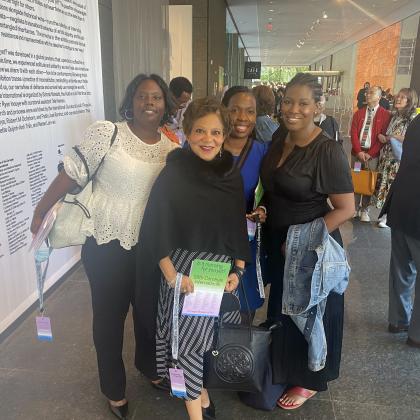 Cooper invited Frazier to Baltimore that summer, connecting her with her mentees, Chidinma Ibe, assistant professor at the Johns Hopkins School of Medicine, and Anika Hines, assistant professor at Virginia Commonwealth University/Medical College of Virginia; and Debra Hickman, a reverend and president of STAR (Sisters Together and Reaching) and co-chair of the Johns Hopkins Center for Health Equity's Community Advisory Board. Ibe then invited Tiffany Scott, chair of the Maryland Community Health Worker Association, to join the collaboration, and Scott facilitated introductions to CHWs. Frazier spent three months interviewing and photographing CHWs at work throughout the city, while Cooper and her colleagues—led by Ibe—conducted their own study with many of the same CHWs, incorporating the photovoice technique.

The result of this collaboration is now on display in More Than Conquerors: A Monument for Community Health Workers of Baltimore, Maryland 2021–2022, an exhibit at the Carnegie Museum of Art in Pittsburgh. It's part of the 58th Carnegie International, the longest-running North American exhibition of international art, where Frazier took home the top honor, The Carnegie Prize. Past winners of the esteemed prize include the likes of Pablo Picasso, Alexander Calder, and Henri Matisse.

Frazier's exhibit is arranged as 20 modified medical IV poles, each 9 feet tall and distanced by 6 feet—the "social distancing" measurement recommended at the start of the pandemic. Each pole is double-sided, with photographs and texts of and by Baltimore community health workers.

"As each CHW spoke, it was evident and clear that this was an invisible workforce that desired to be seen and heard, that deserved to have their labor, care, advocacy, and mutual aid made visible and tangible on a monumental scale," Frazier said in an interview.

On display at the Carnegie Museum through April 2, the exhibit also showcases health equity researchers from Johns Hopkins, including Cooper and Ibe, as well as the work of Hickman, whose organization has employed CHWs for decades, and Hines, an alumna of Johns Hopkins. Cooper's latest book, Why Are Health Disparities Everyone's Problem? (JHU Press, 2021) is available at the museum's gift shop.

Leaders in health disparities research here are looking to community health workers to play a game-changing role in improving health among those living in racially minoritized communities.

More Than Conquerors, a traveling exhibit, will eventually arrive in Baltimore, according to Cooper. Meanwhile, her team at Hopkins is preparing to publish the results of their study, called "Amplifying the Lived Experiences of Community Health Workers," in the spring. Frazier's work will be displayed at the National Portrait Gallery as part of the Smithsonian's new "Kinship" exhibition.

"It's incredibly powerful, seeing our stories and photos presented across the room together," says Cooper, who attended the exhibition's Sept. 24 opening gala in Pittsburgh. "And that after all these years, LaToya and I finally got a chance to work together, with the rest of our collaborators, to elevate community health workers, who have long been unsung heroes, but through this installation, are voices of victory of the pandemic and of health equity."