The award is accompanied by $875,000 over five years in flexible funding to explore new frontiers in their fields of study

By Sarah Tarney and Rebecca Shillenn

Astronomer Danielle Speller and biomedical engineer Justus Kebschull have each been awarded a 2022 Packard Fellowship for Science and Engineering, a prestigious early-career award for scientists that provides "flexible funding and the freedom to take risks and explore new frontiers in their fields of study." Each recipient receives $875,000 over five years.

Since its founding, the David and Lucile Packard Foundation has awarded fellowships to 16 scientists and engineers (including this year's honorees) affiliated with Johns Hopkins. 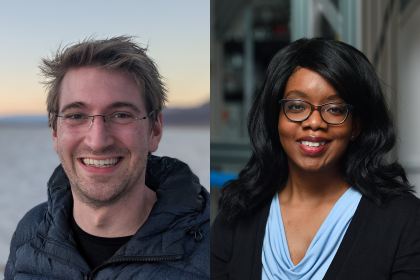 Mapping the evolution of the brain

The brain is arguably the most complex organ in many species. Justus Kebschull, assistant professor of biomedical engineering, is trying to understand how that vital organ changed and evolved over time.

His lab is engineering novel techniques to map connections and gene expression at high-resolution in a broad range of vertebrate species, ranging from mammals to birds and amphibians. He then compares the resulting maps to understand how the vertebrate brain was constructed over time, and if there are any organizing principles that shed light on why each species' brain is shaped the way it is.

"The question we want to answer is 'How do you build a complex brain? How do you start with a simple circuit, and add to it to support more complex behaviors?'" said Kebschull. "We also use the same tools we develop for our evolutionary work to compare the brains of animals during different stages of disease to understand how brain structure changes over these short time scales. For example, in rodents, we look at what happens to brain structure during long-term opioid use to help understand how those changes may lead to relapse."

Kebschull explains that understanding the differences between human and animal brains can provide the foundation for translational research, where treatments in animal models could eventually lead to cures for human disease.

"Support from the Packard foundation is invaluable at this early stage in my career," said Kebschull. "It allows us to follow bold ideas and more unconventional approaches without the constraint of more traditional funding bodies."

Ed Schlesinger, dean of the Whiting School of Engineering, said "Packard Fellowships recognize creativity and innovation, both of which Justus's research exemplifies. His work in evolutionary biology seeks not only to understand how the brain works at a molecular level, but also holds promise for better treatment for neurological diseases. It is tremendously exciting to see his work acknowledged in this way."

A matter of mass

Most of us know that our universe is made of matter, and that matter has mass. But scientists still don't understand everything about mass. Especially why some particles have smaller mass than others, or why some of their behavior doesn't follow the standard rules. More than 80% of the mass in our universe appears to be "dark matter" that's invisible to us. Johns Hopkins astrophysicist Danielle Speller is working to better understand these mysteries about the nature of matter and mass.

Current searches for physics beyond the Standard Model combine advanced instrumentation and quantum sensing techniques with nuclear and particle astrophysics, seeking answers that will offer new insight into fundamental physics and cosmology, says Speller, who is an assistant professor in the Krieger School of Arts and Sciences William H. Miller III Department of Physics and Astronomy. Her lab uses low-energy, cryogenic detection techniques to hunt for new particles that could be the constituents of dark matter and for rare types of radioactive decay. Currently, she's looking for a class of dark matter candidates known as axions in hopes of studying how they behave. She's also looking for a rare nuclear process called neutrinoless double-beta decay.

Each step Speller takes toward detecting evidence of either of these could reveal new pieces in the physics puzzle. "Each clue gives us a better idea of the most promising places to look for the next one," she says.

Speller works on these problems with two top experimental nuclear and particle physics projects. The Haloscope at Yale Sensitive to Axion Cold Dark Matter (HAYSTAC) is a cutting-edge experiment looking for axions. The Cryogenic Underground Observatory for Rare Events (CUORE) in Assergi, Italy, is one of the leading searches for neutrinoless double-beta decay.

"Professor Speller's research has the potential to bring our understanding of dark matter forward by leaps and bounds," said Christopher S. Celenza, dean of the Krieger School of Arts and Sciences. "The Packard Fellowship could not be more appropriate or welcome for someone so poised to bring new discoveries to light."

The Packard fellowship is known for opening doors to high-risk, high-reward investigations. It will allow Speller to pursue promising but unconventional leads in her research, possibly leading to unexpected discoveries.

"I'm very excited about the opportunity that this presents for us to explore new avenues of detection," Speller says. "I look forward to seeing what we can uncover." 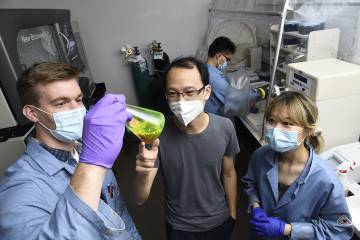 Published Oct 14, 2021
Xiongyi Huang, an assistant professor in the Department of Chemistry, works to bridge the worlds of biology and synthetic chemistry to develop new, affordable, and sustainable processes for chemical synthesis and drug development 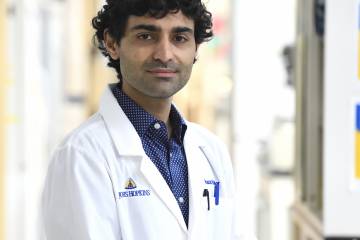 Published Oct 15, 2020
Reza Kalhor, an assistant professor in the Department of Biomedical Engineering, edits the genetic code to enable cells to record their own growth—a key to unlocking the origins of developmental abnormalities