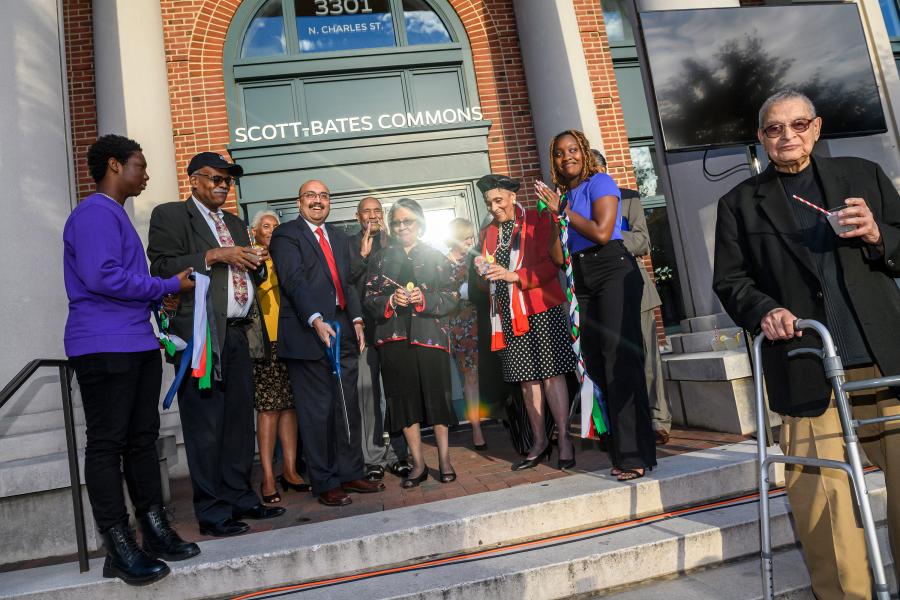 In 1950, Scott became the first Black student to earn a bachelor's degree from Johns Hopkins University; his legacy and those who carry it on have been a source of inspiration for underrepresented minority students at the university over the years

Johns Hopkins University celebrated a pioneering figure from its past on Saturday, Sept. 24, officially renaming a Homewood campus building that is home to hundreds of Hopkins undergraduates in honor of Frederick Scott, the first Black student to receive a JHU bachelor's degree.

On a beautiful, sunny fall afternoon, more than 120 people—including more than 40 members of Scott's family—gathered for the dedication of Scott Tower, one of two residential towers that make up Scott-Bates Commons, formerly known as Charles Commons, along Charles Street.

"Fred Scott was influential simply by graduating. For countless Black students coming behind him, his graduation confirmed that one could compete and be successful in this environment."
John Guess
1971 Johns Hopkins graduate

The name changes are part of the work of the Diverse Names and Narratives Project, an ongoing effort at the university to more visibly honor and celebrate remarkable people from the institution's history, with a specific focus on those from historically marginalized and underrepresented groups. The adjacent tower is named in honor of 1958 Hopkins graduate Ernest Bates, trustee emeritus and an acclaimed neurosurgeon and entrepreneur who became the first Black student at JHU's School of Arts and Sciences when he enrolled in 1954.

Scott was the university's first Black undergraduate student, enrolling in the School of Engineering in 1945 and graduating in 1950 with a degree in chemical engineering; he went on to a career as an engineer and editor before his death in 2017 at 89. In a 2004 interview, Scott recalled being told, after asking whether the university admitted Black students, "'I don't know—we haven't had anyone apply." In that same interview, Scott was asked what he believed he brought to the university. His answer? "A broad-based capability to contribute a whole person in this academic setting."

"To bring one's whole person can be a difficult task even today, let alone in 1945," JHU President Ron Daniels said in prerecorded remarks played during the dedication ceremony. "In doing so, Frederick challenged and helped to change the norms that prevented so many other people of diverse backgrounds from being welcomed as equal members of our university community and supported, fully, by their alma mater in their journey through Johns Hopkins and beyond." 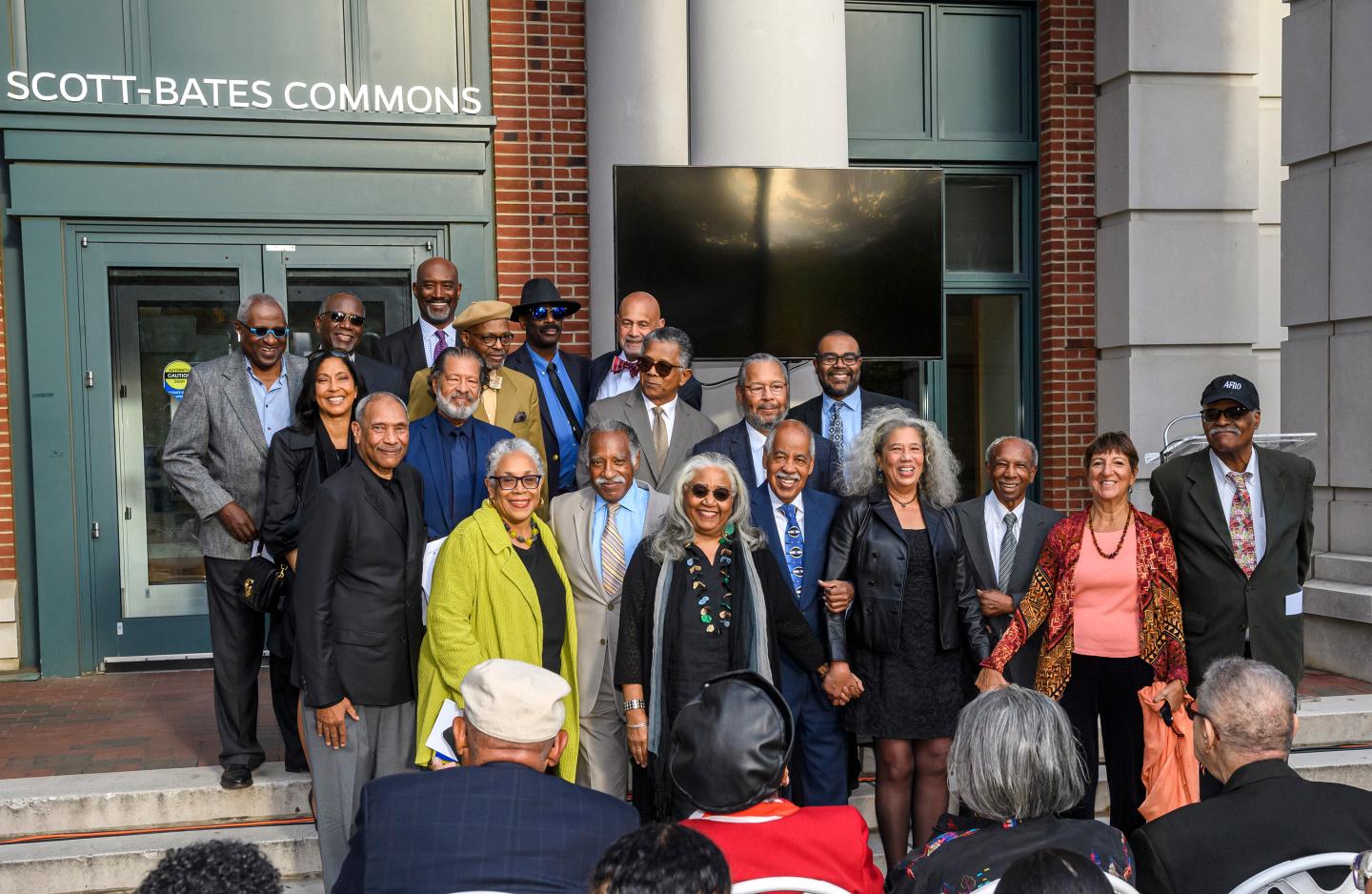 Image caption: Members of the Fred Scott Brigade, a group of Johns Hopkins alumni from the 1970s who have provided support and mentorship to generations of Black students at Hopkins over the years, pose for a photograph during a dedication ceremony for Scott Tower, named in honor of Frederick Scott, the university's first Black undergraduate student.

Among the attendees at the event were David and Norma Scott, Frederick Scott's brother and sister-in-law; Patricia and James Waddy, Scott's sister and brother-in-law, along with more than two dozen other members of Fred Scott's extended family, and nearly 20 members of the Fred Scott Brigade, a group of Black alumni from the 1970s who have sustained Scott's legacy by providing mentorship to generations of Black students and alumni at JHU. The Brigade was the university's first Black alumni group and has proven instrumental in illuminating the experiences of underrepresented minority students at Johns Hopkins over the years.

"Fred Scott was influential simply by graduating," said John Guess, a 1971 JHU graduate, co-founder of the Black Student Union at Hopkins, and member of the Brigade. "For countless Black students coming behind him, his graduation confirmed that one could compete and be successful in this environment. He was the Black quarterback whose mental capability was constantly questioned but whose accomplishments belied the stereotype."

Other speakers at the event included Katrina Caldwell, the university's chief diversity officer and vice provost for diversity and inclusion; and JHU Provost Sunil Kumar.

"Generations of Hopkins students will make their homes in these towers, shaping and bringing to life their future ambitions," Kumar said. "I have a feeling Frederick would have advised them with the words quoted on our program: 'Don't let anything stop you!'" 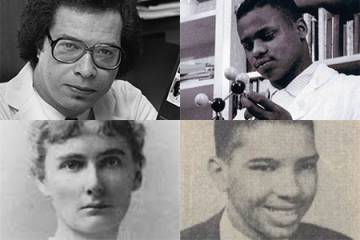 Hopkins to honor four pioneering figures from its history

Published Oct 29, 2021
Campus buildings, facilities to be named for Ernest Bates, Florence Bascom, Frederick Scott, and Levi Watkins in recognition of their achievements and contributions to the university 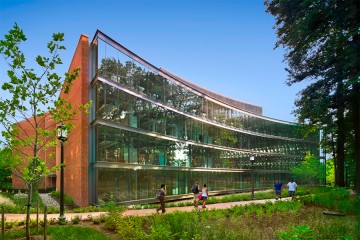 Published April 30, 2021
The Diverse Names and Narratives project will focus specifically on recognizing individuals from historically marginalized and underrepresented groups and elevating their stories