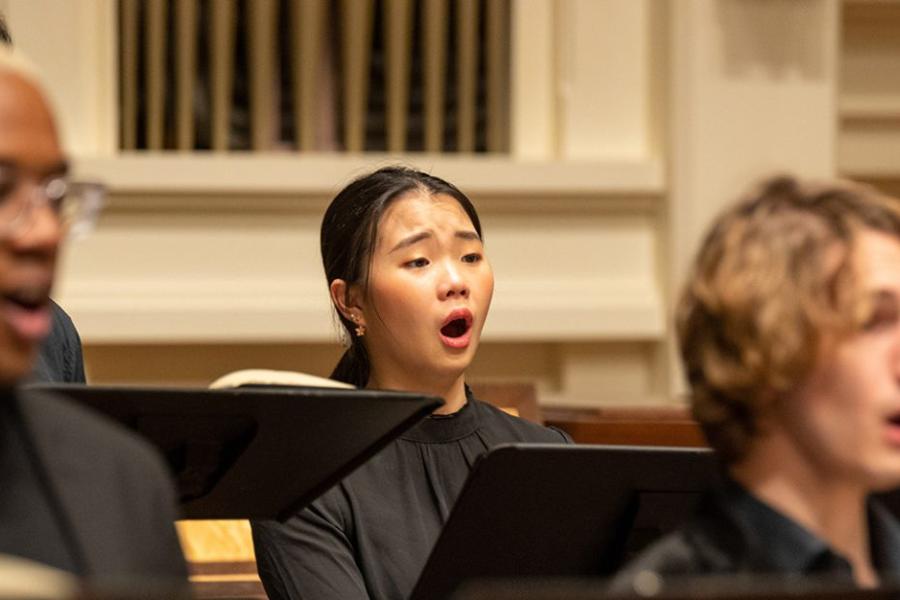 For the first time since fall 2019, the Peabody Institute is staging a full concert season, promising a year of exceptional performances and welcoming in-person audiences back to venues across Baltimore. Many of the events that are scheduled to take place on Peabody's campus will also offer a livestream option to be enjoyed by audiences at home.

With the new season comes the debut of the Peabody Hopkins Conservatory Choir, created to expand Peabody's connection to the greater Baltimore community. The choir, led by associate professor and director of choral studies Beth Willer, is comprised of undergraduate and graduate students, faculty, and staff, as well as community members from Greater Baltimore.

"I am thrilled to launch this unprecedented ensemble connecting Peabody and students, faculty, and staff with the Greater Baltimore community, delivering a dynamic program that speaks to a 21st century audience," Willer says. "In future years, my hope is that this work will not only artistically enrich those joining us as singers, but also those who join us as listeners and artistic collaborators from across Baltimore. The possibilities are great."

The debut concert on Dec. 7 will feature a repertoire of pieces ranging from the 17th century to the 21st century, including works from Pulitzer Prize– and Grammy Award–winning artists. The spring concert on April 15, 2023, will again feature works spanning generations, including Wolfgang Amadeus Mozart's Requiem.

Other events to look forward to include the Sylvia Adalman Chamber series, which highlights faculty performances in an exciting and wide-ranging showcase, visits from a variety of guest artists, as well as two mainstage operas—Jules Massenet's Cendrillon in the fall and Mozart's Don Giovanni in the spring—and a Peabody Symphony Orchestra performance in May highlighting the works of Pulitzer Prize-winning faculty composer Du Yun to round out the year.

More information about these and additional events can be found on the Peabody events website.