During a media briefing Wednesday, experts share insights about how monkeypox spreads, how to avoid the virus, and what vaccine strategies are most effective 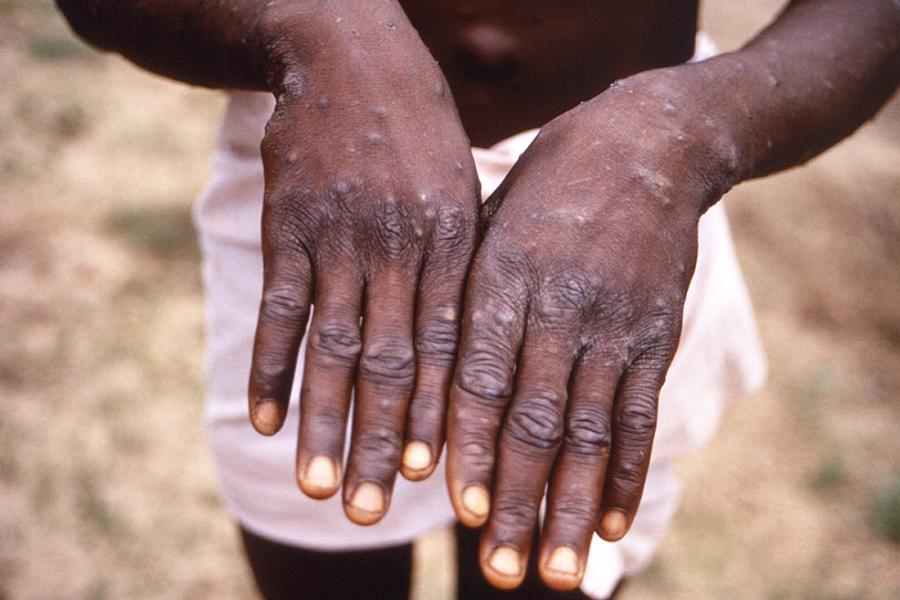 Image caption: During an outbreak of monkeypox in the Democratic Republic of the Congo, a young man shows his hands, which have the characteristic rash of monkeypox during the recuperative stage.

Johns Hopkins University experts in health care, epidemiology, and harm reduction convened Wednesday to share their insights on the global monkeypox outbreak, which has infected 31,000 people in 90 countries around the world, including more than 9,000 cases confirmed in the U.S. The experts discussed monkeypox symptoms, transmission, treatment, and the availability of vaccines.

There are many lessons to be learned from the COVID-19 pandemic, these experts agreed, but it is also vital to understand how monkeypox differs from SARS-CoV-2 and from other members of the poxvirus family.

Most cases of monkeypox are spread through close contact, usually skin-to-skin, with an infected person. While there has been evidence of monkeypox virus spreading via droplets expelled from the mouth and nose—say, during a sneeze—there is little to suggest that this is a primary form of transmission for the disease, said Amesh Adalja, a senior scholar at the Johns Hopkins Center for Health Security and an adjunct assistant professor at the Bloomberg School of Public Health.

"It's not very efficient at spreading outside of very close contact with people,"Adalja said. "Just because there are multiple mechanisms for a virus to get from person to person doesn't mean it's using all of them. And when you're thinking about control, when you're thinking about understanding the epidemiology, it's really important to focus on what is … driving the transmission."

It also remains unclear, Adalja said, whether the virus can be transmitted through the exchange of sexual fluids. A 2017 outbreak of monkeypox in Nigeria appeared to primarily affect people with multiple sex partners, and the lesions that characterize the disease appeared in the genital areas of those who became infected, but researchers can't say whether that outbreak spread as a result of the exchange of sexual fluids or close skin-to-skin contact. 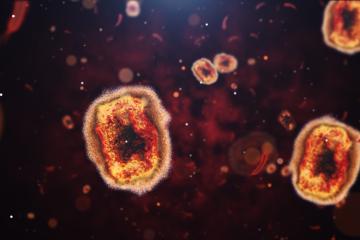 How concerned do we need to be about monkeypox?

Has the COVID-19 pandemic given the U.S. a roadmap for doing a better job managing monkeypox, or have we been caught on our heels once again?

There are a number of simple ways to reduce the risk of transmitting monkeypox, said Noreen A. Hynes, an associate professor at the School of Medicine and the Bloomberg School of Public Health and associate medical director and director of research for the BioContainment Unit at The Johns Hopkins Hospital. Nonpharmaceutical interventions include limiting time spent in shared, enclosed spaces to four hours; limiting your number of sexual partners; and using barriers such as latex condoms or dental dams when engaging in sexual activity with partners who may have been exposed to the disease. Pharmaceutical interventions include antivirals—although the use of antivirals in the U.S. has been low because the strain circulating here is mild—and vaccines.

There is currently a high-profile shortage of monkeypox vaccines in the U.S., which came on the heels of a significant federal stockpile of the vaccine expiring. William Moss, a professor at the Bloomberg School of Public Health and executive director of the International Vaccine Access Center, said the U.S. is currently distributing approximately 1.1 million doses of vaccine, but some experts suggest at least 3.5 million doses are necessary to contain the outbreak. There is a cache of monkeypox vaccine that is being stored in bulk, and the U.S. government is seeking to contract with a pharmaceutical company to portion out that vaccine into vials that can be distributed to at-risk communities, Moss said. There are also vaccine deliveries scheduled for this fall and next year that will help the U.S. reach its targeted 5 million doses.

Strategies proposed during the pandemic to stretch the supply of COVID-19 vaccine, such as delaying second doses or delivering only single doses of a two-dose regimen, are being explored in some jurisdictions where the risk of exposure to monkeypox is high. But Moss warned that the evidence appears to show that much of the desired immune response comes two weeks after the second dose, so delaying or forgoing the second dose of monkeypox vaccine may leave individuals vulnerable to contracting the disease.

Perhaps the most promising strategy to stretch a low supply of vaccine is to administer the doses intradermally, or between the layers of the skin, rather than subcutaneously. There is evidence, Moss said, that this strategy requires a smaller dose of vaccine but may produce the same immune response, given the abundance of immune-reactive cells in the dermis. There is also a long history of this type of vaccine delivery in the U.S., as well as adapter needles that can help physicians and pharmacists deliver the vaccine effectively.

Can the spread of monkeypox be stopped?

Still, the most important component of the U.S. response to the monkeypox outbreak is to share accurate but not inflammatory information. The open question about the sexual transmission of the virus, paired with the fact that 94% of cases in the U.S. have occurred among men who reported having sexual contact with other men, has led to the disease becoming stigmatized, said Jason E. Farley, endowed professor of nursing at the Johns Hopkins School of Nursing and director of the Center for Infectious Disease and Nursing Innovation. There's an important but nuanced line to walk between warning vulnerable communities about their potential for exposure and introducing harmful stigmas that affect those communities, he said.

He described as an example a patient he treated who is gay but who has not shared his sexual orientation with his employer or all the members of his family. This patient's monkeypox infection was quickly identified and diagnosed, and early treatment reduced the development of his lesions. But his diagnosis also required contact tracing among his friends, family, coworkers, and sexual partners, and he feared being outed and stigmatized for his sexual orientation. Similarly, a recommended isolation period caused the patient to fear losing his job.

It is essential, Farley said, that this community of people receive information on monkeypox prevention and treatment that is sex-positive and non-stigmatizing. Marginalizing this community of at-risk individuals, he said, hearkens back to the AIDS crisis in the 1980s in the U.S. and "fuels the dehumanization of a community who are fundamentally pro-science, pro-harm reduction, pro-vaccine, and asking—pleading, in all honesty—for access to prevention and care services."

How concerned do we need to be about monkeypox?

Published Aug 5, 2022
Johns Hopkins experts weigh in on whether the U.S. is ready for the possibility of twin pandemics