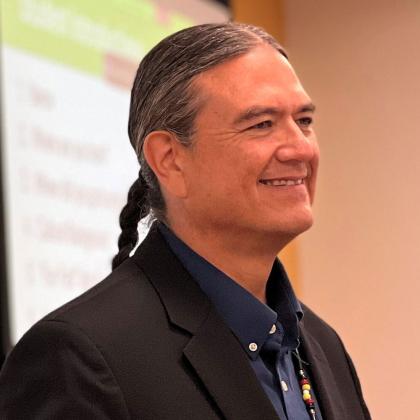 Warne's work at the Bloomberg School will build on his experience as a trustee, committee member, and adviser to leading national public health agencies, including the National Institutes of Health, Centers for Disease Control and Prevention, Indian Health Service, American Cancer Society, American Medical Association, as well as numerous rural and urban Indigenous-focused organizations. Warne has also provided high-level testimony to Congress, including The State of Nutrition in America 2021 in November 2021.

"It is an honor to welcome one of the world's preeminent scholars of Indigenous health to Johns Hopkins," says Bloomberg School Dean Ellen J. MacKenzie. "Dr. Warne has an extraordinary depth of expertise in effecting policy change and a passionate dedication to promoting health equity for Indigenous peoples. His work with our School and our University will have a far-reaching and powerful impact on the well-being of tribal communities."

"While the U.S. health system is primarily focused on individual health, we must be guided by Indigenous teachings to improve the health of the collective."
Donald Warne
Co-director, Center for American Indian Health

Founded in 1991, the Johns Hopkins Center for American Indian Health works in partnership with communities to advance Indigenous well-being and health leadership. The center is based in the Bloomberg School's Department of International Health. With programs spanning behavioral health, mental health, infectious disease prevention, and robust graduate training and faculty development initiatives, the center has worked with more than 200 tribal communities across the U.S. and maintains site hubs with tribal communities in Arizona, Michigan, Minnesota, and New Mexico, as well as administrative offices in Albuquerque and Baltimore. Warne will be based in Baltimore.

Warne will join Melissa Walls, who is a first-generation descendant of the Couchiching First Nation and Bois Forte Band of Ojibwe, as co-director of the Center for American Indian Health. Allison Barlow, who has been with the center since its founding by Mathu Santosham in 1991, will remain the center's executive director.

"Our center is humbled and inspired to welcome Dr. Warne to our leadership, alongside Dr. Melissa Walls," Barlow says. "Dr. Warne will expand our capacity to support the best in Indigenous public health education, research, practice, and policy, led by Indigenous ways of knowing."

Adds Walls: "I am thrilled to work more closely with Dr. Warne in his new leadership positions at the University and within our Center. His vision and drive, rooted in Indigenous wisdom and values, will propel our work to make systemic change to improve the health of our relatives across North America."

Warne's career is informed by rich work and life experiences. He served the Pima Indian population in Arizona as a primary care physician and later worked as a staff clinician with the NIH. He has also served as Health Policy Research director for the Inter-Tribal Council of Arizona, executive director of the Great Plains Tribal Chairmen's Health Board, and faculty member at the Indian Legal Program of the Sandra Day O'Connor College of Law at Arizona State University.

"I am looking forward to joining the Johns Hopkins Bloomberg School of Public Health to ensure we can be increasingly guided by Indigenous teachings to improve the health of the collective," Warne says. "Indigenous knowledge will be integrated into an array of new doctoral-level courses, advancing the next generation of public health leaders and continuing to build capacity across Indian Country. These public health advocates, in lockstep with our center and the university, will ensure science-based policy at all levels is advancing Indigenous health and well-being."

"The past two years have been a significant challenge for Indigenous peoples, who experienced the highest COVID mortality rates of any U.S. population, but we have demonstrated great resilience," Warne says. "While the U.S. health system is primarily focused on individual health, we must be guided by Indigenous teachings to improve the health of the collective."