In the new book 'A Scientific Revolution,' the authors make the case of how 10 men and women pioneered health care as we know it

The characters profiled in A Scientific Revolution: Ten Men and Women Who Reinvented American Medicine (Pegasus Books, 2022) by Ralph H. Hruban, Med '85, and Will Linder, A&S '72, sure would make for one fascinating fantasy dinner party. There's the no-BS woman who helped stir the Johns Hopkins School of Medicine to life, the white men who cemented its reputation, and the Black technician who worked patiently—and in relative obscurity—for decades alongside one of its groundbreaking surgeons.

The authors kick off their profiles of 10 of the school's iconoclasts with the indomitable Mary Elizabeth Garrett, a railroad heiress and feminist philanthropist who convinced Johns Hopkins leadership to admit women to its new School of Medicine as a condition of her donating the necessary funding for it to open in 1893. 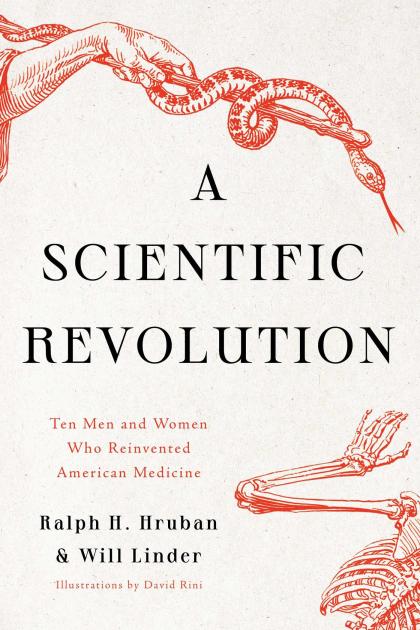 Four of the next concise but richly detailed portraits bring to life the innovative and risk-taking physicians who flourished during the school's early days. We have William Henry Welch, its first dean, and William Osler, who brought students into patient wards and published the field's definitive medical textbook (The Principles and Practice of Medicine). A pair of derrring-doers, the surgeon William Stewart Halsted (who once jabbed a syringe into himself to perform an impromptu blood transfusion) and Jesse William Lazear (whose explorations of infectious diseases included an ultimately deadly exposure to yellow fever-infected mosquitoes) completes this quartet of willful Williams.

Two other nonmedical personalities flesh out the development of the school. The multitalented Civil War veteran John Shaw Billings combined his affinity for what today might be referred to as information management and environmental design to bring light, air, and organization into Hopkins' medical facilities. The German-born Max Brödel revolutionized the art of anatomical illustration. In a nod to that legacy, David Rini, a professor in the Department of Art as Applied to Medicine, for which Brödel served as the first director, drew the expressive character portraits that open each chapter.

Dorothy Reed Mendenhall, who identified the cellular components of Hodgkin lymphoma, surmounted a life beset by tragedy. As a 6-year-old, she experienced the sudden death of her father; as a young married woman she endured the deaths of her first two children. Her battle against sexism started early, too: on her first day of medical school, Osler sidled up to her and hissed "go home." Helen Taussig and Vivien Thomas, a white female doctor and a Black male surgical technician, also fell prey to the era's sexism and racism and were routinely overshadowed by the pioneering heart surgeon who performed the lifesaving blue baby surgery they had conceived of and perfected. Still, they persisted. And that, suggest the authors, is the heart of science and the heart of Hopkins.

For more information on the book and its central figures, we reached out to author and alum Ralph Hruban, a professor of pathology and oncology, who, in the early days of the pandemic, delivered a series of virtual talks highlighting some of the pivotal figures in the history of the Johns Hopkins School of Medicine.

How did you and your co-author Will Linder come together and what were your roles in writing the book?

Will was sitting in on the lectures and reached out to me later about expanding them into a book. It was a wonderful match. I love the 50,000-foot view and telling stories, and Will is a skilled writer with an eye for evocative detail. We started with the standard texts on our subjects then accessed several online archives. I also spent a lot of time at [Hopkins'] Chesney Archives. We came across some real eye-openers, like the original manuscript for Vivien Thomas' autobiography. We compared it line for line with the published version, which effectively put to rest the suspicions that some had about whether a Black man with no college education could have written the book himself.

Besides your affiliations, what drove you to focus on Hopkins?

There was an inflection point in the history of medicine in the United States that starts with the opening of Hopkins' School of Medicine and continues through 1910 with the release of the Flexner Report. That report basically said that American medical education was a mess, and everyone was doing it wrong except Hopkins. It resulted in the closing of the fee-for-service medical schools and commitments to invest in schools modeled on Hopkins.

Some of the figures you profile are famous, some not. What were your criteria for inclusion?

Mostly, we were looking for narrative arcs. Florence Sabin [the first woman to hold a professorship at the School of Medicine] deserved the full treatment, but her story wasn't as compelling, so we just touch upon her here and there. Then there's someone like Billings, who's kind of underappreciated. What an amazing career he had. I love that his idea for a punch card system ended up as the foundation for a company that later became IBM!

Did anyone emerge as a personal favorite?

My admiration for Taussig kept growing. I love the anecdote about her trainees commissioning a portrait from Jamie Wyeth on her retirement. He met her in Cape Cod, he had dinner with her and walked on the beach with her, and he was so impressed by her forthright stare and how she didn't care about her appearance. Well, people cried when the painting was unveiled, and after she died, they asked the school to burn it. Will and I both love her and the painting.

Can you recall any surprises or uncomfortable truths that you discovered?

The new scholarship about Osler's racial prejudices is certainly disappointing. But I think his comments just reveal that we're all human and that even someone so well regarded can have their own unconscious biases. The writing process for me revealed some of my own biases. For example, the implicit sexism in a line from Reed's principal biographer didn't even occur to me as perpetuating gender stereotypes until my wife pointed it out! [The passage, from an article written in 2003, characterizes Reed's affair with a rising star in the Pathology Department this way: "She gave him her heart, and in return he gave her international fame."]