Events kick off Thursday with a game night hosted by the Black Faculty and Staff Association; Juneteenth will be officially observed with a university closure on Monday, June 20

On Sunday, the United States will observe Juneteenth, a new federal holiday recognizing the date in 1865 when Texas residents—including roughly 250,000 enslaved people—learned that all enslaved people had been freed.

Although the Emancipation Proclamation went into effect January 1, 1863, and declared all enslaved people to be freed, the news did not reach Texas until two and a half years later, when, on June 19, Major General Gordon Granger arrived in Galveston to deliver the news. Celebrations have evolved over the years and often include not only festivities but also educational activities promoting the preservation of Black culture. President Joe Biden signed the Juneteenth National Independence Day Act last year establishing Juneteenth as a federal holiday. At Johns Hopkins, the holiday will be observed on Monday, June 20.

But members of the Johns Hopkins community will be invited to participate in celebrations beginning on Thursday and taking place across the university in honor of Juneteenth, including a variety of events hosted by the Black Faculty and Staff Association this weekend.

A variety of Juneteenth events will take place Friday, beginning with the event Juneteenth at Homewood: Expressions of Freedom, hosted by the Billie Holiday Center for Liberation Arts. The center's Living History Fellow, Elder Charles Dugger, will lead a libation ritual and render a theatrical retelling of the first Juneteenth, which will be followed by musical and spoken word performances and a keynote address.

Also Friday, the Bloomberg School of Public Health will host a Juneteenth event featuring poet and artist Sonya Renee Taylor, founder and radical executive officer of The Body is Not An Apology. Taylor, an activist and award-winning performance poet will discuss radical self-love and body empowerment as a tool for social justice and transformation. Friday's Juneteenth events will also include a virtual conversation on emancipation and heritage with the Carey Business School Black Alumni Network and the Carey community.

The newest class of honorees for the Indispensable Role of Blacks at Johns Hopkins, a project celebrating Black students, faculty, and staff who have made lasting contributions to the university, will be inducted at a ceremony at 2 p.m. on June 17. Later that evening at 5 p.m., the BFSA will hold its Juneteenth Celebration, focused on rebuilding community and honoring Black ancestors. 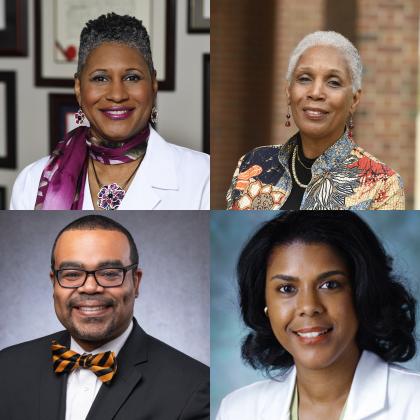 The weekend will end with the Indispensable Role of Blacks at Johns Hopkins' 10th anniversary gala, held at 7 p.m. on Saturday, which will be an evening of dinner, music, dancing, and acknowledgements of the 2022 inductees, past inductees, and the BFSA presidents who have supported and nurtured the project over the years.

The Indispensable Role of Blacks at JHU digital exhibit is co-sponsored by the Johns Hopkins Black Faculty and Staff Association, the Office of the President, and the Office of Diversity and Inclusion. This year's inductees join over 80 individuals who have been previously recognized for their lasting contributions to the university's rich history, and who have brought honor to the university through their achievements.

Profiles of all previous inductees can be found on the exhibit's website. To nominate individuals for the next class, use the Indispensable Role of Blacks at JHU nomination form. Nominations are open through October.

Katharine M. Graham Professor of Ophthalmology and the first African-American to be named full professor at the Wilmer Eye Institute

"The first time I was involved with retinal surgery was like meeting the person you're going to marry," says Sharon Solomon, a professor of ophthalmology at Johns Hopkins. "I knew this was what I was going to do for the rest of my life." After completing her medical training at the University of California, San Francisco, she secured a fellowship at the "mecca of ophthalmology:" the Johns Hopkins Wilmer Eye Institute, where she became the first African-American to be named a full professor.

Grateful patient benefactors have enabled Solomon to set up novel research projects and programs to conduct basic research on the etiology of idiopathic macular holes, her surgical specialty. The effort has since evolved into a nationwide study funded by the National Eye Institute, with Solomon as principal investigator.

"One can never lose sight of the academic mission," Solomon says. "Regardless of race, regardless of gender, at a place like Hopkins, one puts her nose to the grindstone and does what must be done."

Sherita Hill Golden joined Johns Hopkins for a medical residency in July 1994, and the young doctor appreciated the presence of so many Black support staff. "They were very proud when they saw a Black doctor, even if you were an intern," she recalled. In fact, it was a unit clerk who introduced her to her future husband. "One of the things that makes Hopkins such a special place is not just the intellectual capital of the faculty but the dedication of the staff. It's those human relationships that people don't always see that make a difference for many of us here."

She developed a passion for health disparities and the factors that affect diabetes and heart disease. Recognizing a correlation between chronic stress and depression and the risk of developing diabetes, she employed the tools of population science to identify novel hormone risk factors as contributors to diabetes. The system of checks and balances now in place for patients with diabetes throughout the Johns Hopkins Health System resulted directly from Golden's clinical, research, and educational efforts.

In her current role as vice president and chief diversity officer for all of the Johns Hopkins Medical Institutions, Golden partners with administrative peers on other Hopkins campuses to align their approach to diversity awareness training for all staff and students.

Native Baltimorean and librarian Sharon Morris joined Johns Hopkins in 1992. Beyond her professional responsibilities at the Sheridan Libraries, Morris has held numerous positions and offices in the BFSA. Perhaps her most outstanding contribution has been initiating, steering, and sustaining efforts that evolved into The Indispensable Role of Blacks at Johns Hopkins. "Indispensable was the term we decided best described what we were trying to do," Morris remembers.

Before her retirement in 2022, Morris was director of the Washington, D.C., Regional Libraries for Johns Hopkins, delivering services, providing research support, and designing and teaching library instruction and research skills for faculty and students. Under her leadership, one of her projects, Avoiding Plagiarism, was adopted as a required learning module for students in several schools. In her professional life, Morris also saw the need and helped establish an informal network of Black librarians in Maryland. The group is collaborating to form a statewide, official Black caucus within the ranks of the Maryland Library Association, with Morris serving as its inaugural president. "I remain involved in highlighting the role and value of Black accomplishments," she says.

Maryland State Senator Charles Sydnor III discovered his political gifts as an undergraduate at Johns Hopkins. A native of Baltimore, he quickly became active with the university's Black Student Union, serving first as its education chair, which led to a job helping the Office of Admissions recruit African American students from city high schools. Sydnor also developed a passion for history at Hopkins and was particularly drawn to learning about the civil rights movement. For his thesis, he wrote about one of the first attempts to desegregate Johns Hopkins University in the 1930s. He also became active behind the scenes in local politics and began thinking about how to use his history degree to spark interest in educational policymaking. He was elected to the Maryland House of Delegates in 2014 and was named to replace his state senator in 2019.

"It means a lot to represent my hometown. I tell my constituents that I am the reification of regionalism." Redistricting now confines Sydnor's legal representation to Baltimore County but, he says, "I joke with people in Baltimore City that, whatever's going on, they've still got my support."