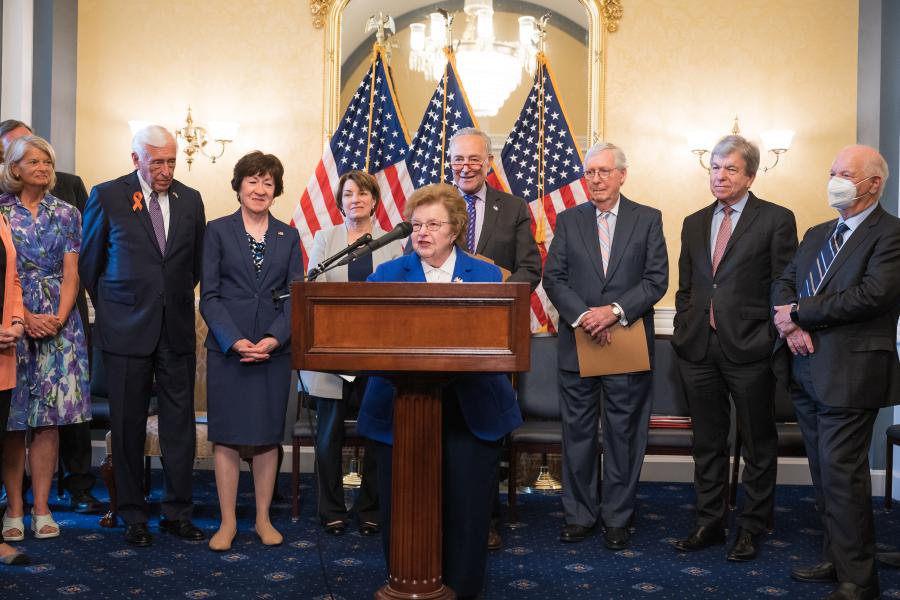 A unanimous, bipartisan Senate resolution renamed a room in the U.S. Capitol after the trailblazing female senator and Homewood Professor of Public Policy, dedicated June 8

Former U.S. Sen. Barbara Mikulski, Homewood Professor of Public Policy at Johns Hopkins, is one of two trailblazing female senators celebrated at a dedication ceremony June 8 to rename rooms in the U.S. Capitol in their honor.

Out of more than 540 rooms in the Capitol, these are the first to be named after women senators, Mikulski and Margaret Chase Smith, a longtime legislator from Maine who died in 1995. The gathering on Wednesday included Senate Majority Leader Chuck Schumer, Senate Minority Leader Mitch McConnell, Maryland Senators Ben Cardin and Chris Van Hollen, Maine Senators Susan Collins and Angus King, and Senators Amy Klobuchar and Roy Blunt, who led the resolution.

For years, there wasn't a single room in the Capitol named after a female senator—so @RoyBlunt &amp; I set out to fix that. This week, we held a dedication for the Margaret Chase Smith &amp; Barbara Mikulski rooms. What a joy to celebrate these women (&amp; to have Senator Mikulski join us)! pic.twitter.com/IXMg3NUBrd

"I am so honored to be celebrating the dedication of the Barbara Mikulski Room and the Margaret Chase Smith Room in the Senate. My genuine thanks for doing this, because I know this is truly a very huge honor," Mikulski said at the dedication. "I would hope that when people see these two rooms…that they are inspired today about service, about duty, about respect for the Constitution and for each other. I am very grateful to have a room of my own in the United States Senate, but I want to share it with all of you and the American people."

"As folks in Maryland know, when Senator Barb is with you, the force is with you," Van Hollen said. "Her legacy of fighting for Marylanders and our nation lives on throughout the halls of the Capitol—which is why our dedication of the new Mikulski Room in the Senate today was such a fitting tribute to her years of public service."