The society celebrates students who exemplify academic and personal excellence, allowing them to connect with a network of scholars 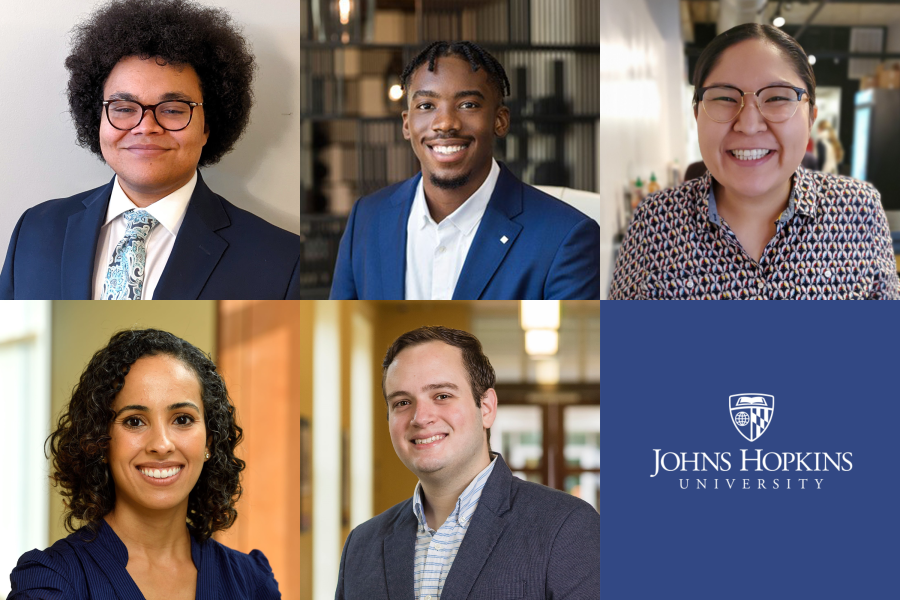 In recognition of their academic achievements and commitments to diversity, five Johns Hopkins PhD students were inducted into the university's chapter of the Edward A. Bouchet Graduate Honor Society during a ceremony held Tuesday evening in Mason Hall on the university's Homewood campus.

The Bouchet Society honors Edward Alexander Bouchet, who, in 1876, became the first African-American doctoral recipient in the United States. Designed to develop a network of scholars who exemplify academic and personal excellence and who foster a community of support, the society recognizes students who serve as examples of scholarship, leadership, character, service, and advocacy for those who are traditionally underrepresented in higher education.

"Bouchet was the true embodiment of what it means to be a civically engaged scholar," said university President Ron Daniels during opening remarks at the ceremony. "Even though we know so little about him, it is clear that his legacy is one defined by leadership, scholarships, service, and advocacy. And you, our inductees, are carrying forward these foundational beliefs, values, and principles, each and every day in the fields, disciplines, and communities in which you are so intrinsically a part." 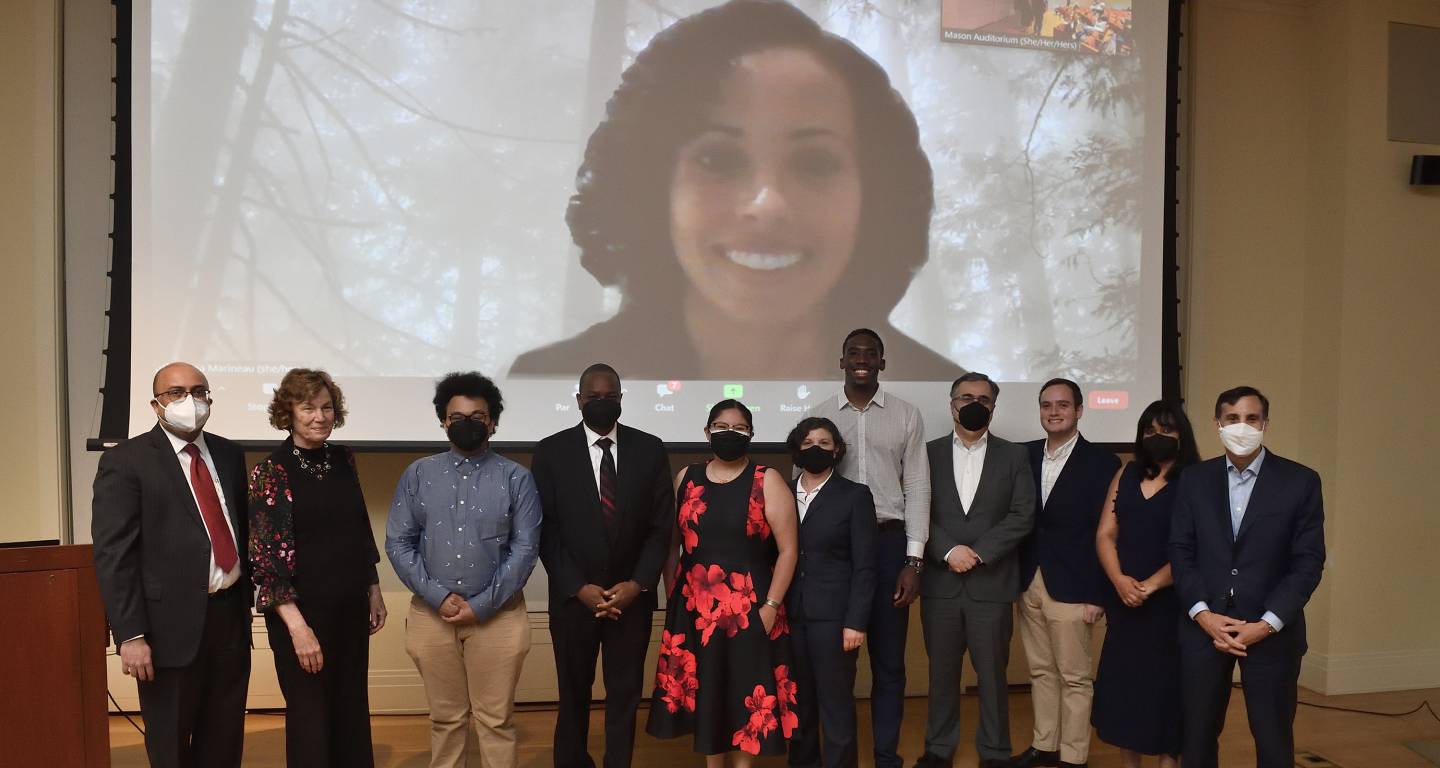 The cohort of honorees were invited to attend an annual conference in April at Yale University, one of the founding chapters of the society, and will join members from the society chapters at 19 American universities.

Burnett's experience with the Teaching Academy program in the Center for Integration of Research, Teaching, and Learning has allowed him to learn and employ equitable and culturally responsive teaching practices in his work. Outside of the classroom, he volunteers and advocates for greater access to science education; his volunteer efforts have been recognized by the Martin Luther King Jr. Award for Community Service. Ultimately, Thomas aspires to be a leader in academics and research to make science and education a more equitable endeavor.

"Beyond his research and scholarship, Thomas' commitment to service, to mentorship, to those in scientific pathways behind him, and to inclusive excellence more broadly has been immeasurable," said Damani Piggott, associate vice provost for graduate diversity and partnerships, associate professor of medicine, and Burnett's mentor.

Brent Ifemembi is a PhD candidate in chemical and biomolecular engineering. His research focuses on using novel microfluidics for cancer diagnosis and prognosis, as well as isolating highly aggressive cancer cells to predict novel therapies through single-cell RNA sequencing for breast cancer and glioblastoma patients.

Ifemembi is a Gates Millennium Scholar who earned a bachelor's degree in chemical engineering and biomedical engineering, as well as a master's degree in biomedical engineering, from Carnegie Mellon University. While at Hopkins, Brent has served as the co-chair of the Black Graduate Student Association; organized community outreach fundraisers as treasurer of the Chemical and Biomolecular Engineering Graduate Student Liaison Committee; and was a member of the Planning Committee for Horizons by Hopkins, a university-wide doctoral conference for professional development.

"Since joining Hopkins, Brent has lived up to his very high promise in every manner," said Konstantinos Konstantopoulos, a professor of chemical and biomolecular engineering and adviser to Ifemembi.

Beyond his research, Ifemembi is passionate about entrepreneurship, and he's gained experience with high-level biotechnology companies through the Passport to Future Technology Leadership program. Ifemembi aspires to lead his own company, where he can leverage his education and experience to make a tangible impact on public health.

Natalie Joe is a PhD candidate in cellular and molecular medicine at the School of Medicine. Her research focuses on anti-cancer treatments, specifically advancing therapeutics in triple-negative breast cancer through the repurposing of an antiparasitic drug.

A first-generation college and graduate student who grew up on the Navajo Nation, Joe graduated from Fort Lewis College with two bachelor's degrees in cellular and molecular biology and biochemistry. As the recipient of an NIH-MARCH Research Grant Scholarship, Joe conducted inorganic chemistry research for three years in Aimee Morris' laboratory; following her research, Joe co-authored two publications on anti-cancer prodrug syntheses. Joe has also been published in Endocrine Related Cancer and was the recipient of a Ford Foundation Predoctoral Fellowship. She will continue her postdoctoral training as a 2022 NCI Cancer Prevention Fellow, spending her first year at the Johns Hopkins Bloomberg School of Public Health to earn a master's degree in public health.

"In addition to her scholastic and research accomplishments (which are many), Natalie has focused on outreach and volunteering, making this a very important time for her here at Hopkins," said Daniele Gilkes, an assistant professor of oncology who serves as Joe's mentor.

While completing her PhD, Joe earned the Teaching Academy Certification and volunteered to co-teach science sessions to elementary school students. Joe aims to eventually use her experience to direct a program to empower the next generation of Indigenous scientists.

Lea A. Marineau is a PhD candidate at the Johns Hopkins University School of Nursing who studies the unmet needs of violence-impacted populations. Her research focuses on understanding multi-level factors associated with recurrent assault-related injuries among Baltimore adults.

Marineau has worked as a nurse practitioner in a variety of settings, including in underserved communities. Since 2014, she has been a nurse practitioner in the orthopedic trauma service at the University of Maryland's Shock Trauma Center. In recognition of her research efforts, Marineau received the Ruth L. Kirschstein National Research Service Award (F31) awarded by the National Institute on Drug Abuse. As a Fulbright Scholar for the 2021-22 cycle, she is working to describe the relationship between violent injury and substance use among adults in Cape Town, South Africa. She joined the induction ceremony from Cape Town via Zoom.

"I have mentored many PhD students in nursing, and you don't want to pick out favorites, but Lea has always just astounded me in everything she does," said Jacquelyn Campbell, a professor of nursing and Marineau's faculty mentor.

Outside of her research, Marineau is dedicated to becoming an academic nurse educator. She completed the Nurse Faculty for the Future Fellowship and is a certified nurse educator. She co-authored a book chapter on antiracist pedagogy and has worked with faculty and students at the School of Nursing to establish best practices for teaching about race and racial health disparities. Marineau is also committed to increasing enrollment and support of underrepresented students in graduate programs. She has volunteered as a tutor with Prison to Professionals and is currently volunteering as a mentor with the Diversity Postdoctoral Alliance Committee HBCU Mentoring Program.

Gian Carlo Molina-Castro is a PhD candidate in neuroscience at the Johns Hopkins University School of Medicine. A National Science Foundation Graduate Research Fellow, Molina-Castro's research focuses on defining the dynamics and functional significance of remyelination in the cerebral cortex of two animal models of multiple sclerosis. He earned a bachelor's degree in cellular and molecular biology from the University of Puerto Rico, Rio Piedras, as well as a professional certificate in non-profit management from the University of Puerto Rico, Mayaguez.

He is a senior fellow at PHutures, a university-wide doctoral hub to the support the professional development, alumni connections, and growth opportunities for PhD students and postdoctoral fellows at Johns Hopkins. Molina-Castro designs and executes programming and strategy, including digital content, curricula, microcredentials, data-driven hiring events, and virtual conferences.

"I cannot possibly begin to encompass the impact he's had not just on the lives of his peers and community, but the defining role he has played helping me shape the brand and vision of the PHutures office," said Roshni Rao, executive director of PHutures.

Molina-Castro is also co-president of Project Bridge, a university-wide organization focused on science communication and outreach, where he leads an executive board to plan and execute recurrent initiatives in the Baltimore community. He is also a member of the Doctor of Philosophy Board, which conducts PhD program reviews and advises the provost about university-wide doctoral education and institutional policies.

In addition to his research and leadership, Molina-Castro is committed to diversity, equity, and inclusion, and he is currently leading the execution and implementation of a two-year career exploration, professional development, and mentoring cohort-based program, as well as a networking panel series for underrepresented doctoral students at Hopkins. He was recently recognized with the inaugural 2021 JHU Career Impact Award and the 2021 JHU Diversity Recognition Award. An aspiring strategy consultant, he has also worked with local minority-owned small businesses through the Johns Hopkins Graduate Consulting Club.