Two from Johns Hopkins elected to National Academy of Sciences

Microbiologist Arturo Casadevall and neuroscientist Alex Kolodkin have been selected to join the National Academy of Sciences, a society of distinguished scholars charged with providing independent, objective advice to the nation on matters related to science and technology. Scientists are elected for membership by their peers in recognition of their outstanding contributions to research. They are among 120 members and 30 international members selected for membership this year. 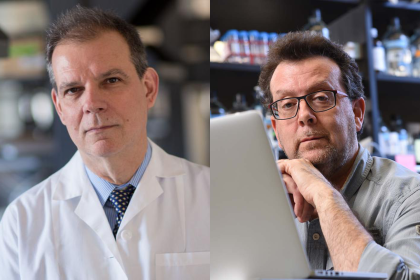 Casadevall is the Bloomberg Distinguished Professor of molecular microbiology and immunology and infectious diseases. He holds appointments in the Department of Molecular Microbiology and Immunology at the Bloomberg School of Public Health and in the Department of Medicine Division of Infectious Diseases in the School of Medicine. His research focuses on the origin and development of fungal and bacterial diseases and how organisms respond to infection. He has made major contributions to our understanding of how fungi evade immune responses in hosts and has proposed and developed therapeutic strategies for a variety of human diseases including melanoma and infectious diseases such as tuberculosis and COVID-19.

Kolodkin is the Charles J. Homcy and Simeon G. Margolis Professor in the Department of Neuroscience at the School of Medicine. His research focuses on how neuronal connectivity is established during embryonic and postnatal development. He leads projects that are investigating cellular and molecular mechanisms that affect the visual cortex and the neocortex, a section of the brain involved in high-level function such as sensory perception, cognition, and language.

He holds a BA from Wesleyan University and a PhD from the University of Oregon, and served as a research associate at the Yale University School of Medicine and as a postdoctoral fellow at the University of California at Berkeley. He serves on the editorial board of Neuron and on the review boards of several federal and private funding agencies. Among other career recognitions, he has received the Javits Neuroscience Investigator Award from the National Institute of Neurological Disorders and Stroke, the Pradel Research Award of the National Academy of Sciences, and in 2020 was elected a member of the National Academy of Medicine. He has served on the Johns Hopkins faculty since 1995.