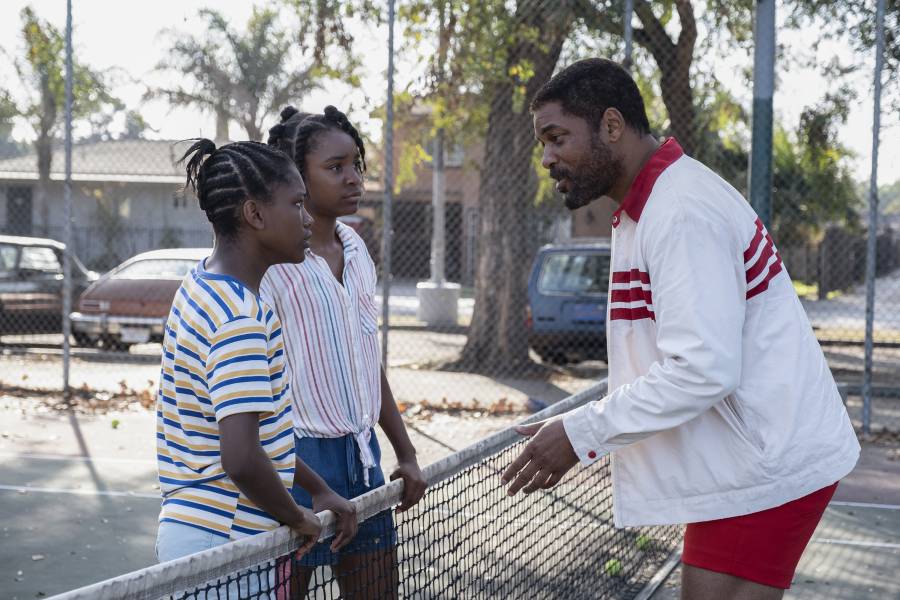 Image caption: From left to right, Demi Singleton as Serena Williams, Saniyya Sidney as Venus Williams, and Will Smith as Richard Williams in a scene from the film King Richard.

Scripting the career he always wanted

Oscar-nominated for Best Original Screenplay, Film & Media Studies alum Zach Baylin discusses Hollywood detours and doing justice to one of the most misunderstood figures in sports in 'King Richard'

A funny thing happened to screenwriter Zach Baylin, A&S '02, on the way to the 2017 U.S. Open. He'd stopped off to meet with producer Tim White (The Post, Ingrid Goes West) about a project he didn't ultimately land. On his way out, Baylin casually mentioned that he was headed to the tournament. "If you like tennis," White said, "I have a really good idea for a movie."

That movie turned out to be the Oscar-nominated biopic King Richard, which casts Will Smith as Richard Williams, the father who famously raised Venus (Saniyya Sidney) and Serena Williams (Demi Singleton) to become two of the greatest athletes of all time. Baylin's script follows the family from the neglected, sometimes dangerous Compton, California, tennis courts where Richard spent years refining the girls' skills to Venus' meticulously planned professional debut—all propelled by Richard's tireless coaching and facilitated by their practical-minded mother, Oracene (played by Aunjanue Ellis). Its portrait of Richard is inspirational yet nuanced, highlighting the love and encouragement he lavished on his daughters without denying his stubbornness or glossing over the rough spots in his marriage. 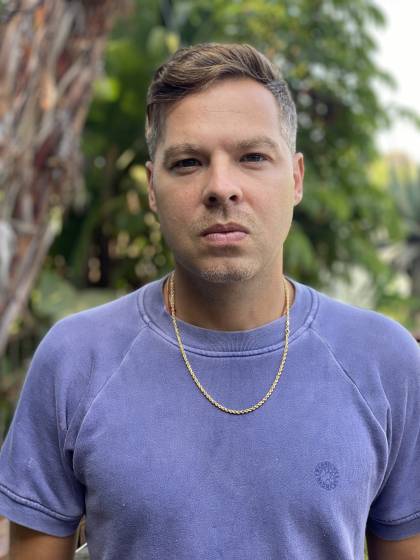 Released to widespread acclaim this past November, the film is already an awards-season juggernaut. Smith's layered performance earned top honors from the Screen Actors Guild and the NAACP. But Oscar night promises to be especially gratifying for Baylin. Among King Richard's six Academy Awards nods—including Best Picture, Best Actor, and for Ellis, Best Supporting Actress—is Best Original Screenplay. (He was also nominated for awards from BAFTA and the Writers Guild.) On Feb. 8, Baylin and his wife, collaborator, and fellow Hopkins alum Kate Susman, A&S '02, co-founder of the couple's production company Youngblood Pictures, were up before dawn at their Los Angeles home to watch the nominations livestream. When they heard his name, the couple screamed so loudly, they woke up their 8-year-old daughter and 6-year-old son. "They were really excited," Baylin recalls, though he jokes that "they were probably more excited that The Mitchells vs. the Machines got nominated."

King Richard would have been a crowning achievement for even the most accomplished writer. But what makes Baylin's story so remarkable is that the film also comprises his first official screenwriting credit. Although he sold his first option, "for 500 bucks or something," just two years after graduating from Hopkins—where his coursework as a Film and Media Studies major ignited a passion for screenwriting—his career, like so many in the entertainment industry, has been marked by fascinating detours. After starting out in commercial video production, Baylin worked for more than a decade in the art departments—where his role could include anything from building sets to managing props—of films like Dave Chappelle's Block Party and TV series including Boardwalk Empire and Girls. Meanwhile, he kept writing and was ultimately able to stop taking those grueling production gigs. Hollywood being Hollywood, though, it still took some time for him to find a project with enough star power and industry momentum to make it into production.

The Hub spoke with Baylin, a few weeks after his Oscar nomination, about building the career he always wanted, working with the Williams family and doing justice to one of the most misunderstood figures in sports.

It's frustratingly common to be a working screenwriter for several years before one of your scripts actually goes into production. What was that transitional period like, when you were making a living but not seeing your projects come to fruition?

The first thing I ever really got paid for was a television pilot. Sometimes it takes someone with a name to give the project visibility, and so [the rapper and actor] Common came on board this TV show and we sold it to TNT. It was a life-changing moment. But then I worked on that show for a year at TNT and they decided they weren't going to make it. That was really disappointing, but by that point people were reading my work and I was being put up for other development jobs.

Producers and studios have books or articles that they've optioned, or they have [original] ideas, and they hire writers to write those scripts. Then they decide whether or not they're going to sink more money into trying to make them. So many stars have to align. There's so much money involved. A lot of times you get really close and then an actor takes another project or someone [at the studio] decides that they've already done something similar and they back out at the last second. And then this whole house of cards falls apart.

When did you realize that King Richard was going to be different—that it was actually going to get made?

After I wrote the script but before we approached the Williams family, it got into Will Smith's hands. He said that he was interested in doing it if we could get the family involved. Then the producers and I had to make a connection with Venus and Serena and get them to hear us out—to read the script and to endorse our vision as the path they wanted to take into telling their story. A lot of people had already approached them before about making their movie. That took a year of trying to show up at places where we thought they were going to be with the script.

We finally sat down with Isha Price, their sister who became a producer on the project, at the U.S. Open in 2018. She agreed to read the script but essentially said: "We're probably not going to do this." We got a call the next day. She was like, "I read the script, and I think if you guys are willing to hear our notes and experiences, then actually we would like to do it with you." That's when it seemed like, if we don't screw this up, it could really happen.

"I could relate to Richard's journey in that respect, of having an ambition and having seen it fail a few times and wondering if it was ever going to happen."

Did you ever get a sense of why the family decided to work with you?

Yeah. The window that we focused on in the movie—that it was about those years when the family unit was together, and about the five sisters [Venus, Serena, and Oracene's three daughters from a previous marriage] and their collective effort to reach success—was a huge part of it. And they wanted a movie that focused on their father. I think they felt he had been misrepresented and maligned. They probably imagine that there are several movies that could be made about their lives. But while their father was alive, a movie that centered him in their story was something they were really interested in.

I think it came down to those two story decisions and the fact that when I sat down with them, I said: "I know there are things in the script that I probably didn't get right, because we'd never met." There was a lot of archival research I was able to do. But to get accuracy on their family dynamics, of what they were feeling, what their voices were like, we really wanted their involvement. And I think being open about that was the other thing that got them to open up.

You frame Richard as a complicated person, but ultimately as a good father who always had his daughters' best interests at heart. Was that a tough balance to strike?

The conversation from the beginning, with Tim White, was that Richard's story could be the greatest coaching story in sports, but that he had been a character within the tennis community who was seen in a controversial, negative light in the '90s and early 2000s. I've since had lots of conversations with people who, when I say I've made a movie about Richard Williams, are like, "Oh, he's kind of a jerk, right?" And I say, "Well, no, he's a complicated guy, but he's not the domineering sports dad that you might think of." The surprise, to me, was that while Richard's persona could be brash and self-serving and larger-than-life and contentious, inside the family and on the court with those girls, he was very gentle and very encouraging and wanted them to have fun.

Zach Baylin knew he could tell the Williams sisters’ story. But did they?

Did your experience as a father of two young kids help shape the way you thought about Richard's story?

My daughter was four when I started writing the script, and I had not written anything about parenting or a parent's aspirations for their family. I really latched onto that part of the Williams' journey. I don't know that I was aware of it at the time, but looking back, I was in my late 30s and working in the job that I wanted but hadn't solidified a real career because I hadn't had a movie made. I was frustrated that I hadn't gotten there yet. So I could relate to Richard's journey in that respect, of having an ambition and having seen it fail a few times and wondering if it was ever going to happen. I knew that if things didn't break in the right way eventually, that my desire to be a writer was going to have to take a backseat to what was best for setting up my kids' lives.

You were present on set throughout King Richard's production. After so many years of working in that environment, but in a totally different capacity, what was it like to watch an entire cast and crew come together to bring your words to life?

It was incredible. It was surreal. I had been a professional writer for a number of years, but I'd literally never heard an actor read anything I'd written until the table read for this movie. And I'd been on a million sets, but never for something that I had written. So for this to be the first one, with Will and the Williams family—it still feels unbelievable. I knew not to take it for granted, because I know how ephemeral this all can be, so it was a real pleasure the whole time.