Three Johns Hopkins professors and a School of Medicine fellow have received grants for their research through the Bisciotti Foundation Translational Fund.

Established with a generous multiyear gift from the Stephen and Renee Bisciotti Foundation, the fund provides $300,000 annually in seed money to advance Johns Hopkins discoveries on a commercial path. Recipients are awarded between $25,000 and $100,000 to conduct their work during a period of up to nine months.

For this year's funding round, 14 applications were submitted. Five finalists presented their work in late January to an outside panel of researchers, scientists and investors.

Each applicant has made a report of invention to Johns Hopkins Technology Ventures. 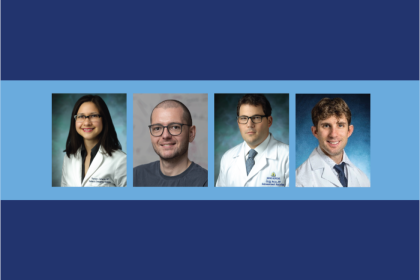 "Thanks to the generosity of the Bisciotti Foundation, the investment committee was able to fund three projects that could have a meaningful impact on clinical practice and patient care," said Brian Stansky, director of FastForward, JHTV's accelerator program. "We are excited about these opportunities and look forward to working with the faculty members on both their funded projects and longer-term commercialization efforts."

Applications for another translational fund, the Louis B. Thalheimer Fund for Translational Research, are due April 1.

The following researchers and their projects received the Bisciotti Foundation Translational Fund grants.

The pitch: Software that can diagnose strep throat based on a cellphone photo

Telehealth doctors caring for sore throats —which account for up to 10% of all pediatric visits— either send patients out for a throat swab or prescribe antibiotics if they suspect strep throat. In-person visits can take several hours, while prescribing antibiotics without a throat swab might be unnecessary and could lead to unwanted side effects or the proliferation of drug-resistant bacteria.

Canares, director of pediatric emergency medicine digital health innovation, and Unberath are developing a machine-learning algorithm that screens for strep throat based on throat images a patient captures and uploads with their cellphone. The researchers are expanding their dataset of throat images and related information. They will use this dataset to train the model that the algorithm employs to distinguish strep throat from an ordinary sore throat while also accounting for race, sex, ethnicity and age to minimize bias. The results are sent to the patient's doctor, who can then use the information to assist in treating the patient.

Johns Hopkins Technology Ventures is working with the inventors to patent the technology. Canares and Unberath plan to use the funding to enhance the accuracy of their machine-learning algorithm and develop a prototype of the patient-user interface. Canares would like to form a startup to provide a platform for mobile, artificial intelligence-driven medical diagnoses for common childhood illnesses.

The pitch: An ultrasound of the heart that does not require anesthesia

During a transesophageal echocardiogram, or TEE, a probe is inserted down the esophagus. It offers clear images of the heart compared with imaging through the chest, where an ultrasound can be affected by interference from the lungs, scars, and fat tissue. But, the device requires the patient to be under anesthesia, which places the patient at increased risk of complications such as cardiac arrest, respiratory failure, and even death.

Tumarkin and David Armstrong, a clinical cardiovascular fellow at Vanderbilt University Medical Center, want to insert the probe through the nose, negating the use of anesthesia while increasing the procedure's availability and decreasing the cost. Additionally, patients could go home immediately after the procedure.

Tumarkin and Armstrong have performed proof-of-concept experiments and developed several prototypes. Funding will go toward further prototype development as well as purchasing standard TEE probes for comparison testing. JHTV is pursuing patent protection for the technology.

The pitch: A feeding tube that can be replaced at home instead of at a hospital

Feeding tubes are recommended to be replaced every six to 12 months, but they often fail in as little as three months because of clogs or cracks. Replacing a feeding tube requires at least 24 hours in a hospital or outpatient facility. A large medical team is required to perform the procedure, and the patient is at risk from exposure to anesthesia and radiation (due to the use of the fluoroscopy for imaging), in addition to being without needed food and medication.

Weiss, working with radiology colleague Christopher Bailey and medical student and biomedical engineer Aryaman Gupta, developed a device with a durable outer sheath and replaceable inner feeding tube that can be swapped out at a patient's bedside or at their doctor's office without anesthesia, meaning food and medication delivery can restart immediately. Weiss, medical director for the Johns Hopkins Center for Bioengineering Innovation and Design, estimates the technology would cut hospital visits for feeding tube repairs in half and free up nine weeks of a physician's time each year to perform other procedures.

JHTV is pursuing patent protection for the technology and is working with Weiss on finding potential licensors for the technology. The Bisciotti Fund grant will go toward developing a prototype and validating the technology, as well as starting on the path to device approval from the U.S. Food and Drug Administration.