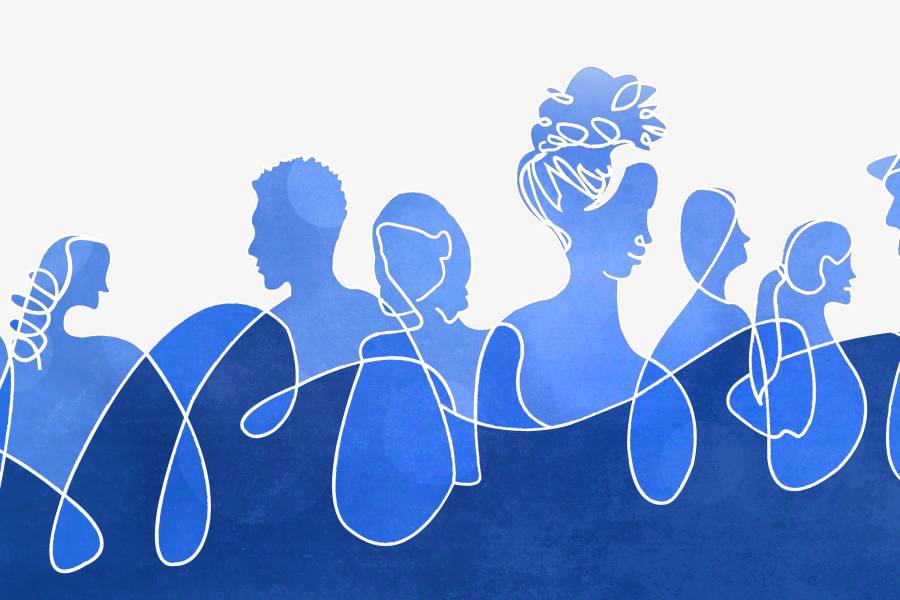 The university is continuing the important work it began more than six years ago to make Johns Hopkins a more diverse, equitable, and inclusive place for all, learning from past experience and building a durable foundation as it pursues bold goals and aspirations

Five years after publishing the first JHU Roadmap for Diversity, Equity, and Inclusion, Johns Hopkins University is launching a second phase of the work, building on recent successes and looking more closely at areas where progress has been slow.

Friday marks the ceremonial beginning of the university's implementation of its Second JHU Roadmap for Diversity, Equity, and Inclusion, which invites a bigger, broader, and more diverse group to join the conversation as the university pursues bold aspirations and endeavors to realize the promise of fully embracing and celebrating both what makes us unique and what unites us as a community.

There is still much work to be done, but by all accounts, Johns Hopkins is now better positioned than ever before to do it.

"There's an important framework that diversity, equity and inclusion professionals use when they talk about the dignity of each person—the idea that we all have a value that we bring to this conversation," said Katrina Caldwell, JHU's vice provost for diversity and inclusion and chief diversity officer. "We all have individual and group identities that mean important things to us. We come from families and communities that have contributed to who we are as individuals, and we bring all of that to Hopkins. Those of us who work here every day, who study and learn here every day, and who contribute to this great community, we want to bring our full selves to this institution. And we want people to respect and respond to that fullness and give us an opportunity to contribute to what we know is a great place to live and learn and work."

"We believe that creating an environment in which each individual can flourish and bring their best to the institution is what makes Hopkins a really special place."
Ron Daniels
President, Johns Hopkins University

On Friday, JHU will host two virtual kick-off events that will include messages from university leaders and leading experts in diversity, equity, and inclusion work, as well as information about the implementation and execution process. The first event, which begins at 11 a.m., will include keynote remarks from Freeman Hrabowski, president of the UMBC, as well as a discussion of accountability, investments, and an implementation timeline for the new Roadmap. A session beginning at 3 p.m. will feature expert speakers discussing cutting-edge strategies to advance diversity, equity, and inclusion efforts as well as an opportunity to participate in breakout rooms before the event concludes with a closing celebration.

Individuals interested in participating should register in advance online; they will receive an event link via email.

The events come at an inflection point for Hopkins as it prepares to pursue the 24 goals articulated in the second Roadmap, building on the objectives broadly articulate in the first Roadmap in 2016—achieving greater diversity within the JHU community, improving opportunity for all, enabling a free exchange of ideas and perspectives, and fostering a climate of respect.

"As we indicated in the first Roadmap, a diversity of backgrounds, perspectives, and experiences is essential to a vibrant, pluralistic community," JHU President Ron Daniels said. "We believe that creating an environment in which each individual can flourish and bring their best to the institution is what makes Hopkins a really special place. … We're determined to continue to strengthen the diversity, inclusion, and equity of this community."

A strategic plan as ambitious in scope as JHU's second Roadmap requires a strong foundation and targeted investments. In recent years, the university has deliberately and methodically put some of those pieces in place, the first steps in building a robust DEI structure.

In many ways, the effort to elevate and expand the DEI framework at Johns Hopkins resembles similar efforts at institutions across the country. Over the past 20 years, the work of diversity practitioners, once largely concentrated in student-facing roles and offices of multiculturalism, has grown to include senior cabinet-level positions with direct lines to university presidents and chancellors, said Paulette Granberry Russell, president of the National Association of Diversity Officers in Higher Education, or NADOHE, who served as chief diversity officer at Michigan State University from 1998 to 2020.

She added that the most successful among them benefit from support, staffing, and a seat at the table alongside those in the top echelons of university leadership.

"You can't rely on one person to do this work," she said. "You have to build capacity and accountability."

Johns Hopkins has been doing just that. The first Roadmap called for the creation of a senior-level position dedicated to diversity, equity, and inclusion efforts—the university's first chief diversity officer, Fenimore Fisher, arrived 11 months later, in October 2017, and he was succeeded by Caldwell in July 2020. Over the past five years, the university's divisions have increased their focus in this area as well—in some cases creating full-time positions for individuals who advise the dean on DEI matters, in others adding related duties to the job portfolios of existing staff members. That has created an informal network of DEI practitioners stationed across the university, a group that meets monthly to network and problem-solve.

Those efforts have set the stage for this moment, when diversity, equity, and inclusion moves from the realm of institutional work and becomes the work of everyone at the institution. That means more positions devoted to DEI work, greater investments in that work, and more participants in a big, complex, and sometimes difficult conversation. 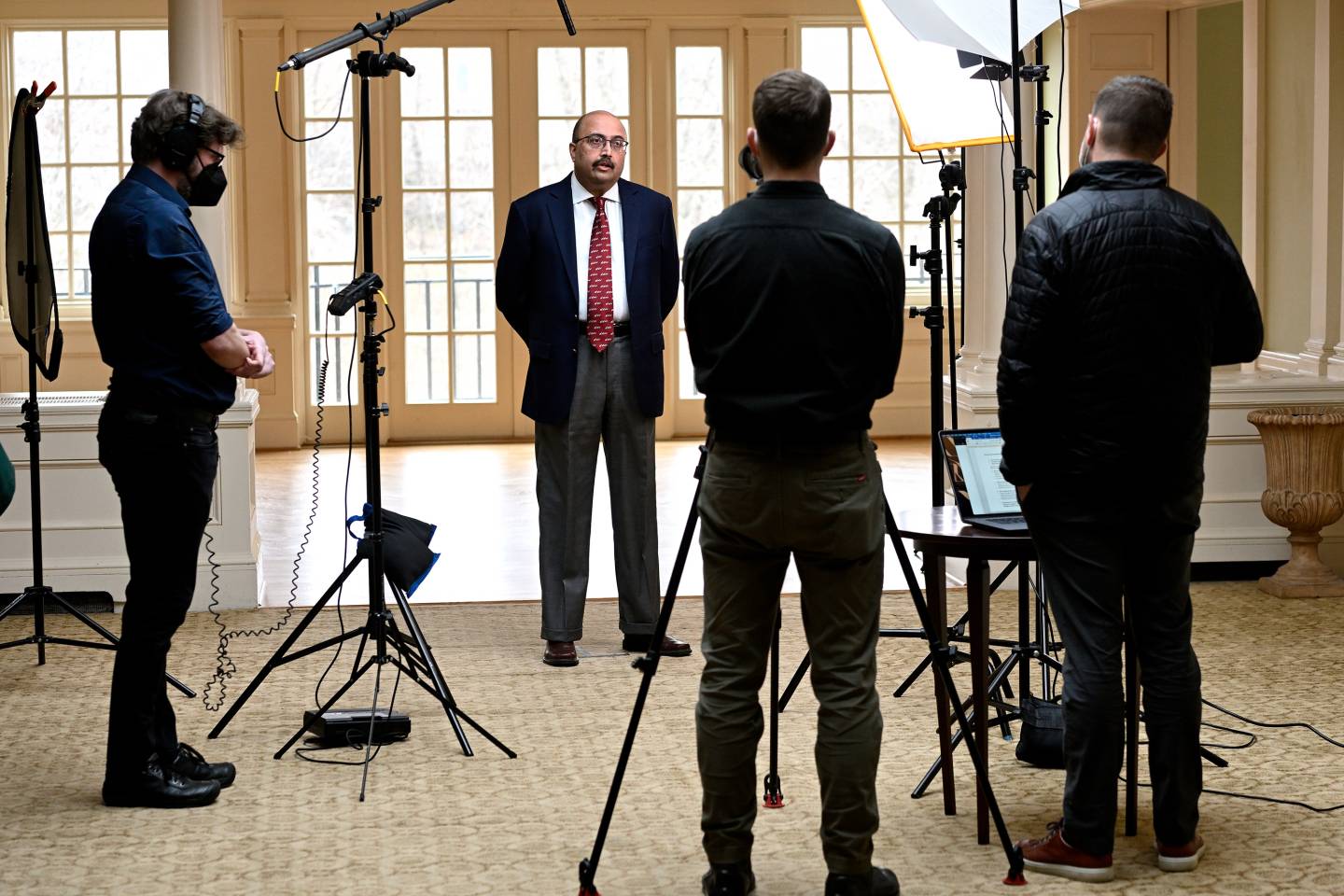 Image caption: "I believe in the mantra of inclusive excellence," says Sunil Kumar, Johns Hopkins University's provost and senior vice president for academic affairs. "I believe that by broadening our net and being more welcoming, we will bring in even more talented people to be part of our community."

Diversity efforts are often underfunded and offices responsible for the work understaffed, Caldwell says, but the second Roadmap seeks to address this concern explicitly. It also elevates the chief diversity officer to a position on the president's cabinet and establishes a DEI Coordinating Committee, a key mechanism for cross-divisional coordination that firmly establishes Caldwell as caretaker of the DEI agenda laid out in the new Roadmap.

"It's an evolution, an acknowledgement that some of these things need to be centralized," Caldwell says. "I think there's enough of an infrastructure and some noteworthy success in key areas where people are realizing that we can do some great things. But we're going to need more people, more help."

To that end, Caldwell has already started expanding her team, creating and filling five key roles:

Cultivating a community of advocates

Woolway has seen firsthand how the DEI landscape has evolved at Hopkins over the past eight and a half years. She joined the university as its first director of LGBTQ Life in 2013, where her initial experience was that she was "a single person in a single office operating in a vacuum to some degree."

Over time, she forged partnerships with others in similar, student-facing roles, leading to the creation of the Center for Diversity and Inclusion, which brings together LGBTQ Life, Religious and Spiritual Life, the Office of Multicultural Affairs, and Women and Gender Resources. The center aims to foster a sense of belonging for students by providing engagement and support.

She has also had a front-row seat as two university diversity plans were created, refined, and implemented.

"What has been really exciting over the years has been to see additional folks getting hired, additional resources being put in different areas, more structure around connecting different people who do diversity work," Woolway says. 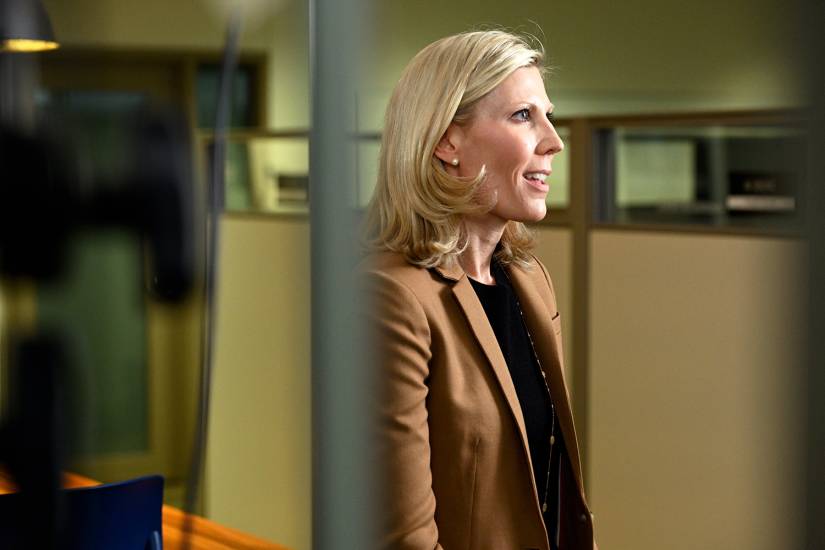 Image caption: "I think the biggest impact could be more people feeling empowered to push for progress," says Bonnielin Swenor, an associate professor in the schools of nursing, public health, and medicine and founder and director of Johns Hopkins Disability Health Research Center. "That's what I hope will happen, and a recognition that this work is a shared responsibility and a continual practice."

Those connections played a critical role in the process that led to the creation of the second Roadmap—its 24 goals are distilled from 65 recommendations made by the Roadmap 2020 Task Force, a 43-member group made up of faculty, staff, students, community partners, and alumni. The group included many of the university's most passionate and prominent DEI practitioners and advocates, among them Bonnielin Swenor, an associate professor in the schools of nursing, public health, and medicine and founder and director of Johns Hopkins Disability Health Research Center.

Swenor, motivated by her personal experiences with vision impairment, advocates for the disability community, urging that the experiences of people with disabilities be considered in decisions about research, education, and policy. She said she is heartened that the recent Roadmap process has included perspectives from the disability community and many others whose diversity is invisible and/or intersectional.

"This Roadmap, in my mind, really is an extension of the initial Roadmap," Swenor said. "But in some really important ways, it's recognizing that diversity, equity, and inclusion are a journey and not a destination. The second Roadmap is all about putting people on that journey and recognizing this is work we all have to do. It's a practice we do every day.

"Moments of change are often uncomfortable and reflective, and so I think change for this Roadmap will be just that—it'll be a series of hard conversations, of reflection about our own biases, listening to perspectives we don't agree with," she added. "But the change will be that discomfort being met with respect and openness for holding that space, for addressing bias, and for striving to be better."