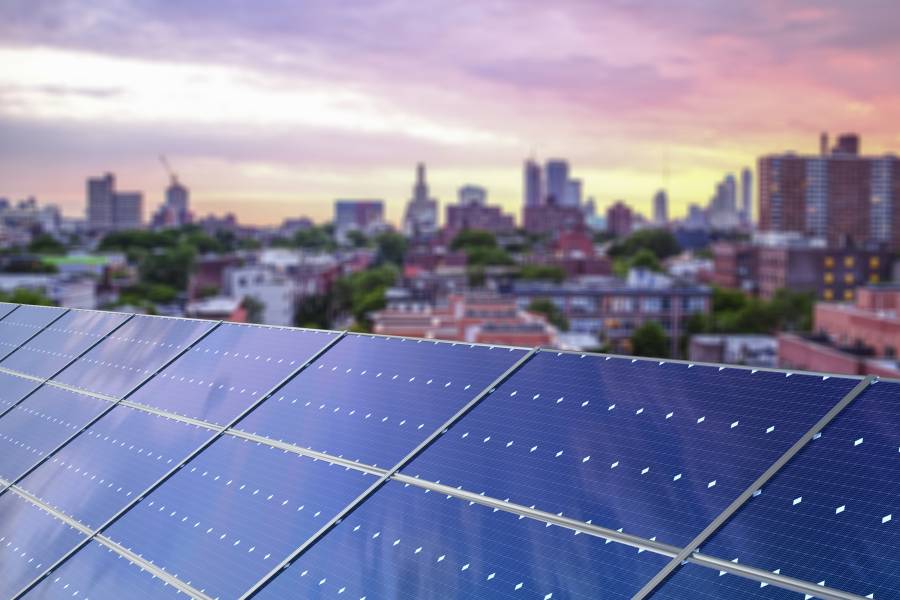 A group of experts is investigating options to expand the reach of solar power to new landscapes, such as solar-powered cars and self-charging cellphones

While solar energy is an asset in the Earth's battle against greenhouse gas emissions, its impact is still limited compared to its vast potential.

Much of the world's emissions come from off-grid power use, such as in the transportation sector and from the developing world, where large-scale energy grids don't exist. The current norm for harnessing solar energy for human use involves heavy solar cell panels that capture energy and immediately channel it through a grid to deliver it as electricity to consumers. That method's limitations—its reliance on the on-demand availability of sunlight and on large, cumbersome panels—make it difficult for solar energy to get a foothold for off-grid uses.

Under the auspices of an initiative called LITES, or Light-Integrated Technology for Energy Storage, experts at the Ralph O'Connor Sustainable Energy Institute, colloquially known as ROSEI, are exploring new solutions through the creation of lightweight, light-absorbing, and energy-storing materials to make solar-powered cars, self-charging cellphones, and myriad other possible off-grid uses. The initiative is led by a trio of ROSEI leadership councilmembers: Jeff Maranchi, a program area manager with JHU's Applied Physics Lab; Sara Thoi, an assistant professor in the Department of Chemistry; and Susanna Thon, an associate professor in the Department of Electrical and Computer Engineering.

"We're attempting to establish a whole new paradigm for solar energy where the generation and storage are integrated into one system."
Susanna Thon
Associate professor, Whiting School of Engineering

"We aren't trying to come up with just incrementally better ways to store solar energy; we're attempting to establish a whole new paradigm for solar energy where the generation and storage are integrated into one system," Thon said.

The group is using two different techniques to achieve this. The first involves the creation of new flexible, lightweight, high-efficiency solar technology with light-collecting capabilities. Maranchi, Thoi, and Thon are working to produce flexible colloidal quantum dot-based, or CQD, solar cells that can be sprayed like paint directly onto batteries to form an integrated power generating storage system. CQD cells work by absorbing both visible and near-infrared light.

The team says this approach could not only make wearable solar-powered devices possible, but also could lead to extended solar mobility and to the ability to store power for longer periods of time. The team is also working on technology that has the ability to tolerate extreme temperatures, making it useful in a variety of climates and environments.

The second approach focuses on photobatteries, referred to by the group as the "holy grail" of inexpensive, reliable, and mobile solar energy technology. Photobatteries integrate two functions into one device without sacrificing either energy generation or storage performance.

"Essentially, this is the creation of a battery that can both take in solar energy and then store it independent of needing to be on a grid," Thoi said.

To do this, the researchers plan to unite the photo-generation functionality of quantum dots with the charge storage capability of metal-organic frameworks, or MOFs, a versatile family of porous materials with atomically controlled structure and functions, into a single unit called the MOFdot.

"We could extend the mileage of our batteries by two or three times because as long as the sun is out, the battery shouldn't completely drain," Thoi said. "That's a big reason why we refer to it as the holy grail: We can remove ourselves from a grid entirely, and it gives you the mobility and portability that we don't currently have with solar energy."

Working with the Applied Physics Lab, known as APL, is also helping expand the possibilities of this research. Students from both Thoi and Thon's groups have access to the various workstations at APL's new state-of-the-art facility in Laurel, Maryland.

Before collaborating with ROSEI on the initiative, APL had already been focusing efforts on portable power generation. As a result, APL will give Thoi and Thon's students access to a variety of facilities, such as a dry room where researchers can work with lithium in a water-free atmosphere, and a battery synthesis lab that can help with creating new powders and coatings to go on batteries.

As Maranchi put it, it was as if "our partners wanted to jump in a swim lane that we were already in" when Thoi and Thon approached him about APL collaborating on the LITES initiative.

"The needs for safe portable power are expanding rapidly," said Maranchi. "The sheer number of electronic devices has skyrocketed over the years, but battery technology hasn't kept up with it. So, there is a lot of demand for us to develop solutions for that. What the LITES initiative is aiming to do by focusing it all on solar energy is a wonderful and obvious next logical step for us."

Maranchi sees this as the first of many collaborations between APL and ROSEI. APL has put a lot of focus in recent years towards sustainability efforts, and Maranchi thinks collaborating with ROSEI will be a great way to channel that energy.

"We have a lot of interest in an effort we've called 'environmental resistance' that encompasses everything ROSEI is trying to do, and it's all about preparing for climate change and trying to be better stewards of the Earth," Maranchi said. "In addition to the exciting research, we're viewing the LITES initiative as a way to increase the touchpoints between the two groups so it will be easy to set up future opportunities to work together."